Obj. ID: 44730  Memorial for Victims of British Bombing in the New Jewish Cemetery in Rhodes, Greece, 2014 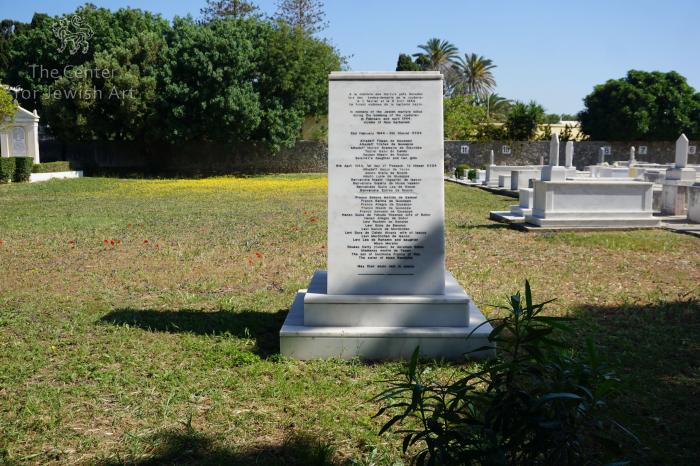 The monument is white marble hexahedron, block, constructed of thin white marble panels forming a cuboid block, about 1.5 meters high, with one sloping side. The block is set above ground level upon two step-like base levels, the top one smaller than the bottom. The inscribed face slopes backward toward the top. Only this front side – facing the path – is inscribed. There is a memorial inscription in French and English, followed by a list of names of victims of the two bombs. None of the inscription is in Greek or Hebrew.

Translation: In memory of the Jewish martyrs killed / During the bombing of the “juderia” / On February 2, and April 8, 1944 /
Victims of Nazi barbarism

In memory of the Jewish martyrs killed
During the bombing of the “juderia”
In February and April 1944,
Victims of Nazi barbarism

May their souls rest in peace 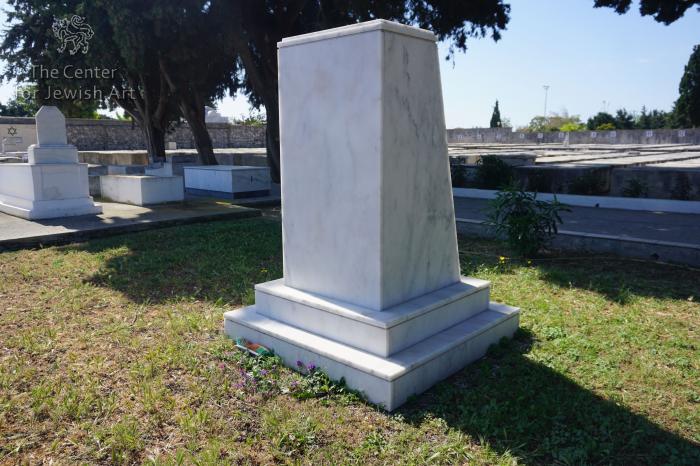 The memorial, dedicated in 2014, commemorates the Jewish victims of the British aerial bombing that leveled houses in the Jewish Quarter on February 2nd and April 8th, 1944. These were the first fatalities in the Rhodes Jewish community of the war and German occupation. Significantly, the memorial mentions “Nazi barbarism,” thus suggesting the Germans were the bombers, when in fact it was British Royal Air Force planes who carried out the attack.