Rimonim is the only periodical in the Hebrew language dedicated to Jewish art. It contains original studies on Jewish art and ethnography, which were originally published in this periodical, as well as selected articles from other publications that were translated into Hebrew. Rimonim is intended for use by Jewish artists and craftsmen as well as for teachers and students of Jewish culture who are interested in the information in the rich fields of Jewish art, folklore and ethnography.
Rimonim is published by the Society for Jewish Art, which was founded in 1979 to desseminate information on and promote the appreciation of Jewish art in Israel. 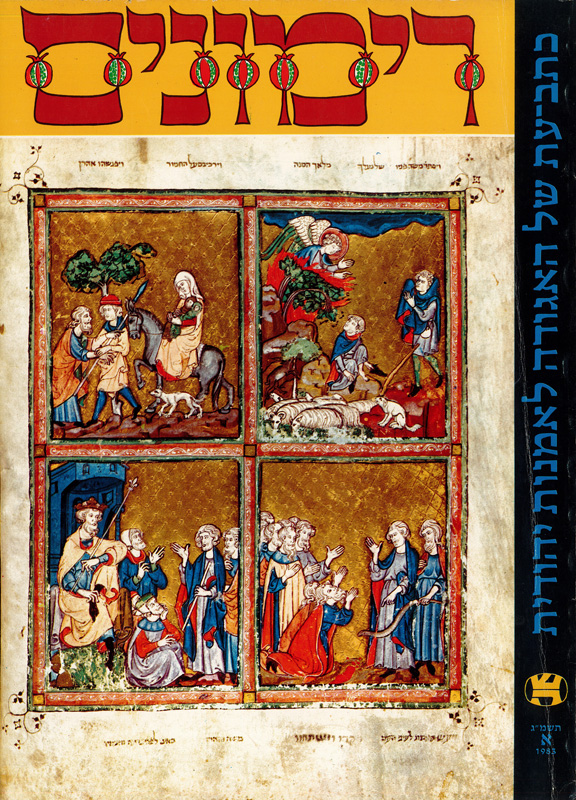 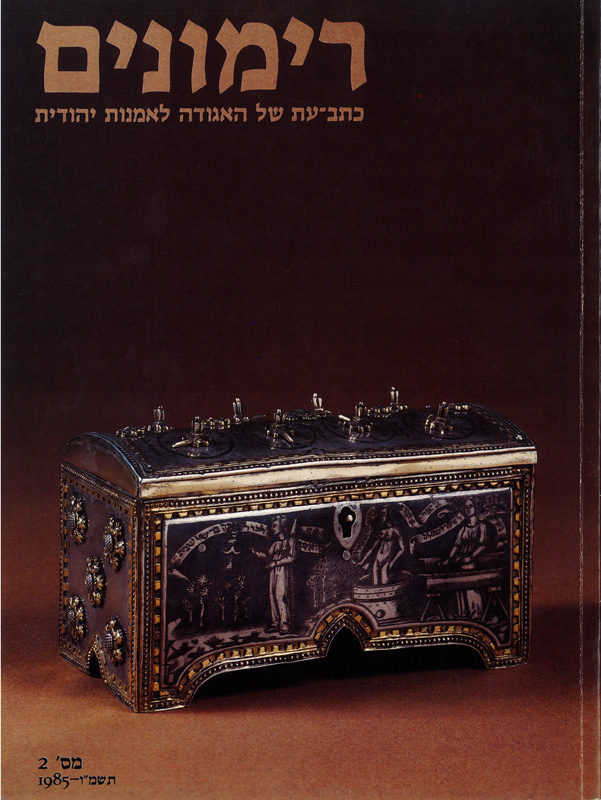 David Cassuto
The Scuola Grande Tedesca in the Venice Ghetto
Milly Heyd
Lillien and Beardsley: 'To the Pure all Things are Pure'
Avigdor W.G. Posèq
The "Binding of Isaac" in Beth Alpha and the Problem of Perspective in Ancient Jewish Art
Mordechai Narkiss
The Secret of a 15th Century Italian Niello Casket
Victor Klagsbald
An Ancient Torah Breastplate 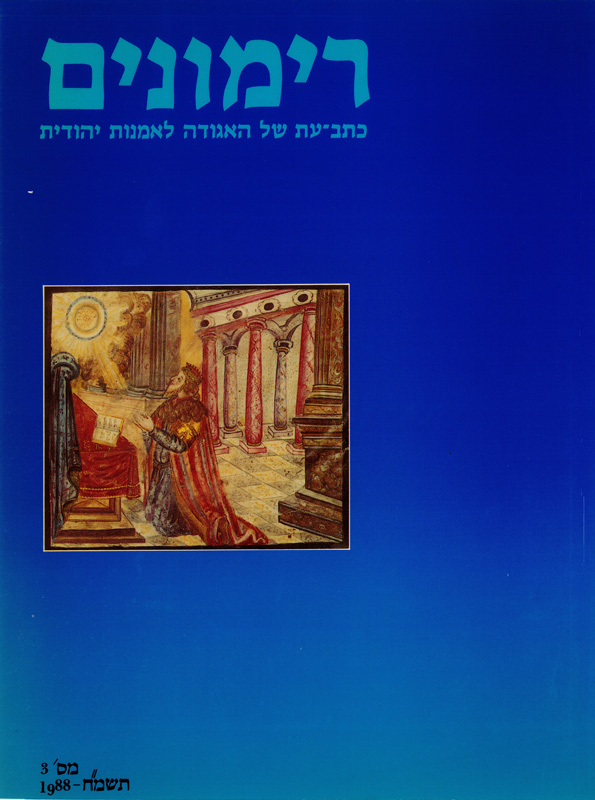 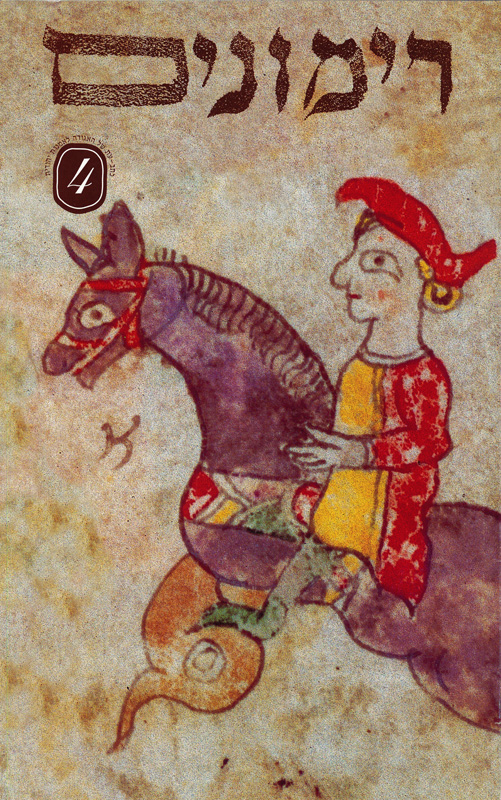 60 pages, 84 illustrations, 12 in color
This volume dedicated to Jewish culture in Spain and the Spanish Diaspora

This issue presents the wealth of Jewish culture in Spain and the Spanish Diaspora before and after the expulsion. Each article discusses the characteristic regional outlook, as well as the inspirational sources of the local artistic creations.
Spanish art was directly influenced by the customs of ancient Eretz Yisrael, from the local Muslim art of Spain and Egypt and from local Christian art. The art in the Spanish Diaspora was based on the art of the Iberian peninsula, as well as on regional sources, from Morocco, Italy, Eretz Yisrael and Surinam.

Gabrielle Sed-Rajna
"Toledo or Burgos?"
Leila Avrin
The Spanish Passover Plate in the Israel Museum - Genuine or Forgery?
Dalith Tahon
Tappuhim: Torah Finials from Morocco
Gnter Böhm
The Synagogues of Surinam
Evelyn Greenberg
Far from the Inquisition - To the End of the Jungle
Shalom Sabar
From Spain to Venice: The Exiles of Spain and the Beginning of Ketubbah Illustration in Italy
Jonathan Benjamin
"As God's Garden Flourishes" - Illustrated Ketubbot from Eretz Israel
Esther Juhasz
The Custom of Serving Sweets among the Jews of Izmir 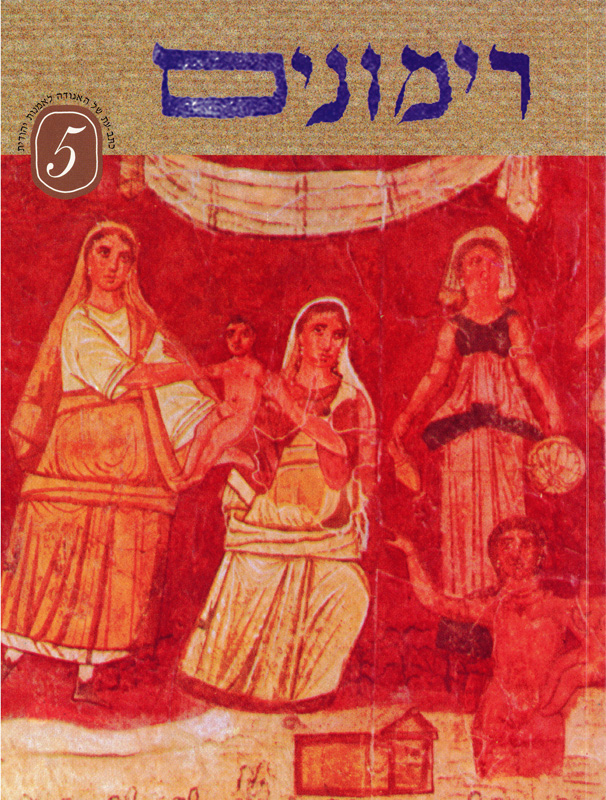 109 pages, 112 illustrations, 57 in color
Birth, Childhood and Bar Mitzvah in the Art and Tradition of Jewish Communities

Avigdor Shinan
The Birth of Moses in View of Talmudic Sources
Sarit Shalev-Eyni
The Finding of Moses and the Rebirth of Pharoah's Daughter
Hagit Matras
Amulets for Childbirth and the Child in Jerusalem Today
Zanet Battinou
Circumcision Certificates from Greece
Natalia Berger
Circumcision Implements - Between Sacred Objects and Surgical Tools
Ruth Jacoby
The Relation between the Elijah's Chair and the Sandak's (Godfather's)Chair
Yemima Leben
Customs Pertaining to the Elijah's Chair in the Jewish Communities of Southern Tunisia
Joseph Gutman
Carrying the Torah Scroll Wimple to the Synagogue - A Unique Judeo-German Custom
Aviva Muller-Lancet
The Story of a Unique Yemenite Portable Leather Cradle
Shalom Sabar
The Bar Mitzvah Ceremony in the Tradition and Art of Jewish Communities
Michael Tal
The Mar'ot Ha-Sulam Synagogue of the Old Yishuv in Neveh Tzedek
Ora Schwartz-Be'eri
Ethiopian Attire as Historical and Cultural Documentation
David Cassuto
Was the Valencia Passover Plate Made before the Expulsion from Spain?
Leila Avrin
Response to David Cassuto 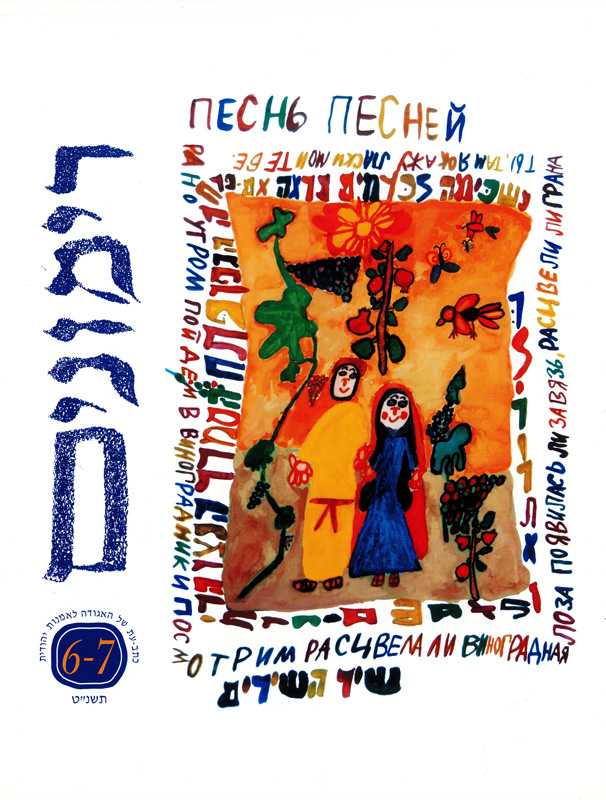 184 pages, 209 illustrations, 125 in color
The Jewish Wedding in the Art and Tradition of Jewish Communites

Sarit Shalev-Eyni
"Come with Me from Lebanon My Bride"
Shalom Sabar
A Jewish Wedding in 18th Century San`a: The Story of the Ketubbot of the Al-Sheikh families - Between Tradition and Innovation.
Rachel Arbel
Georgian Ketubbot
Postcript: Nineteenth Century
Georgian Ketubbot in Eretz Israel
David Sperber
Some Marriage Customs in Jewish Art
Mira Friedman
Chagall`s Weddings
Chaya Friedberg
Wedding Pictures in the Work of Larry Rivers
Shlomit Steinberg
Bianca Eshel-Gershuni: Waking Up from the Dream of Love
Carmella Abder
Head Adornnent of the Habanic Bride in the 1960s in Israel: A Brige Between Past and Future
Ora Schwartz-Be`eri
Symbols, Tradition and Change - Gold Jewelry of Jewish Women in Kurdistan
Gila Pollack
The "Grooms` Canopy" in Sephardic and Oriental Congregations in Jerusalem
Dana Peleg
Images of the Self in the Pre-State Caricatures of Aryeh Navon
Daisy Raccah-Djivra
The Enigma of the Italian Wedding Riddle
Shalom Sabar
Wedding Scenes on German Tora Binders
Tami Traub-Ben Shalom
"The Wedding" by Oppenheim
Tanya Pogorelskaya
Love in the Jewish Tradition in the Pictures of Children of St.Peterburg
Aviva Muller-Lancett
"Returning the Crown to its Glory" - The Rehabilitation of the Jewish Bridal Crown from San`a
Ruth Yaari
The Bride`s Candels in the Yemenite Community
Ora Schvartz-Be`eri
The Yihud Corner in Kurdistan
Ora Shvartz-Be`eri
The Bridal Dowry of the Jews of Bukhara