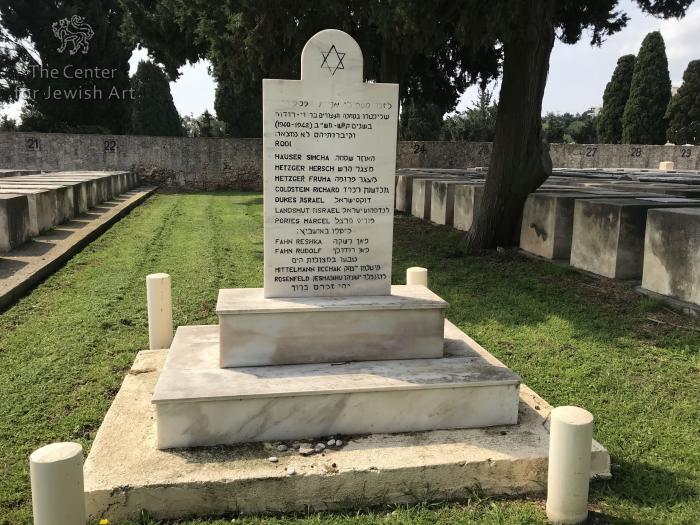 The monument is set in a grassy area to the right of the main path (as one enters the cemetery). The space corresponds to row 23 and divides two sections of tombs built to hold the human remains bought from the old cemetery, The monument is an inscribed marble stele aet on three rectangular horizontal base courses. The lowest base is concrete and built into the ground. Atop this are two horizontal levels of marble. Each course is smaller than the one below, creating a stepped base.  The very thin inscribed stele is set into the stepped base. The inscribed slab is rectangular, but the top is cut so a semi-circular (arched) section extends from the top. Within this is inscribed a simple Magen David. Below is inscribed as shot commemorative text in Hebrew followed by the names of eleven of the original ship’s passengers who did not survive the Holocaust. The names are written in Hebrew and Latin letters.

Translation: In memory of the illegal immigrants of the boat Pentcho that died in the detention camp in Rodi – Rhodes in the years 1940 – 1942. Their burial site could not be found.

Translation: Drowned in the depth of the sea

Translation: Their memory will be blessed 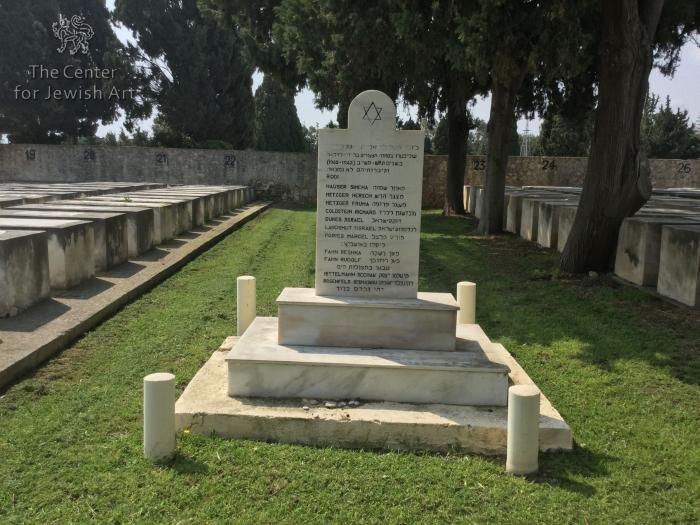 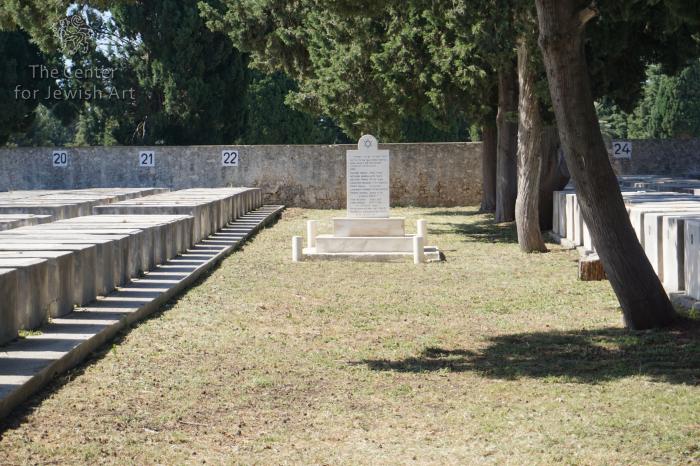 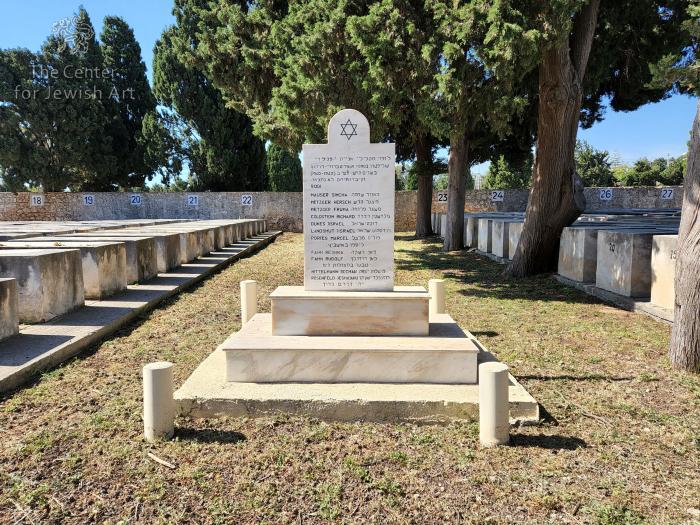 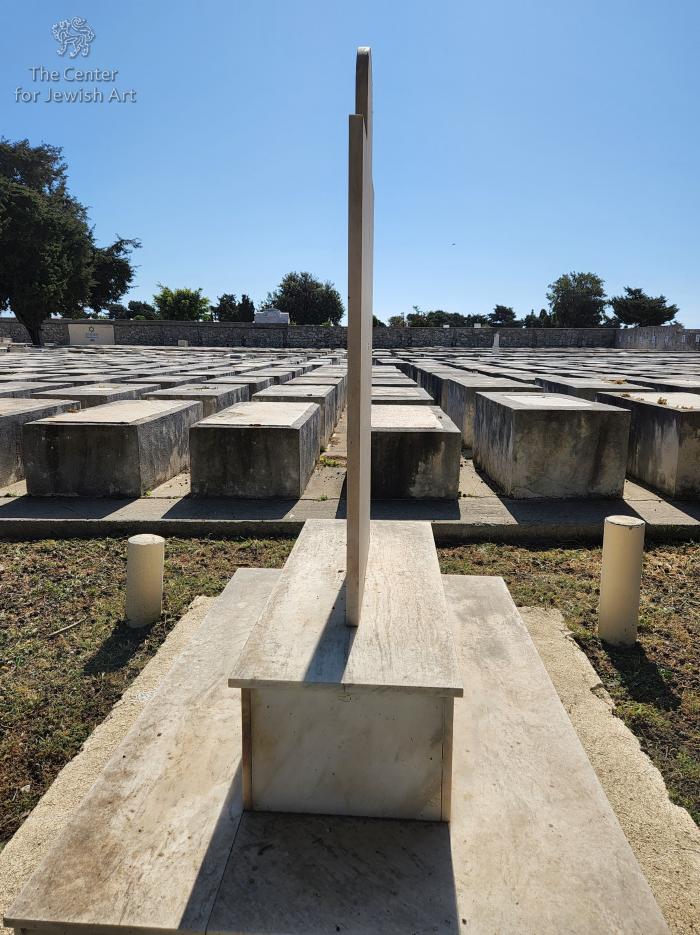 The memorial is for those passengers of the riverboat La Pencha who died on Rhodes while fleeing Nazi-Europe on board “The Pentcho” en route to Palestine (1940-1942), and for the four individuals who remained on Rhodes until deported by the Germans to their death along with the rest of the Rhodian community.

“The Pentcho was an 85 year-old paddlewheel steamer hired by the Revisionist Zionist movement to bring Jewish refugees to Palestine. It departed from Bratislava on May 18, 1940 with some 400 Slovakian Jews and proceeded down the Danube. A few weeks later it picked up over 100 Austrian Jews at the seaport of Sulina, bringing the total to some 510 Jewish refugees.

The Pentcho left Sulina on September 21 and after a stormy crossing on the Black Sea, it passed the Dardanelles and reached the Greek port of Mytilene (Metelin) on the island of Lesbos. After the ship was ordered to leave without refueling, the passengers wired the Committee for the Relief of Refugees (CRR) in Athens stating their predicament. They headed for the port of Piraeus, where the CRR arranged for a delivery of food and fuel. The Pentcho left Piraeus on October 3 and four days later reached the port of Rhodes where they were provisioned by the Italian authorities but ordered to leave the following day.

A few days later, on October 9, the ship's boiler exploded, and the ship broke in two
off of the deserted island of Kamilonissi in Dodecanese territory, then under Italian control. The passengers and crew were able to get ashore and off-load their supplies before the ship finally sank. Five men took the ship's only lifeboat to look for rescue. Though they were caught in a storm and lost their bearings, they were eventually rescued by a British destroyer and taken to Alexandria.

When the CRR learned about the wreckage of the Pentcho, it alerted Greeks in Herakleion who then endeavored to have supplies delivered to the stranded refugees on Kamilonissi. On October 18 and 19, Italian authorities picked up refugees on two sorties and brought them to the main island of Rhodes where they stayed for the next year and a quarter in a hastily constructed camp in the soccer stadium of Rhodes. On December 25th they moved them to San Giovanni Camp in Rhodes. They lived comparatively well with the help of the old Sephardic Community. Living conditions in Italian occupied Rhodes were difficult, food was scarce, deceases raged.

In January 1942, the refugees were transferred to the Ferramonti internment camp in southern Italy. They were kept there until the Allies captured Italy. Most of the Pentcho's passengers arrived in Palestine in June 1944, but twenty- four of them were among the 1000 refugees brought to the US in 1944 aboard the SS Henry Gibbins and sheltered at Fort Ontario. The Pentcho was the last illegal immigrant ship sponsored by the Revisionist Zionist movement. Afterwards illegal immigration to Palestine was organized by the Mossad, the Organization for Illegal Immigration”

[“Jewish Cemetery of Rhodes – A memorial dedicated to the illegal Jewish immigrants who died in Rhodes while fleeing Nazi-Europe on board “The Pentcho” en route to Palestine (1940-1942),” Jewish Community of Rhodes, https://jewishrhodes.org/wp-content/uploads/2020/04/pencho1.pdf]

"Jewish Cemetery of Rhodes – A memorial dedicated to the illegal
Jewish immigrants who died in Rhodes while fleeing Nazi-Europe on
board “The Pentcho” en route to Palestine (1940-1942)," Jewish Community of Rhodes, https://jewishrhodes.org/wp-content/uploads/2020/04/pencho1.pdf (accessed November 27, 2022)