Jewish Victims of the Holocaust

A matzevah (gravestone) type monument of polished gray granite is set upright on two stone slabs, laid horizontally, which serve as a base to the upright stele. These stones a laid to create narrow ledges or steps on which visitors leave memorial pebbles. The monument is in a narrow, landscaped area outside of Temple Beth Shalom of Boca, facing a paved walking path and roadway on the western edge of Century Village.

The top of the monument is cut in the shape of an off-kilter Magen David with the word ZACHOR in Hebrew inscribed within it. On the front of the monument, near the base, is an inscribed map of Europe showing the location of major killing sites and includes a short dedicatory inscription, "In Sacred Memory of 6,000,000."

On the exterior wall of the synagogue behind the monument is a metal (copper?) plaque cut in the shape of the monument. Like the monument, it has the word ZACHOR in Hebrew set within an off-kilter Magen David. Beneath is written in raised letters “The Holocaust Memorial Garden, Dedicated 5760 – 2000”.

Around the corner (to the north) of the synagogue is a driveway through a porte cochère, emblazoned with the synagogue name “Temple Beth Shalom”. On a low wall on the side of the covered porte cochère is affixed a small bronze plaque inscribed “In Sacred Memory of the Six Million Jews Who Perished in the Holocaust.” This suggests that the erection of the entire synagogue is dedicated to the memory of victims of the Holocaust.

Inscription in Hebrew inside Magen David:

Inscription in English between the Magen David and the map reads:

Inscription on wall plaque near monument 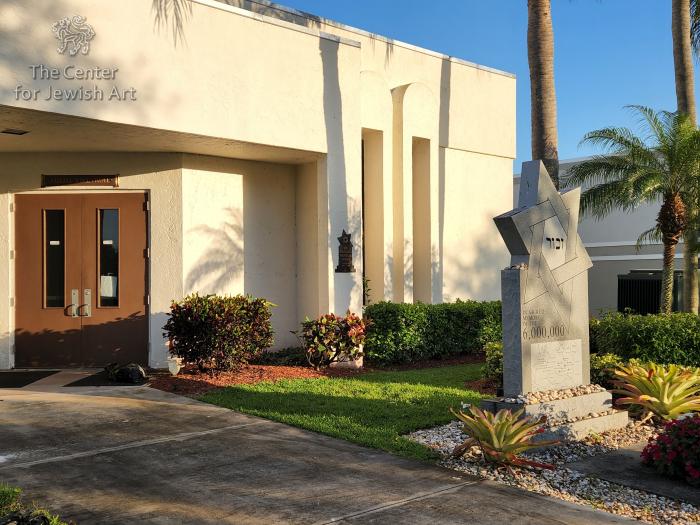 Century Village in Boca Raton is one of four Century Village locations built by Cenvill Development headed by Florida real estate developer H. Irwin Levy. These are large, gated communities for residents over 55 years old, and they were marketed as retirement communities attractive to Jew from the Northeast United States. Several synagogues were built in or near the communities. Beginning in the 1980s, many Holocaust survivors lived in Century Village. All the synagogues in the area appear to have prominent Holocaust memorial monuments.