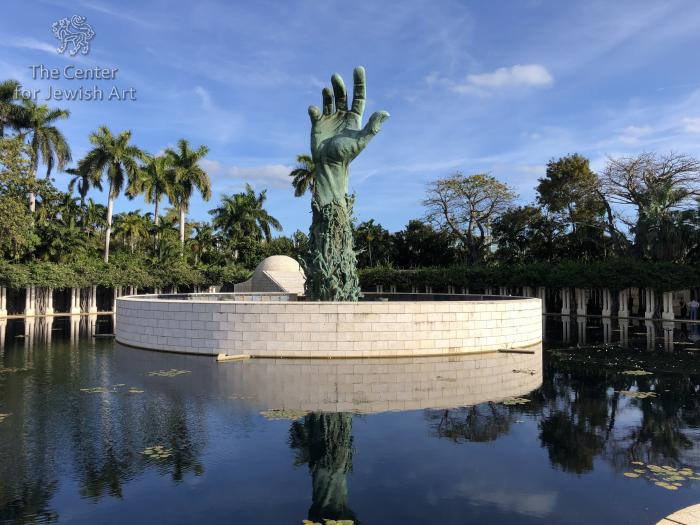 Survivors in the Miami area

The memorial is a large environmental sculpture consisting of a “series of outdoor spaces in which the visitor is led through a procession of visual, historical, and emotional experiences with the hope that the totality of the visit will express, in some small way, the reality of the Holocaust.” [About the Sculptor in Holocaust Memorial Miami Brach website].

This includes structures and walkways and culminates in a colossal bronze statue of a human arm rising from a pool of water. 130 bronze figures cling to the more than four-story-high arm or are situated around the sculpture base. Treister added shades of blue, green, brown, gold and orange to the figures so that each one is distinctive.

Treister has described the route the visitor takes through the memorial and the impressions and emotions he has tried to evoke. [Kenneth and Regos, 2015]:

The first sculpture is of a mother and two nestling children fearful as the signs of the Holocaust first appear. Their faces ask, "Can it happen? Will God forsake us?" The sculpture is framed by Anne Frank's words "In spite of everything I still believe that people are really good at heart.”

The procession continues into an area enclosed by a dome and semicircular wall with an eternal memorial flame and inscription from the Twenty-third Psalm. Piercing the dark interior of the dome is a shaft of yellow light projected from a central yellow Star of David with the black letters "Jude," the patch of ignominy.

The next space is a dark and lonely stone tunnel illuminated by thin slats of sunlight, the haunting voices of Israeli children singing songs from the Holocaust with the solemn memory of the camps carved into its walls. A crying child is seen in the distance ... the cries growing louder the farther you walk. A juxtaposition of spaces is created so that as one emerges from the dark repressive tunnel and enters into the sculpture's plaza the visitor experiences a burst of sunlight and a soaring space crowned only by the sky above.

Sculpture of Love and Anguish

This is my portrayal of the Holocaust, frozen in patinated bronze. A giant outstretched arm, tattooed with a number from Auschwitz, rises from the earth.

A Series of Bronze Vignettes

Tormented figures precariously cling to the skin trying to escape. The entire scene is a series of vignettes where families try to help each other in a final act of love. Caught in the abyss, fathers help mothers, mothers gather children, children comfort babies all expressed the mixed emotions of terror and compassion. The freestanding figures surrounding the Bates are life sized so that the viewer becomes part of the sculpture, able to touch and sense both the love and the fear

The next path in the journey is a silent one, a walk past black granite panels etched with the names of countless martyred victims submitted by their loved ones.

The journey ends. The final sculpture depicts the same mother and two children who started the journey, now dead, framed by the words of Anne Frank: ideals, “dreams and cherished hopes rise within us only to meet the horrible truths and be shattered.”

Many references to the history of art and the Holocaust can be found in the memorial design. Though the artist’s intent was to provoke specific reactions, viewers experience the memorial in many ways depending on their pasts, previous knowledge, and expectations.

Treister said the giant arm represents a “scene from hell, frozen in bronze. the final reaching out of a dying person.” The arm coming out of the water recalls Auschwitz survivor Primo Levi’s description of the unpredictable circumstances that separated the “drowned and the saved.” Art critics have had mixed reactions to the memorial, but it was immediately popular among the large population of Holocaust survivors in the Miami area, and in the decades since its opening it has proved to be one of the most popular Holocaust remembrance sites. This is in part due to the immersive experience of the viewer, but also because the memorial offers so many opportunities for dramatic photos.

The memorial is more than just the physical site, architecture, art, accompanying text. Since its dedication in 1990, the memorial has operated as a Holocaust education center with outreach in schools, in the community, and online to a wide public.

Inscribed on the walls of Jerusalem stone:

“...Then in spite of everything. I still believe that people are really good at heart”. ...Anne Frank”

The "final sculpture depicting a deed mother and two children is accompanied by the words by Anne Frank:

“Ideals, dreams and cherished hopes rise within us only to
meet the horrible truths and be shattered". ...Anne Frank

“Yea, though I walk through the valley of the shadow
of death. I will fear no evil for thou art with me”
...XXIII Psalm 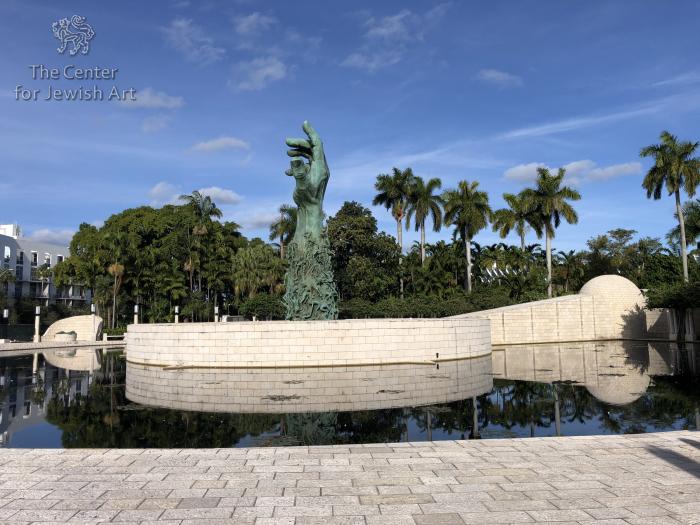 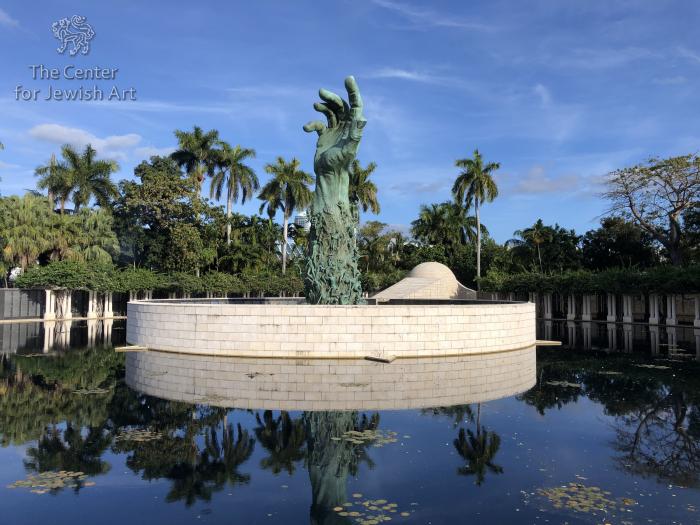 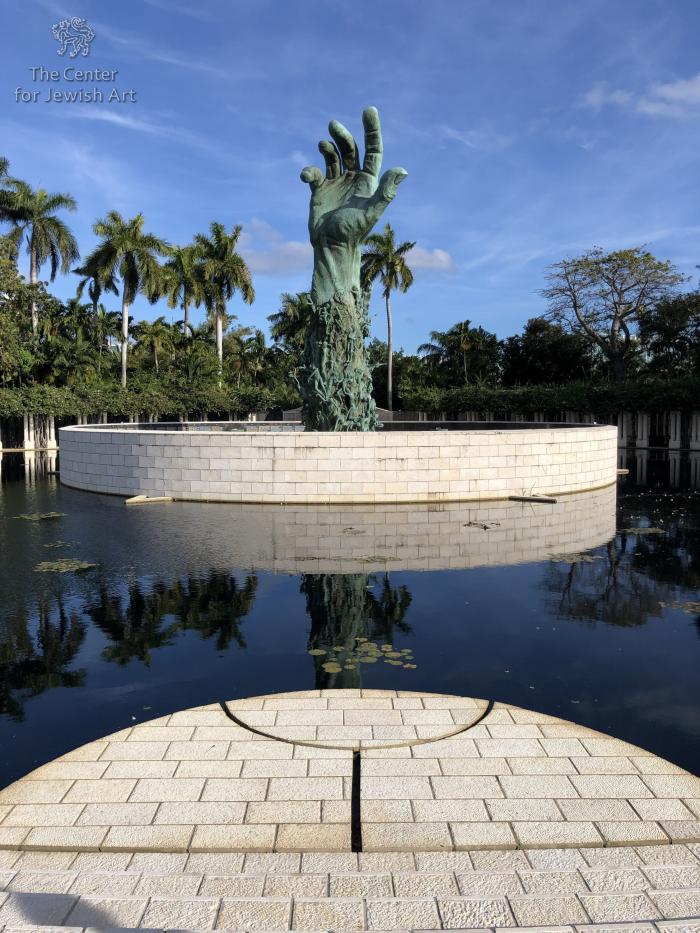 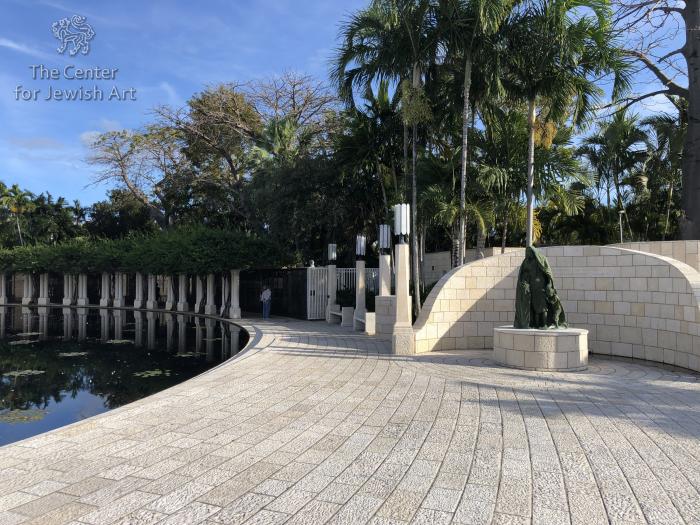 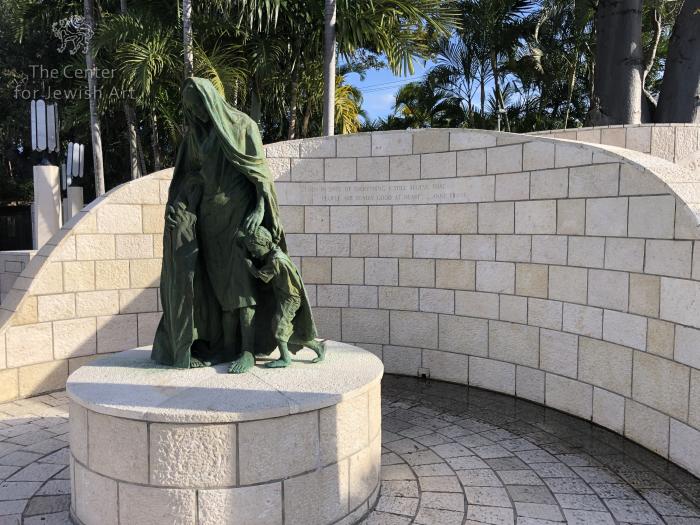 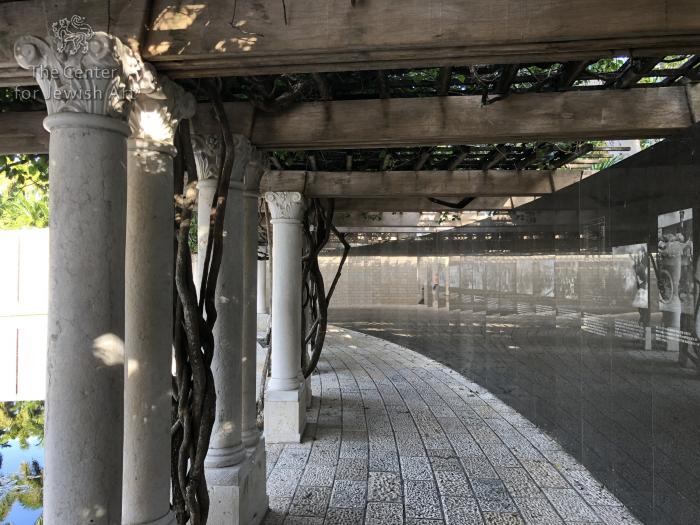 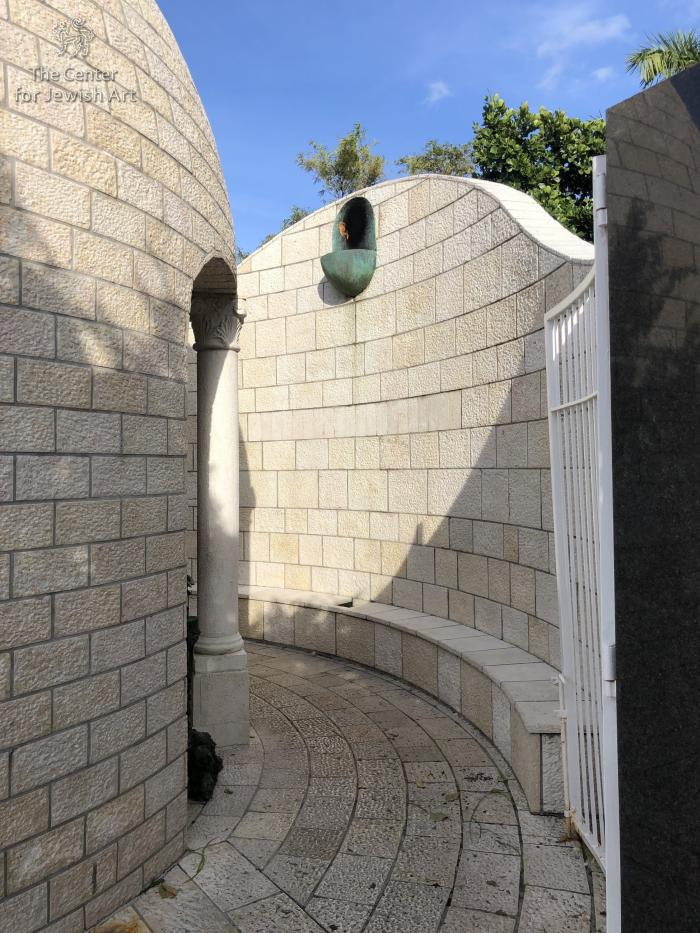 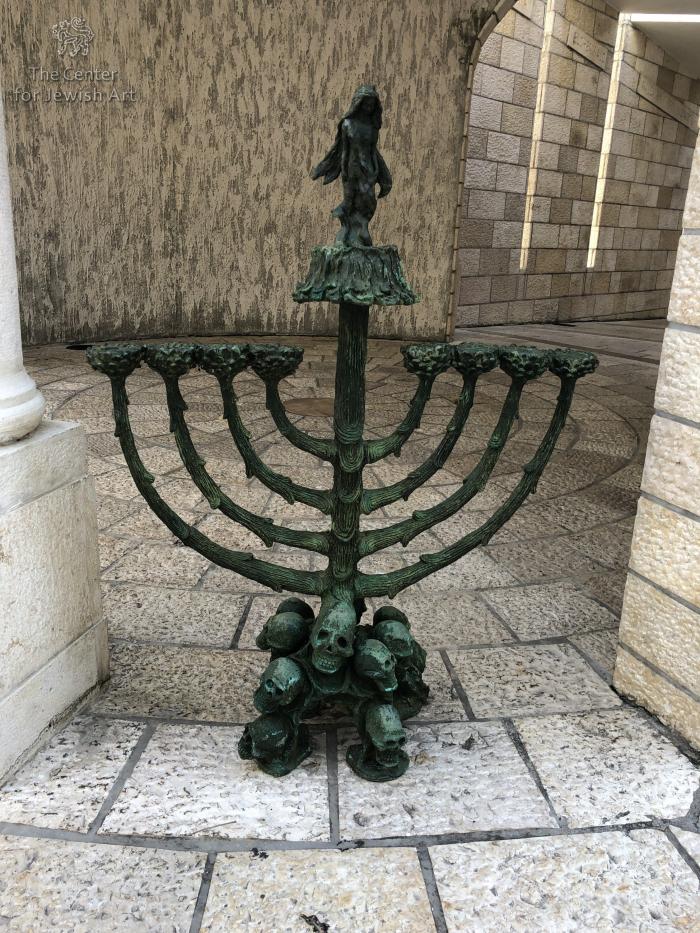 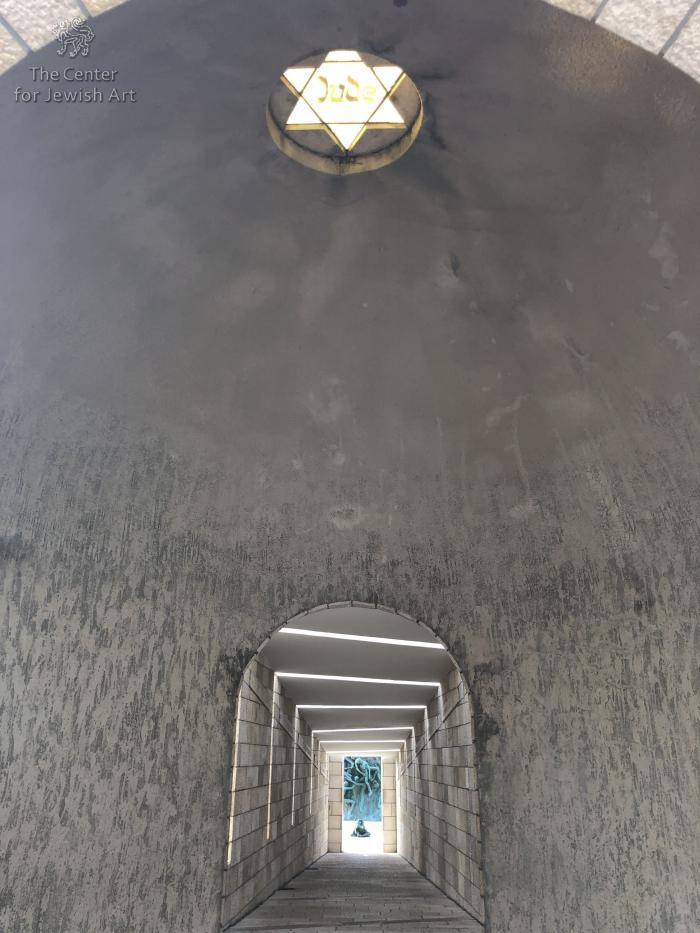 In the lower part of the half-round wall:

A few small Holocaust memorials were erected by survivors in Miami Beach in the 1960s, but in 1984 a group of Holocaust survivors joined together to develop plans for a more prominent and permanent memorial in Miami to the victims of the Holocaust. At the time there were more than 20,000 survivors living in the region. The group moved quickly and chose a site at Meridian Avenue and Dade Boulevard that was previously the home of the Loeb family, Holocaust survivors who immigrated from Rotterdam, the Netherlands after the occupation by the Nazis.

The local Miami Beach community was divided over the creation of such a large monument on the site. After several often-contentious public meetings and hearings, however, the Planning Board and City Commission approved the monument location.

The Holocaust Memorial Committee was formally established in 1985 as a private non-profit organization to organize the memorial and raise funds and soon formally hired Florida-based designer and sculptor Kenneth Treister for the project. Treister worked for five years to bring it to fruition assisted by a team of architects, artists, and artisans.

Treister produced the initial 17-feet-high clay model of the arms and connected figures in about a year. The entire arm was then constructed in five giant, interlocking, slices that were cast and finished in Mexico, and then transported to Miami Beach where sixteen craftsmen from the foundry spent two months assembling the pieces.

After several years of planning and more than four years of design and construction, the memorial was dedicated on Sunday, February 4, 1990. Nobel Peace Prize Laureate Elie Wiesel was the guest speaker.

About the work Treister reflects that “No one can comprehend the number of six million or the fact that each of the six million was a person, with family, friends, and a full life... each enduring the most excruciating agony every second, minute, hour, and day, of the Holocaust. The immensity of this tragedy is infinite. To express it artistically, impossible ... but I had to try.”

Treister, Kenneth with Laszlo Regos. The Fusion of Architecture and Art: The Judaic World of Kenneth Treister (Coral Gables, FL: Books and Books Press, 2015).
Type
The following information on this monument will be completed:
Measurements
Language editing
Copy-editing
|