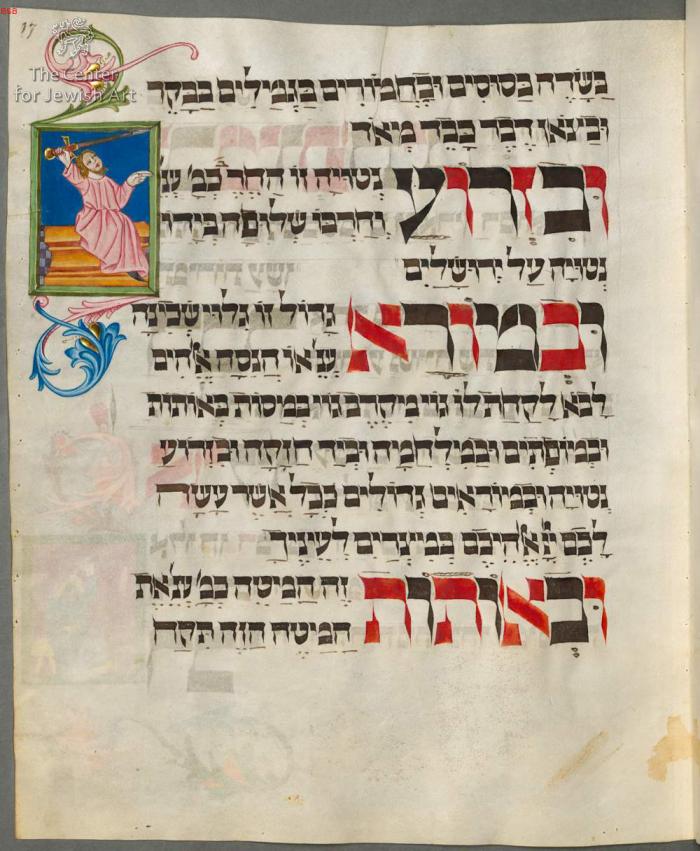 Fol. 17: In the upper outer margin, a green-framed panel depicts a bearded man brandishing a sword in his right hand above his head, illustrating the text next to it: "…having a drawn sword in his hand stretched out over Jerusalem" (I Chron. 21:16). The bearded man, in a magenta tunic, is seated in a room, his left hand pointing with two fingers and thumb joined in the gesture of Christian blessing (Shalev-Eyni, forthcoming facsimile).

Two branches of fleshy magenta, green and blue acanthus leaves extend from the corners of the panel.

Fig. 5: This is the mighty hand

The illustration of the sword stretched out overJerusalemalludes to the mighty hand of the Lord and appears in haggadot of the 15thcentury. In the Second Darmstadt Haggadah, for example, it shows an arm and hand holding a sword appearing from the sky, identified by an inscription as "his outstretched sword" (fig. 2). The sword is stretched out over a walled city representingJerusalem. A similar depiction is in the Murphy Haggadah attributed to the scribe and artist Joel ben Simeon (fig. 3). In our manuscript it is a man seated on a bench who holds the sword, whereas in the Ruzhin manuscript of c.1460, an armoured man is drawing it, both illustrating the same text and expressing a similar interpretation of the "hand of the Lord".

On the other hand, interpretations of the mighty hand of the Lord cited by R. Yosei in the Yahudah Haggadah and R. Eliezer in the Second Nuremberg Haggadah, both from south Germany (figs. 5, 6), are each illustrated by a winged angel.

The iconography of the human figure alluding to the mighty hand of God in our haggadah and the Ruzhin Siddur is exceptional. It could be argued that the figure is a Christian representation of God. However, since it has no halo and is not emerging from the sky, it seems that the artists or patrons wanted to tone down any Christian connotation. Instead, the figure of a man drawing a sword could allude to the biblical text (I Chronicles 21:16) partly quoted in the haggadah: "the angel of the Lord stands between the earth and the heaven, having a drawn sword in his hand stretched out overJerusalem" and sent by the Lord to destroy the city. The gesture of blessing probably suggests that the Lord is reversing his order for destruction, and the figure of the man could represent a wingless angel or be just a literal illustration of a "drawn sword".

A parallel example of a figure of a man replacing the representation of God is found in the 14th-century Sarajevo Haggadah from Barcelona (?). There, the seventh day of creation, which in Latin Bibles is commonly illustrated by a seated, nimbed God, has a seated Jew resting on the Sabbath (Narkiss 1969, p. 60; Saltman 1981, pp. 42-53).