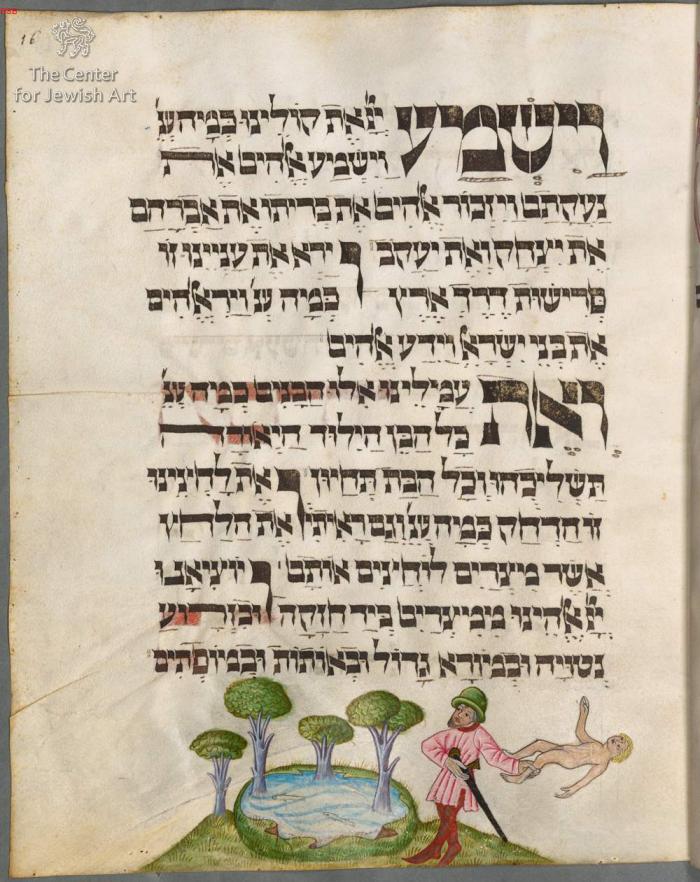 Fol. 16: An unframed text illustration appears in the lower margin of the page, below the text in the Haggadah commenting on the biblical phrase "our labour" (Deut. 26:7): "these are the sons, as it is said, 'Every boy that is born you shall throw into theNile' …" (Exod. 1:22). In the illustration an armed Egyptian is holding a naked blond boy by the leg about to throw him into a round lake surrounded by a meadow with trees. The bearded Egyptian prepares to draw the black sword at his waist with his right hand. He wears a short magenta tunic with red hose and a green hat.

Fig. 1: Infant cast into the water

Fig. 2: Infants cast into the water

Fig. 3: Infant cast into the river

Fig. 4: Infant cast into the river

Fig. 5: Infants cast into the river

Fig. 6: Infants cast into the river

The scene in the Tegernsee Haggadah also appears in the North Italian Murphy Haggadah of c.1455 and consists just of the main components: an Egyptian casting a child into the water (figs. 1, 2). A similar iconography appears in the Maraviglia Siddur of 1469, which, like the Murphy Haggadah, was illustrated by Joel ben Simeon in North Italy, although theNileis shown as a river rather than as a round lake (fig. 3). In the First Cincinnati Haggadah the casting of the infant is similar (fig. 4), though in the presence of Pharaoh and an attendant. In other haggadot the iconography of this scene may include a group of Hebrew women mourning their children, situated within a landscape with the gushing waters of a river (figs. 5, 6).