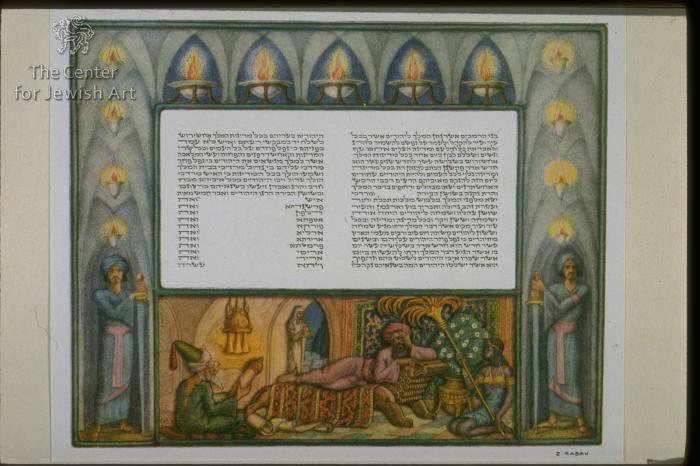 The picture below the centered text (Esther 8:10-9:10) illustrates Esther 6:1. The other sides of the frame depict a vaulted corridor with a guard on each side. The picture below the text illustrates Esther 6:1: "On that night could not the king sleep, and he commanded to bring the book of records of the chronicles; and they were read before the king". The picture depicts Ahasuerus in his room, lying in his bed in a purple robe. he is leaning his head against his arm and seems to be bothered. An old man is sitting cross legged on the floor, reading the king from a scroll. The old white-bearded man is wearing a green robe and a green-white miter. A black maid on the left is holding a long fan next to Ahasuerus' head. In the background there is a wall carpet/a painted wall. A guard with a long sword is standing at the entrance. The top frame depicts five burning oil lamps in tripods, with a crossed arch above. On both sides of the frame 4 oil lamps are hanging from the cross barrel vaults of the ceiling. A guard is standing, in a blue robe and a pink girdle, holding in his hands a long sword, which is leaned against the floor.