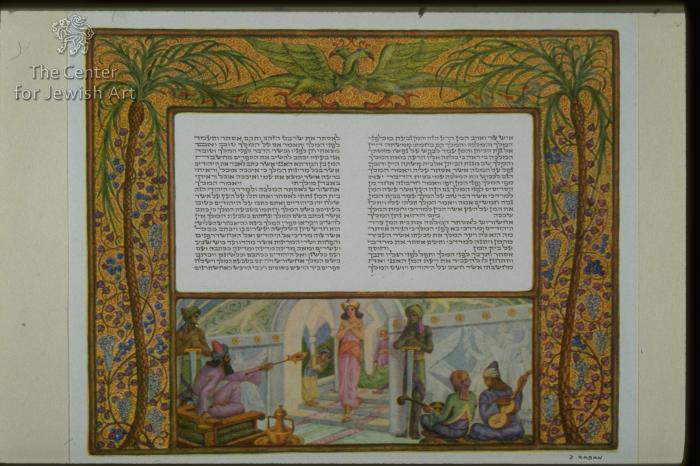 The picture below the centered text (Esther 7:6-10:11) illustrates Esther 5:2. The frame on the other sides of the frame represents palm trees and swans. The picture below the text illustrates Esther 5:2: "...And the king held out to Esther the golden scepter that was in his hand". Esther is represented walking into the palace, crossing a corridor that leads to the room where Ahasuerus is sitting. She is wearing a pink dress with a red girdle (?) and a green train, carried by a servant. Ahasuerus is turning the scepter towards Esther. He is seen from the back, and has 2 sward-carrying, black servants. On the right background 2 men are sitting on the floor, playing an oudh. The top frame depicts above the text a couple of greenish birds, with interwoven necks standing opposite each other. The yellow background of the whole frame has a red spiral decoration. On both sides of the frame a blue purple vegetation intertwines around palm trees.