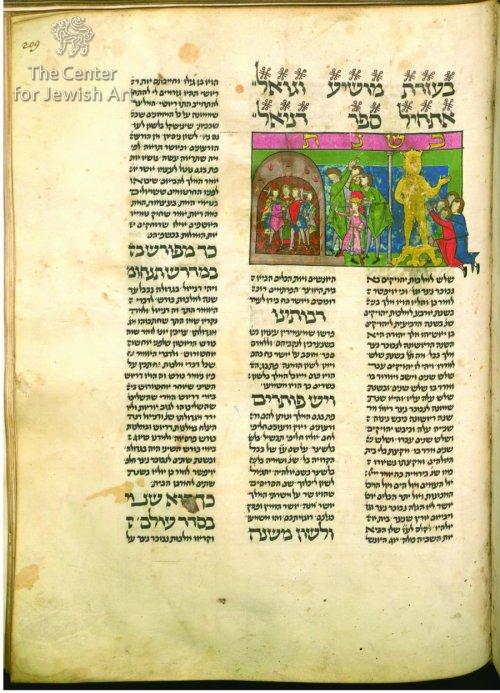 Vol. II, fol. 209: The initial word Bishnat (בשנת, In the third year) of the Book of Daniel is inscribed above the illustrated panel in gold leaf on a magenta ground, set across two text column.

The panel represents Hananiah, Mishael and Azariah (Dan. 1:6; Shadrach, Meshach and Abednego, Dan. 3:12) and their dispute with king Nebuchadnezzar, on a deep blue and green ground, illustrating the biblical text (Dan. 3:1-30) and the commentary (II:210v, 3rd column-211v).

The first scene on the right shows a large crowned golden idol on a three-legged pedestal (Dan. 3:1-7) being worshipped by four kneeling men with joined hands raised in adoration. They are wearing red, blue and green tunics, and their legs extend beyond the frame. This scene is separated from the next by a thin gold column. The second scene is a conflation of two episodes: in the centre, the small figure of King Nebuchadnezzar, crowned, with his four mighty soldiers, ordering them to heat the furnace seven times more than usual (Dan. 3:19). However, having thrown the three bound youths Hananya, Mishael and Azarya into the fiery furnace, the brave soldiers were themselves consumed by the flames (Dan. 3:22; commentary II:211v, 2nd column). The flames attack in partucular the tall soldier near the furnace, who turns to stab one of the youths with his lance. Another, with a sword in his left hand, raises his right to his head in astonishment, for within the vaulted fiery furnace four men, not three, are walking freely amid the flames (Dan. 3:24-25); and between two youths stands a large figure with his arms round their shoulders, the angel Gabriel (Dan. 3:28; commentary II:211v, 1st column).

The king wears a long magenta tunic with a green, ermine-lined robe. He holds a fleur-de-lis sceptre in his left hand, while his right is raised in command. His soldiers wear short tunics of green, red and white (turned grey).

The three youths wear short magenta, blue and green tunics, and two have red and blue chlamydes with pointed Jewish hats in white (turned silvery) hanging round their necks. The angel wears a long green tunic with a red collar and hem. The brown furnace in which they stand is belching with flames.

Inscriptions in faded plummet in Latin by the 13th-century hand, and by a later hand in Hebrew display script:

The figure of the king in our manuscript (fig. 1) is shorter than that of his servants and other protagonists, and contrasts with the large dimensions of the statue which has a similar crown. Metzger (1974, p. 548, n. 44) wonders if this depiction may be linked to the midrashic account that Nebuchadnezzar had a dwarfish figure (Ginsberg 1909-1911, VI, p. 422, n. 96), but opts for an ‘inverted perspective’ by the artist.

According to Narkiss (1985, p. 430, n. 31), the midrash describes Nebuchadnezzar as a dwarf or a baby. A diminutive crowned figure of Nebuchadnezzar is illustrated in three south German Hebrew manuscripts: two show Nebuchadnezzar riding a lion with a snake as bridle (Jer. 27:6; BT Shabbat, 150a); in the Kalonimos Bible of 1237/8 (fig. 2) the king is dressed, pointing towards the turreted city ofJerusalem(II Kings 24:10), whereas in the later Mahzor Lipsiae of c.1320 (fig. 3) he is depicted as a crowned but naked

In the third manuscript, the 13th-century Minute Mahzor fromFranconia, the short figure of Nebuchadnezzar is seated on a throne next to a gigantic bodyguard (fig. 4, top right). In this case the artist was inspired by the attached piyyut, in which Nebuchadnezzar is called "the dwarf" (Aramaic: ננסא; Narkiss 1985, p. 430).

The scenes in our Rashi's commentary (Dan. 3; fig. 1) appear in the same sequence as in the Saint-Séver Beatus of the mid-11th century fromGascony(fig. 6). A similar illustration is found in the Morgan Las Huelgas Apocalypse of 1220 (fig. 7).

These Beatus manuscripts show the Babylonians at the top adoring the idol, and the king below ordering the three youths to be burned. The protective angel stands behind the boys in the fiery furnace.

The single episode of the three youths in the fiery furnace is quite common in Christian art and is already found in the catacombs (Guttmann 1978, p. 73), e.g. that of Priscilla catacomb (fig. 8), though without an angel.

Gabriel is found in Byzantine depictions, for example the 6th-century wall painting in the Coptic monastery at Wadi Sarga inEgypt(figs. 9a, b); in the mosaic of the monasterychurchofHosios Lukasof the 11th century (fig. 10); and in 13th-century depictions in Armenian manuscripts (fig. 11) and wall paintings inCappadocia(e.g. Göreme Karanlık Kilise).

In the Byzantine examples as well as in the Beatus codices the angel hovers above the three youths with wings and hands outstretched, while in our illustration (fig. 12) the angel stands behind them, his arms round their shoulders. An interesting parallel is found in the Cîteaux Bible, where a large figure engulfs the smaller youths from behind. However, it is not the angel Gabriel but a bearded Christ come to save them (fig. 13).

Another interesting resemblance is the figure stoking the furnace on the right, which is comparable to the large figure next to the furnace, one of the four brave soldiers in our illustration. The flames att