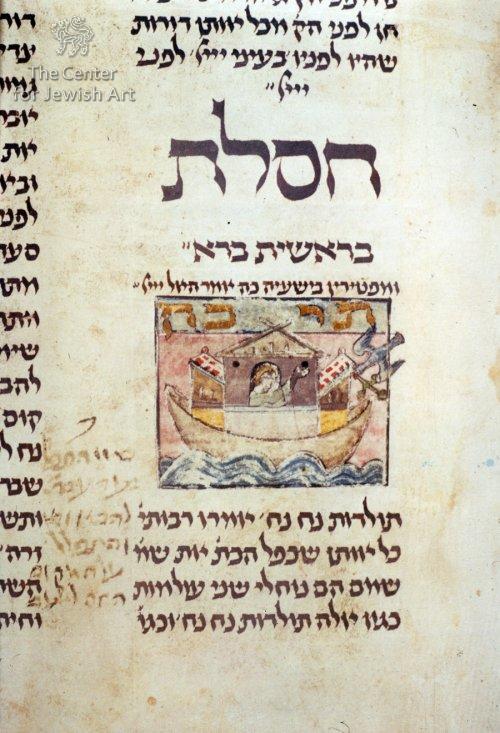 Vol. I, fol. 6: The word Tevah (תיבה, ark) is written above the illustration to Parashat Noah (Gen. 6:9 – 11:32) in gold leaf on a greenish-blue ground, set below the explicit (חסלת בראשית ברא) and its haftarah (ומפטירין בישעיה כה אמר האל ה').

The panel depicts Noah in the ark receiving the dove, illustrating the commentary (I:7v) of the biblical text (Gen. 8: 10-11).

The ark, floating on blue waves, consists of a central structure flanked by wings, the whole placed on a boat. Slit openings pierce the three sectiones, and two round windows flank the larger central opening in which Noah appears, stretching his hand out towards a blue dove with an olive branch in its beak. He is wearing a pale green tunic and has yellow hair.

The diagonal cornice of the ark's pediment divides the word תיבה into two syllables. This suggests that the word was written by the main scribe after the drawing was done, but before it was coloured, since the blue wing of the dove overlaps the gold letter ת. The shapes of the individual letters are similar to those of the main scribe, although the laying of the gold has caused some distortion of the last letter ה.