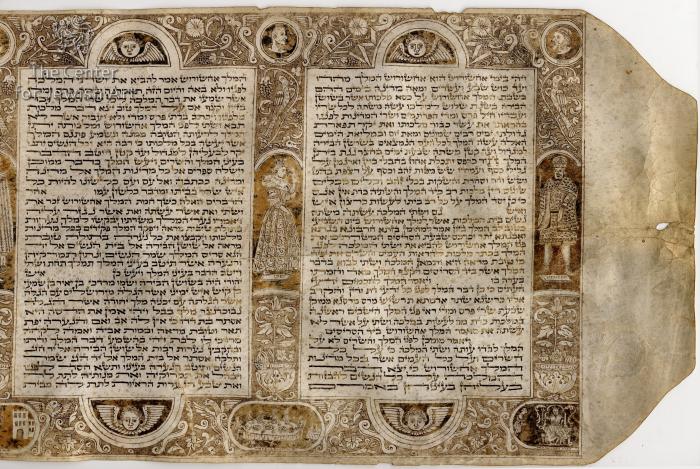 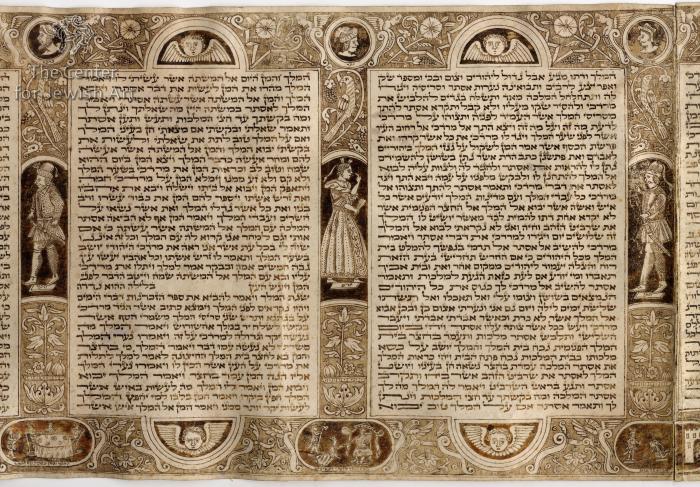 This lavishly decorated scroll is not signed but its ornamentation resembles the style of the megillot Esther executed by the scribe-artist Aryeh Leib son of Daniel of Goray (Pol. Goraj), Poland. The right edge of the first membrane is trimmed. The upper margins adorn angel’s heads framed in semicircles placed at the center of each text panel. They are flanked by flowers and bunches of grapes. Every section is alternated with medallions containing the busts of the minor characters of the Esther story who are identified by their names written in a semi-cursive Hebrew script; they are Mehuman, Bizetha, Harbonah, Bighta, Abaghta, Zethar, Carcas, Bightan, Teresh, Hatakh, Hegai, Shaashgaz, and Memucan. The roundels are flanked by architectonic elements with winged busts. The text is inscribed in the rectangular panels interspersed by full-length figures of the main characters of the Esther story that appear in the niches; they are Ahasuerus, Vashti, Mordecai, Esther, Haman, Zeresh, Hatakh, Carshena Shethar, Admatha, Tarshish, Meres, and Marsena. Also, these figures are identified by their names inscribed in the same type of Hebrew script as above. The spaces above them are adorned with birds sitting on twigs while below them there are decorative urns with plants and fruits. The lower margins embellish heads of angels framed in semicircles, the same as in the upper margins and they alternate with ovals containing narrative scenes reflecting the Purim story placed; the illustrations are placed below the vases. They are flanked by architectonic elements with birds and flowers (possibly daffodils) and are also captioned in semi-cursive Hebrew script. The background behind them is covered with a repeating composition including birds. Additionally, the hand-drawn imitation of the cross-hatching fills the background of all decorated spaces. The narrative cycle of this scroll includes an additional depiction incorporated into the 10th text column. The left margin of the last membrane is trimmed into a semicircle.