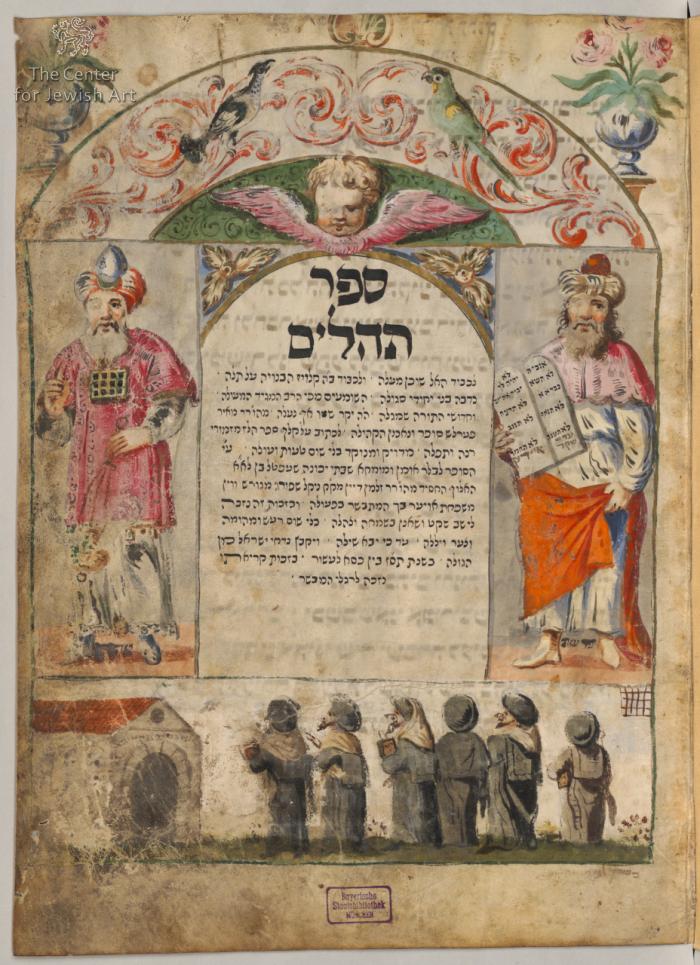 The manuscript contains the complete book of Psalms divided into sections for daily readings. According to the rhymed colophon written on the richly illuminated title page (fol. 1), the book was copied by the scribe Shabetai (Scheftel) son of Zalman the dayyan of Nikolsburg (today Mikulov, south-eastMoravia) of the branch of the Auerbach family expelled from Vienna in 1669-1670. It was donated to the Klausen Synagogue by the members of the Klausen Synagogue in Prague, followers of Rabbi Meir Perles (Moses Meir ben Eleazar Perles, 1666-1739; EJ "Perles", 15:777). The book was completed between New Year and the Day of Atonement in September 1706.

Two more manuscripts, both decorated, are known from the hand of the scribe Shabetai (Scheftel): one is a collection of liturgical poems for the morning service (Yozrot) for the whole year, copied in Prague for the Meisl Synagogue in 1719 (fig. 1; Sadek 1969, p. 149; Altshuler 1983, cat. No. 255); and the second is a collection of memorial services, litanies and prayers (Seder Hazkarot Neshamot, Tehinot and Tefillot) dated 1731, his last known manuscript. This book is dedicated to the memory of the scribe's family (fig. 2): the father, Meshullam Zalman ben Zeev Fischof Auerbach, the dayyan of Nikolsburg (Róth 1974-1975, p. 152; Kaufmann 1889, p. 174) who was "the grandson of Baer Eilenburg, Rabbi of Austerlitz" (possibly Issachar Baer ben Israel Leyzer Eilenburg, born in Posen, died in Austerlitz in 1623; JE 1901-1906, "Eilenburg", pp. 77-78).

More biographical details about the scribe Shabetai ben Zalman Auerbach are that he married Hendl, daughter of Issachar Ber ben Joel Kac of Vienna (Sadek 1969, p. 149, No. 5), and died on March 7, 1738, as we learn from the inscription on his tombstone in the Old Cemetery of Prague (Hock 1892, p. 7, No. 999). Indeed, the inscription in the lower cartouche on the title page of the Cincinnati manuscript records the date 1739, when the manuscript was “donated by Itzhak ben Yehuda” (נדבת יד הר"ר יצחק בהר"ר יהודא כהן (?) שנת תצ"ט לפ'). This must have been the owner of the Cincinnati manuscript, even though it is not clear to which synagogue he donated the manuscript after the death of the scribe.

Shabetai ben Zalman Auerbach (Scheftel), who defines himself as "an expert scribe and craftsman," designed and painted the title page of our Munich manuscript (fig. 3) and the seven gold initial words opening each of the main divisions of the text.

He also decorated the sole pen-drawn initial word for the blessing recited after the reading of Psalms (fol. 40 - fig. 4), filled with floral motifs and a human face. The stylistic resemblance of the latter to the painted title page suggests that all the decoration of the manuscript was executed by him. Indeed, it is noticeable how the facial features of the small sketchy face within the last letter yod of the word Yehi (יהי; fig. 4) recalls the basic features of Moses and Aaron on the title page (fig. 3). The small dark pupil brings the facial expression alive; and the straight horizontal lines indicating nose and mouth are also common features, although rendered in detail by colouring on the title page. Similarly, the foliate motifs of the initial word recall the style of those filling the arch on the title page. Further evidence of the scribe's involvement in the decoration is the Decalogue held by Moses, which was clearly penned by him.

In contrast to our manuscript (fig. 6), in the two later manuscripts by our scribe most of the gold-powder initial words are set within rectangular panels decorated with floral motifs, vases and stylized animals and birds (figs. 5, 7).

The bottom panel of our frontispiece (fig. 8) depicts six Jews wearing black cloaks and prayer shawls, three carrying prayer-books, walking towards a single-storey building, possibly a simplified depiction of the Klausen Synagogue, inscribed in Hebrew above the portal by a later hand: This gate of the Lord, into which the righteous shall enter (Ps. 118:20). This illustration recalls a procession of the members of the Burial Society depicted on painted beakers from Bohemia and Moravia, one example of which is from Prague dated 1713 (fig. 9; Shachar 1972, pp. 24-25). The Klausen synagogue, located near the Old Jewish Cemetery of Prague, was rebuilt in 1694 after its destruction in the fire ofPraguein 1689 and remodelled in the 1880s. Its interior was destroyed in WWII. The synagogue also housed the meetings of the Burial Society (Shachar 1972, p. 48 n. 11) and our manuscript could have been used by its members. Indeed, a Book of Psalms, not by our scribe, was copied in1723 inNikolsburg (Prague, Jewish Museum inPrague, Zidovske Muzeum MS 90; INV 170231) for the use of members of a Burial Society. Moreover, another manuscript, "Passage over the ford Jabbok" (Gen. 32:23), albeit from 1752, written for a Burial Society, shows on its title page a funeral procession of men recalling those in our manuscript and on the beakers (fig. 10).

The two other manuscripts copied by Shabetai ben Zalman Auerbach have title pages similar to ours (figs. 1, 2, 3). The iconographical source of these title pages follows those found in manuscripts and printed books.  The two figures of Moses and Aaron accompany other biblical scenes such as David playing the harp and scenes from the life of Jacob. ThePraguemanuscript of 1719 (fig. 1) also includes a central medallion with the Ark of Covenant and its two winged cherub's heads, similar to the one in the lunette of our Klausen manuscript (fig. 3). The medallion is flanked by two winged female figures.

The bottom panel (fig.1) encloses David kneeling within a medallion. Crowned and wearing royal garments, he is playing the harp next to a table with an open Book of Psalms. At the top left is the sun with a face below which is a small curtain, and behind David is a large red one (Fishof 1992, fig. 106 ב and pp. 32-35). The medallion is flanked by the dream of Jacob on the right and Jacob wrestling with the angel on the left.

The iconography of this title page follows almost exactly the title page of the Sefer Yefe 'Anaf printed in Frankfurt an der Oder in 1696 (figs. 1 and 11).

TheCincinnatimanuscript of 1731 (fig. 2) depicts David playing the harp in the top medallion. Compared to the previous scene (fig. 1) this depiction has only the upper part of the king's figure. According to Fishof, this is the second iconographical tradition of David playing the harp, which was often used on title pages of manuscripts and printed books, as can be seen for example in seven of the manuscripts by the scribe Yacob Sofer of Berlin (active 1718-1741; Fishof, 1992, pp. 32-36, 79-80, 71, 76-77). See for example his Seder Tikkunei Shabbat of 1724 (fig. 12).

In conclusion, the Klausen book of Psalms is the earliest known manuscript copied by Shabetai Scheftel ben Zalman Auerbach, who was active in the years 1706-1731 inPrague, where he is buried. Two of the three manuscripts were ordered for two synagogues in that city, the Klausen and Meisl Synagogues. The third was written in memory of his family, going back four generations. 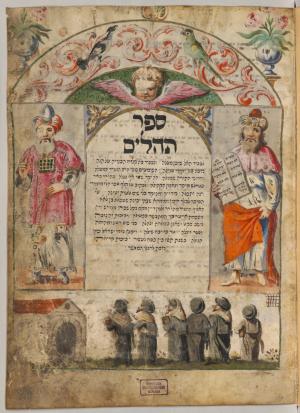 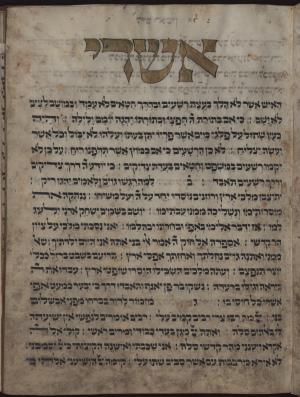 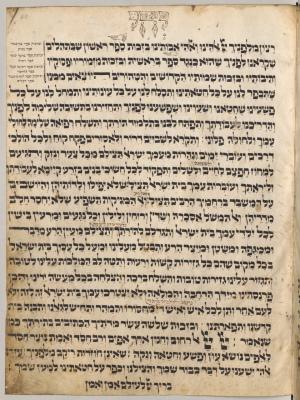 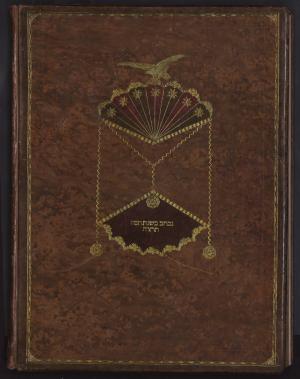 A cardboard binding of 1935, covered with brown leather with gold-tooled decoration. The front cover has a rectangular frame, surmounted by a conch, with a medallion in the centre. The medallion is inscribed in gold: שייך לביהכ"נ/ קלוזן/ דק"ק פראג (Belongs to the Klausen Synagogue inPrague). The frames and conch, in alternating red and green, colours are bordered and decorated with floral and foliage scrolls, festoons, large rosettes and stars.

The back cover is decorated with a fan motif at top and bottom, the top divided into alternating green and red ribs, surmounted by an eagle. The bottom fan, in dark red, is inscribed in gold: נכתב בשנת תס"ז/תרצ"ה (Written in the year 5467 (1706)/bound in 5695 (1935)). Winding gold fillets connect the two fans, which are decorated with festoons, rosettes and stars.

The spine is divided into five sections, probably by four invisible cords, in alternating light and dark brown leather, decorated alternately with a central branch and hatchings, except for the second section from the top which the gold-tooled inscription ספר תהילים (Book of Psalms).

On the lower part of the spine is a library sticker: Cod. Hebr. 473.

The decoration of the manuscript consists of an architectural title page. The figures and decoration are in black ink outlines and painted in red, pink, green, blue, black and brown wash, with gold powder dots.