Silver book bindings are one of the most elegant objects of Jewish ritual art. The form is generally copied from Catholic and Orthodox Christian tradition where prayer books were often covered with silver bindings in keeping with the other elegant silver pieces used in the prayer service. As in many other areas of life, Jews emulated some customs from what they saw of their Christian neighbors. Since such a binding was an expensive purchase for an individual, such silver pieces are fairly rare. Their appearance is most widespread in Italy, but examples also exist from Germany, Poland, Ukraine, Austria, and even the Ottoman Empire.

This silver bookbinding covering a Hebrew prayer book is one of the oldest known to exist today, dating from the last decade of the 17th century in Hamburg. The silverwork is of the highest order. A Tas (in the Israel museum), a pair of Rimmonim (in the Cymbalista collection), and a wedding belt (Sivlanot) are recorded from this master's hand as well. The book contained in the binding is an Ashkenazi prayer book printed in Amsterdam some years earlier. 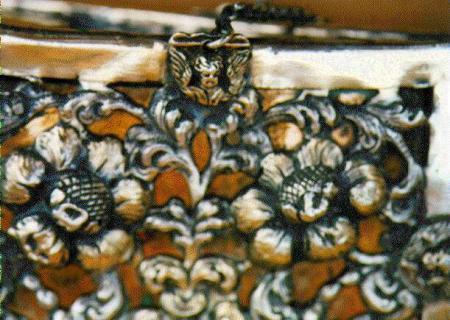