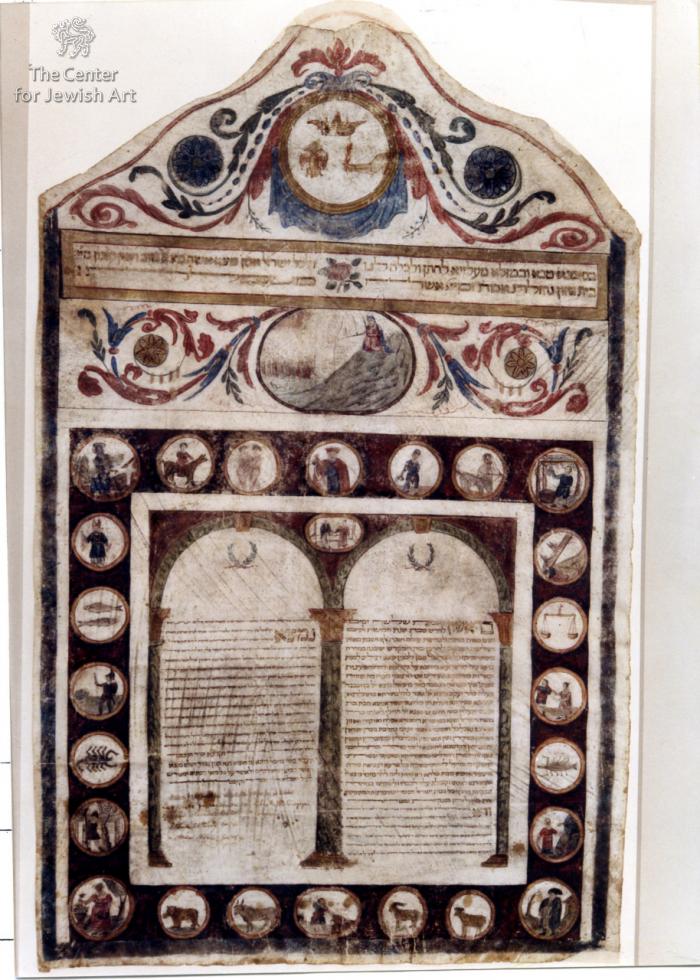 "Michael Maza the son of the honourable Rabbi Jacob Maza"

The rectangular ketubbah is topped by a wavy arch enclosing the family emblem. A double arch framed by medallions is supported by three Corinthian-like columns, enclosing the traditional text of the ketubbah on the right and the tena'im (the conditions and obligations of the husband in case of divorce or his death), on the left side.

Above the central column is an oval medallion enclosing a man and a woman standing in a room and holding hands, representing the married couple. Twenty-four medallions surround the double arch depicting the personifications of the Four Seasons in four corners, and the twelve Zodiac signs, alternating with biblical stories (see: Remarks: no.1).

The biblical stories are depicted randomly in two groups within the side bands and two single medallions in the upper and lower bands; David playing the harp (I Sam. 16:23) is in the central upper row, while the Sacrifice of Isaac (Gen. 22:1-18), is set in the same axis in the lower row. The other episodes are read clockwise, beginning with the second medallion from the right column: Jacob’s dream (Gen. 28:11-13), Joseph and Potiphar's wife (Gen. 39:7-17), Yael and Sisera (Judg. 4:17-22). In the second medallion in the bottom left column is the depiction of Samson destroyingGaza(Judg. 16:3), followed by Joshua stopping the sun inGibeon(Josh. 10:12), and Aaron the Priest.

The personification of the Four Seasons are depicted randomly, and read clockwise from the upper right corner: Summer is a man sitting within a vine booth picking grapes; Winter features a warmly clothed man holding hands in muff; Spring is a woman with a basket full of flowers; and Autumn is represented by a woman with a psyche and crops.

The Zodiac signs are divided into four groups; four on the top and the bottom bands and two on the sides. They are depicted in an arbitrary order and not according to the year cycle, starting with Scales (Libra) of Tishrei, depicted as balanced scales, and Scorpion of Heshvan, in the right band. Four animals facing left are set in the bottom band, starting with the Lamb (Aries) of Nisan, depicted as a ram; the Kid (Capricorn) of Tevet is to its left, featuring a horned goat; Taurus is the Bull of Iyar, and the last depiction is the Lion (Leo) of Av. The two signs in the left band start with Cancer of Tamuz in the third medallion from the bottom; the Fish (Pisces) of Adar are two inverted fish. The four last medallions are in the upper frame, depicting the Virgin (Virgo) of Elul as a woman wearing a red dress and riding a unicorn; the Twins (Gemini) of Sivan are two naked embracing children with crossed legs; the Bucket (Aquarius) of Shevat is a man holding a jug in each hand with water pouring out of them. The cycle ends with the Bow (Sagittarius) of Kislev as a bearded Centaur holding a bow.

Above the frame is an architrave formed of two horizontal bands: The lower features a large oval medallion with Moses receiving the Law onMount Sinai. He is holding the Tables of the Covenant, kneeling on the peak of the mountain and gazing at the people of Israel, standing at the foot of the mountain (Ex. 19:18-23). The medallion is flanked by two symmetrical scrolled branches with an open flower and elongated leaves. The upper narrower band is inscribed with the benedictions, written in two lines in square, Sephardi characters: beginning with the blessing (in Aramaic):

"With a good omen and favorable fortune to the bridegroom and the bride and us, and all ofIsrael…." A rose is depicted in the centre of the inscription.

A large round medallion is set within the top of the ketubbah, enclosing a family emblem combined of two symbols, possibly of the bride and groom. The emblem features a hand holding a branch (a flag?) on the right side, possibly the coat of arms of the Cesena family (see: Remarks: no. 2). To the left is a double-headed eagle, both surmounted by a crown. A small curtain is hung from the medallion's lower edges, while two symmetrical scrolled branches with open flowers and leaves emerge from a crown-like crest that surmounts it.

1. This ketubbah is typical in its decoration program and visual components to ketubbot made in the Veneto region, and especially in Venice of the eighteenth century onward (see: Sabar, Ketubbah, pp. 184-189; 257- 258). The arch shaped parchment enclosing the family emblem is one of the characteristic elements of the Venetian visual tradition, along with the Zodiac signs, the personifications of the Four Seasons and the biblical episodes, all framing the text. A similar ketubbah also made in Corfu twenty years earlier (1819), features the same decoration program as well as similar iconographical components (cf. Davidovitch, The Ketuba, Joseph Stieglitz coll., p. 64, plate VII). However, the Four Seasons are depicted in the correct chronological order, though the Zodiac signs are featured randomly, almost parallel to the order in our depiction. Especially remarkable are the four animals in the bottom row. Only four biblical episodes appear in the 1819 contract, yet the placement and the iconography correspond the Cesena-Maza contract.

It can be assumed that the Joshua-Cohen (1819) and the Cesena-Maza (1840) contracts were modeled after similar ketubbot originating in Venice in the eighteenth century, and were not of Venetian origin, as some Greek ketubbot were (for illuminated ketubbot imported from Italy to Corfu, cf. Sabar, Ketubbah, pp. 236; 257- 258). This is based on the arbitrary order of the Seasons and the Zodiac cycle. The biblical stories in the Italian contracts sometimes relate to the names of the marriage couple, which are lacking in the Greek contracts.

This includes a unique clause, stated by the bride, who promises: "to honour him and serve him in cleanliness and purity, as decent and modest Jewish women (…)" (lines 19-20). An additional textual component typical to Greek Romaniot ketubbot is the appearance of a double dating system: they preserved the early tradition calculating the years from the destruction of the Second Temple (the year of the destruction is mistakenly considered to be 68, see: Sabar, Ketubbah, pp. 236; 257-258). Along with the calculation from the creation of the world that is the most frequent era, used in various communities.

2. A hand holding a flag appears on a marriage contract signed in Anconain 1803, now part of the Israel Museum Collection no. 179/136; see: Sabar, Mazal, p. 88, fig. 21). Both bride and groom are from Corfu and the bride's name is Rebecca, daughter of Hayim Cesena. It is unknown whether Hayim Cesena is the same person and the father of both Rebecca - of this contract and Esperansa - the bride in our ketubbah. What is probable is that the emblem represents theCesena family. The double-headed eagle is still unidentified. 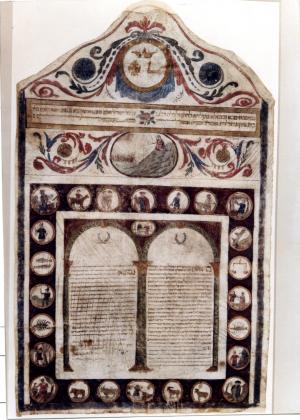 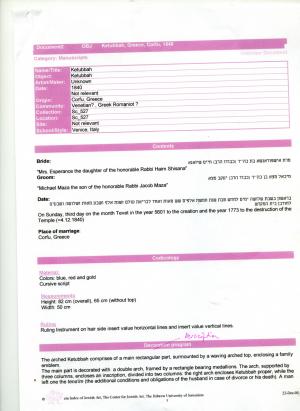 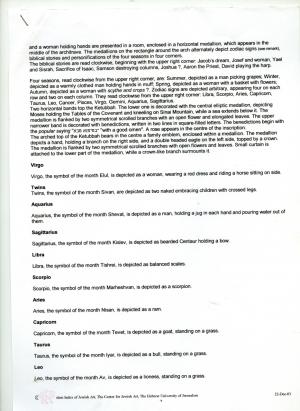 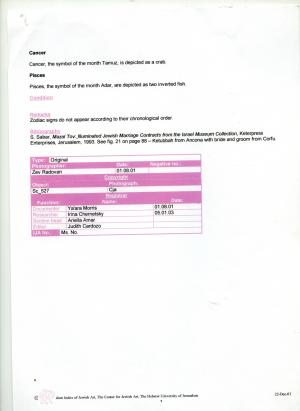 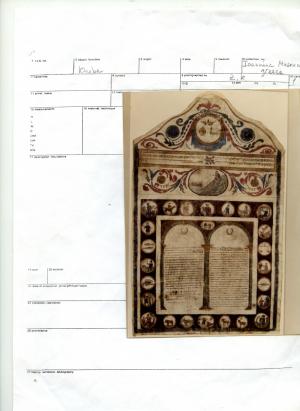 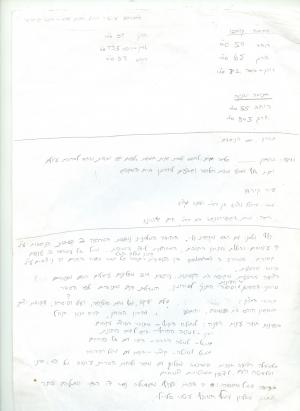