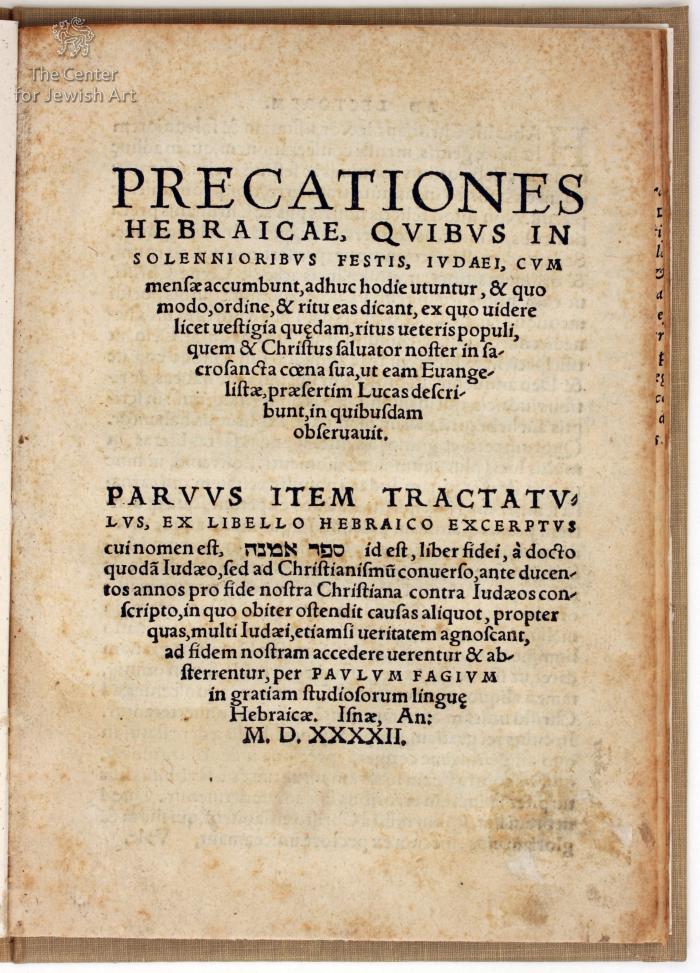 Version of the Birkat Hamazon in Hebrew with Latin translation and explanation followed by the "revised" Christian version of a section of the Birkat Hamazon in which the Jewish motifs are replaced by Christian Messiah motifs. This is followed by a text in Hebrew and Latin: "The things that prevent Jews from believing in the Messaiah", which is an abridged version of the missionary book "Sefer Amana", The Book of Faith". This Hebrew edition and Latin translation comprises a selection of Jewish prayers (including the grace before and after meals) and their revision for Christians wishing to pray in Hebrew. The full title of Fagius’s book of Hebrew prayers "Hebrew Prayers, which the Jews, when they recline at the table on their more solemn holidays, use unto this very day, and the way, order and ceremony with which they say them, from which one may glean certain vestiges of the ritual of the ancient people, and which Christ our Savior, as the Gospels, especially Luke, describe them, observed at the Last Supper" evokes the way in which the study of Hebrew and Jewish texts by 16th and 17th century scholars was both informed by the observation of contemporary Jewish life and applied to the study of the New Testament and the observance of Jewish law and custom by Jesus and his disciples portrayed therein.
Paul Fagius (1504 - 1549) was a schoolmaster's son from a small town on the Rhine who would become one of the most important Christian scholars and printers of Hebrew of the first half of the 16th century. While serving as minister in the town of Isny, Fagius established a Hebrew press and persuaded the aged Jewish grammarian, lexicographer, biblical scholar and Yiddish poet Elijah Levita (a direct ancestor of Prime Minister David Cameron) to cross the Alps from Venice and to join him there to edit and print Hebrew books. Fagius and Levita were a dynamic duo, and in the years 1541-43 they produced some of the most lastingly important editions of Hebrew and Aramaic biblical, rabbinical, exegetical, lexicographical and grammatical works of the sixteenth century. 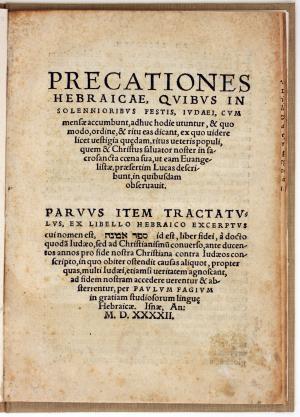 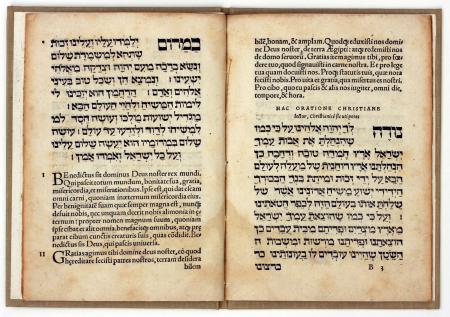 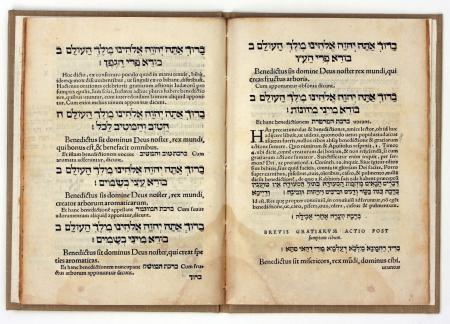