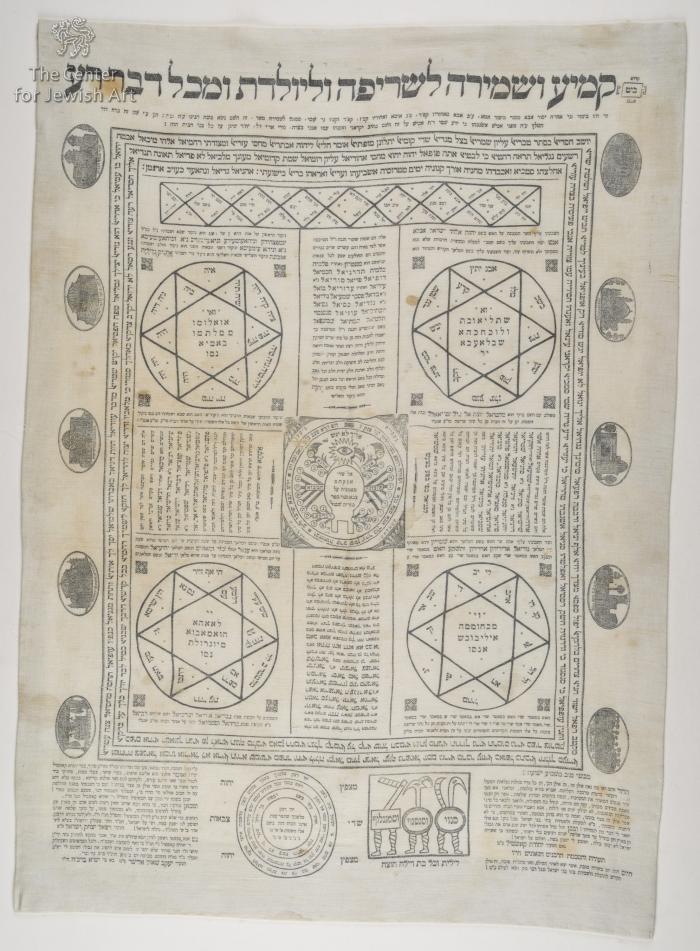 This specific form of amulet was first published by Israel Dov Frumkin soon after the establishment of his printing press in Jerusalem in 1874. It was published in two different versions then as well as on different colored paper. Subsequently it appeared in many different printings, some by Frunkin himself but afterwards by many different presses in other variations even until today. This example was printed by Shmuel Zuckerman and was printed in four different versions: a print in gold ink from 1893, this textile from 1894, a print from 1904, and a print from 1914. Many of these publications are represented in the Gross Family collection. Both Frumkin, for almost 30 years, and Zuckerman, for almost 50 years, were important printers of books and single sheets. Such a single sheet was printed to be hung on the wall of a home and represents the kind of printed single pages that made their frequent appearence in the marketplace during the last half of the 19th century. This is the type of decorative page that provided the average Jewish person with the ability to have "art" on the walls of his home. Frumklin was the son-in-law of the first printer in Jerusalem, Yisrael Bak, and worked in Bak's printing establishment from 1870 until he acquired his own press four years later. He was also the printer and editor of the Hebrew newspaper "Havatzelet".

This amulet was intended, as described in the large letters at the top, as a talisman and Shmirah against fire, as a protection for a pregnant woman and as a general shield against all bad things. It contains many Kabbalistic formulae and "names" as well as a number of visual elements, including the depiction of an angel at the center that became the defining image of a great many amulets printed in Jerusalem. The image originated in Eastern Europe, but was copied in the Holy Land and became exceedingly popular as an amuletic device on publications in Jerusalem. The amount of text is much greater than what is normally seen and deals with names of angels and other Kabbalistic lore for protection of the house and its inhabitants. 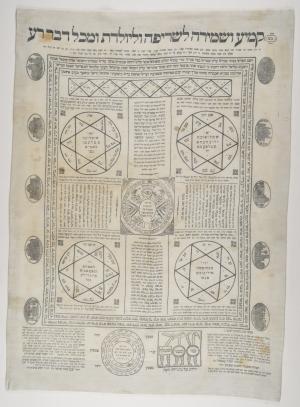