Ritual objects of this early date are few from this part of Eastern Europe. This is one of the earliest Torah silver ritual objects surviving today. Due to the many tragedies that befell the Jews of this area during the 17th and 18th centuries, very few Jewish objects remain from the period. The use of many animal figures, both real and mythical, the twisted pillars, and the baroque elements place the origin of this Tas in the area of Ukraine.

Inscription: The Holy Sabbath. Belongs to the Beit Hamidrash This Was Donated by the Our Prominent Teacher, the Rabbi Reb Meshil, Son of the Rabbi, Reb Chaim, the Righteous, of Blessed Memory, According to the Order and the Reckoning (5)528 (= 1767/8) 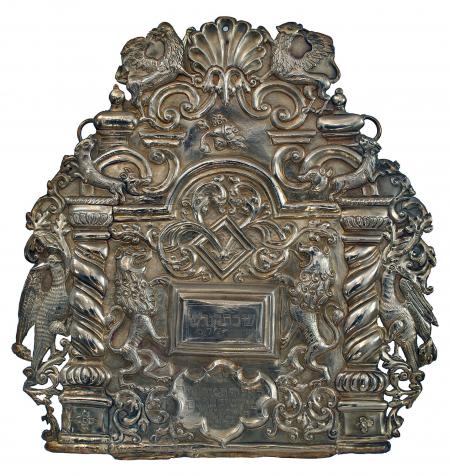