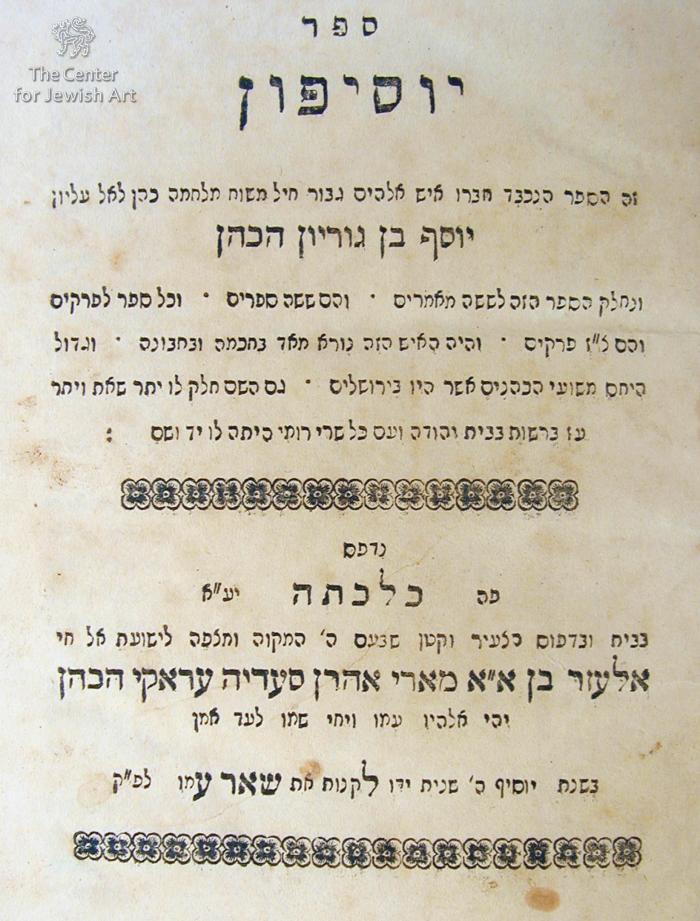 Yosifon is a chronicle of Jewish history from Adam to the age of Titus believed to have been written by Yosifon or Joseph ben Gorion. Yosifon was compiled in Hebrew early in the 10th century by a Jewish native of south Italy. The first edition was printed in Mantua in 1476. The book subsequently appeared in many forms, one of the most popular being in Yiddish, with quaint illustrations. Though the chronicle is more legendary than historical, it is not unlikely that ancient sources were used by the first compiler. The book enjoyed great popularity in England. In 1558, Peter Morvyn translated an abbreviated version into English, and edition after edition was called for. Lucien Wolf has shown that the English translations of the Bible aroused so much interest in the Jews that there was a widespread desire to know more about them. This led to the circulation of many editions of Josippon, which thus formed a link in the chain of events which culminated in the readmission of the Jews to England by Oliver Cromwell. The Ethiopic version of Yosifon is recognized as canonical by the Ethiopian Orthodox Church.
The work is ascribed to Joseph ben Gorion (יוסף בן גוריון), a Jew living in southern Italy in either the 9th or the 10th century. As the Muslim writer ibn Hazm (d. 1063) was acquainted with the Arabic translation by a Yemenite Jew, Daniel Chwolson proposes that the author lived at the beginning of the 9th century.
The Yosifon was widely read by Jews in the Middle ages and frequently quoted by biblical and talmudic commentators. An historical account of the period of the Second Temple written in Gebrew, it can be dated on internal evidence to the middle of the tenth century, and one manuscript even carries a precise date to 953 CE. The anonymous author lived in sourthern Italy, then part of the Greek-speaking Byzantine empire. But because he used as his main source a Latin manuscript which included sixteen of the twenty books of the Jewish Antiquities of Flavius Josephus and the Gegsippus, a Latin adaptation of the Jewish War, he probably could not read Josephus' original Greek. by the next century the book was attributed to Hosephus himself and called Sefer Yosifon (Yosifon si the Judaeo-Grek form for Josephus). Most printed editions relay on a text first printed in Constantinople in 1510 and republished in Venice in 1544, although the shorter text pulished in Mantua in 1480 has apparently suffered less interpolation and is thus closer to the original. This Judeo-German or Yiddish translation, the first in that language, is one of many translations into other languages. A Yemenite Jew translated the Yosifon into Arabic by the eleventh century. The failure of the Yosifon to mention the beginnings of Christianity also spawned intense interest in the boo by later Christian humanists and its subsequent translation into European languages.
This is the first edition of this book to be printed in India and is among the earliest books printed in Calcutta. There is a printers mark from the firm of Hacohen, but it is a version not listed in Yaari. 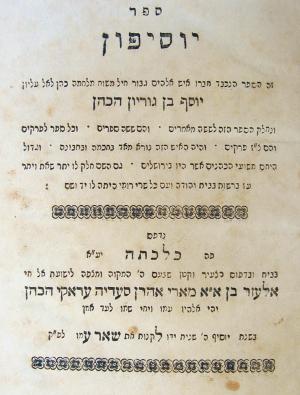 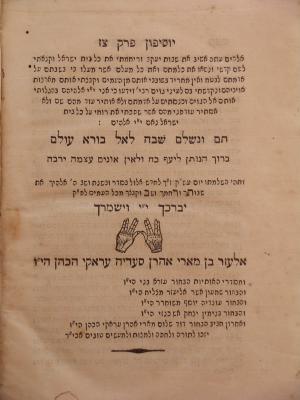