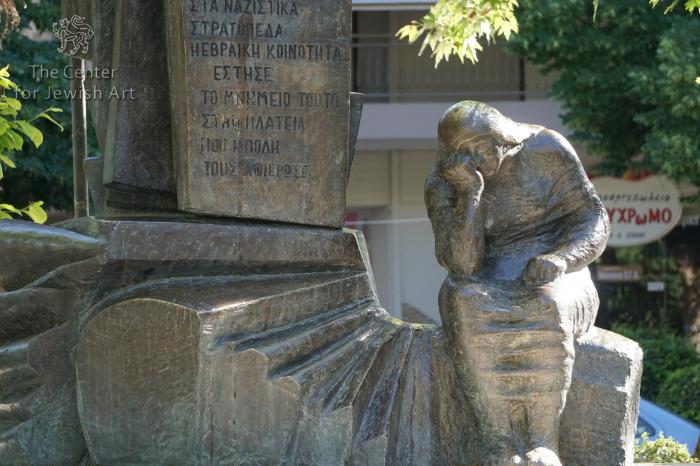 The monument fills a large part of a city circular plaza (Square of Jewish Martyrs of the Holocaust) that is surrounded by a ring street. This area was the heart of the old Jewish neighborhood. Nearby, across the street, is still the synagogue and offices of the Jewish community and a pharmacy owned by a leader of the Jewish community. Several popular cafes face the square, and one is located on the square facing the monument itself.

The monument consists of a large bronze sculpture set on a low rectangular stone base that is itself set on a higher raised concrete and stone platform, that serves like a stage within the square, most of which is at a lower level reached by step from the street. One step of steps wraps around one side of the monument platform. The face of the concrete platform was intended as a backdrop of a fountain. It is articulated in uneven segments with small half-sphere protrusions with nozzles, and a small producing basis. The water element was difficult to maintain, and the area of the fountain intended for water is now filled with soil and greenery.

The central element of the bronze sculpture is the figure of a seated woman, with her right arm resting on her right thigh, and face supported by her right hand, as she lowers her head and looks downward. Her left hand rests in her lap. Her costume is indistinct, but she has her head covered with a scarf that also covers her neck and shoulders, and she appears to wear a long dress that reaches her ankles and covers her arms with long sleeves. The modeling of the figure recalls ancient Greek sculpture in the pose and the treatment of the dress, which molds itself to the figure's body. The posture of the figure is a traditional one of mourning known in Greek art, and was sometimes adapted after the 18th century in representations of Jewish exile and grief.

The woman sits on a bronze stone or step that as a single sculpted element bends and rises to her right into what appear to be stylized steps that become a pillar over three meters high. To her left is a separate “boulder” of bronze that helps visually anchor the work, but also connects the scene to the natural world. The pillar gives the impression of being constructed of a group of large, finished slabs or tablets set vertically, upon the outermost of which is inscribed the direct and information commemorative inscription. These vertical “slabs” are then topped with a group of flat and wedge-shaped horizontal slabs that cap the entire monument. The bronze sculpture from merges natural and architectural elements; and abstraction and figurative representation.  The “slabs” can be interpreted as gravestones, tablets, or books. The meaning is not clear, but the effect is dramatic.

Translation: 1944-1945. The Jewish community erected this monument on the square dedicated by the city of Larissa, to the memory of the 235 innocent Jews of Larissa and their 6,000,000 brethren, who were victims of an atrocious genocide in the Nazi camps. 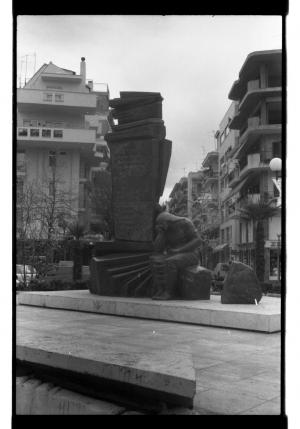 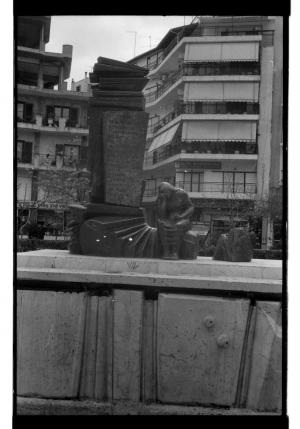 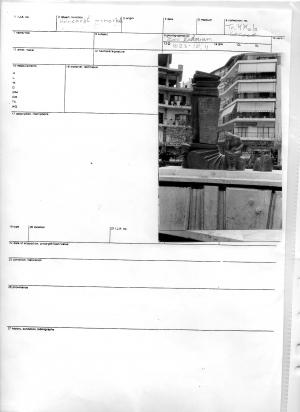 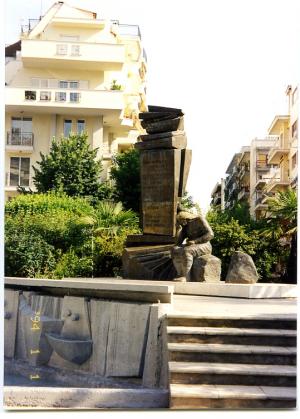 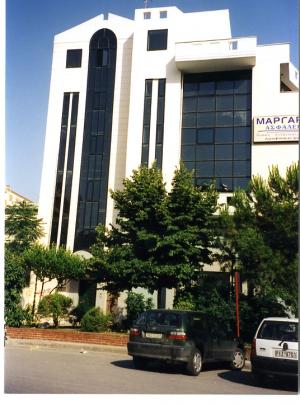 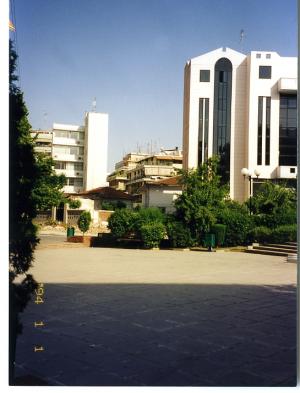