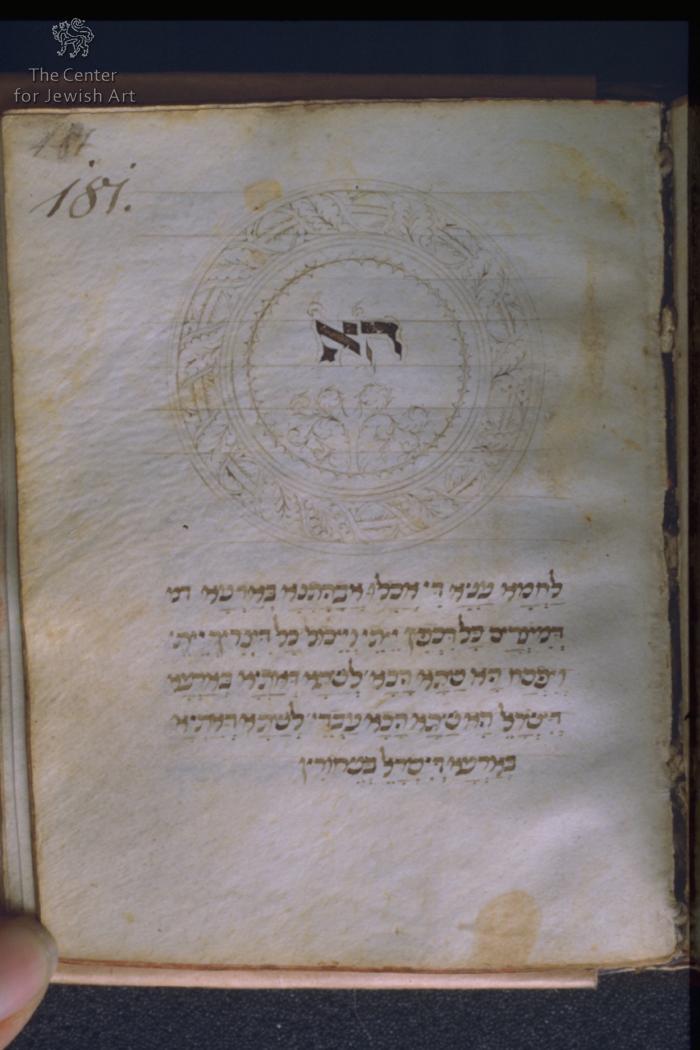 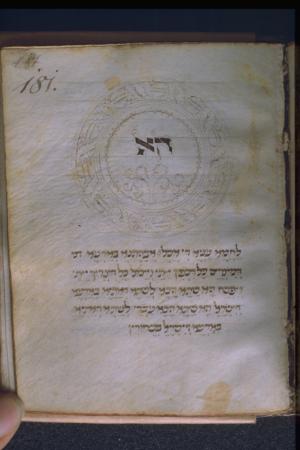 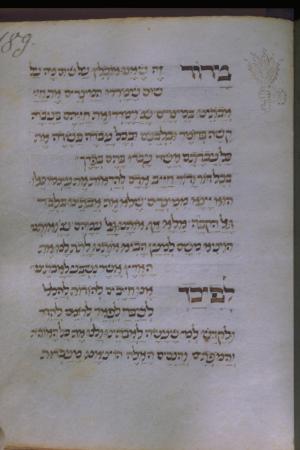 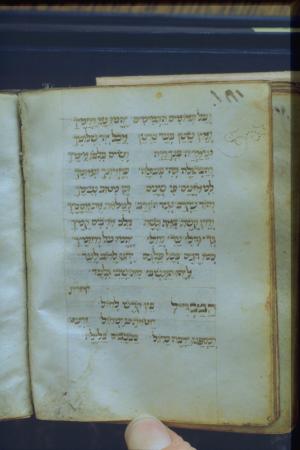 No pricking is visible

Scribes
Script
Number of Lines
Ruling
Pricking
Quires
Catchwords
Hebrew Numeration
Blank Leaves
Direction/Location
Façade (main)
Endivances
Location of Torah Ark
Location of Apse
Location of Niche
Location of Reader's Desk
Location of Platform
Temp: Architecture Axis
Arrangement of Seats
Location of Women's Section
Direction Prayer
Direction Toward Jerusalem
Coin
Coin Series
Coin Ruler
Coin Year
Denomination
Signature
Colophon
None
Scribal Notes
Fol. 54v and 56v – the letters forming the name אריה are marked within the text in acrostic form Fol. 100v – the name אריה appearing in the text is marked by a scroll made of dots, extending into the margin: Instructions to say Kaddish (written by the scribe?) in Italo-Sephardic semi-cursive script 1. Fol. 43v, 6th line from the top: ואומ' קדיש עד לעולם ומוציאין ס"ת [ספר תורה] וקורין/בענינו של יום וקדיש עד לעולם ואומר/אשרי ואחכ אומ "And say Kaddish up to "all times" then take the Torah out of the Ark and recite the readings of the day and Kaddish up to "all times" (again), then say Ashrei and then continue [with the text which follows in the siddur]". 2. Fol. 48, 3rd line from the bottom: למנחה/אומ אשרי וקדיש עד לעולם ושמנה עשרה/בלחש וברכת [?] ליוצר וקדיש גמור ואומ "For Minhah one says Ashrei and Kaddish up to "all times" and Shmoneh-Esre (Amidah) in silence and the blessing […] for Yozer? And full Kaddish and continues [with the text which follows in the siddur]". 3. Fol. 51, 5th line from the bottom: קדיש עד לעילא (?) / עשרה עלינו לשבח וגו' / בערב שבת אומ' (?) / וקדיש עד לעילא בסדר החול ואח"כ אומ' / מעריב של שבת "Kaddish up to לעילא? ("beyond all"), Shmoneh-Esre(?), Aleinu Leshabeh, etc. In Sabbat Evening say […] and Kaddish up to "all times" in weekly service and then continue with the Arvit for Sabbath".
Watermark
Hallmark
Group
Group
Group
Group
Group
Trade Mark
Binding
Decoration Program

The decoration was made in one stage probably by the scribe himself. It consists of pen-drawings in light brown ink in the same tonality as the script.

The ViennaWoman's Siddur (Cod. Hebr. 86) is a tiny prayer book of Roman rite for weekly prayers with special additions for Festivals and High Holidays. It is evident that this prayer-book was intended for the use of a woman, as indicated by the first two in the preliminary morning service, ending with the formula: "…who did not made me a shifha (female slave)" (...שלא עשני שפחה); and "... who made me as He wished" (... שעשני כרצונו) on fol. 3v. Interesting to notice that the third blessing usually referring to gender שלא עשני גוי / שעשני ישראל, is totally missing in this manuscript. In other prayer-books of the Roman rite, produced in Italy apparently in the third and last quarter of the 15th century (see: Cohen, "Women's Prayer Books", pp. 305-312) one can find the same variants in the preliminary blessing. This indicates that the manuscripts, as well as Cod. Hebr. 86, were copied for a woman, as sometimes is also attested in the colophons, as for example in a Siddur copied by Abraham Farissol in 1471 or 1478 (New York, Jewish Theological Seminary Library, ms. 8255; here the scribe states he copied the manuscript for a male owner, whose name is erased, and his wife, who was the actual user of the Siddur, as also attested by the preliminary morning blessings on fol. 5v; see: Cohen, ibid., pp. 308-310).

Although the manuscript is lacking a colophon stating the date and place of production, the name Arieh is emphasized three times within the text (fols. 54v, 56v and 100v), and we believe it being the name of the scribe, whose hand is unknown from other manuscripts (the name Arieh is emphasized also in another Mahzor of Italian rite of the 15th century, yet the script is clearly different than that of the Vienna Woman's Siddur; see: Parma, Biblioteca Palatina, Parm. 2405, fol. 100).

The codicological features as well as the script of the Vienna Woman's Siddur are clearly of Italian type. Moreover, ruling by ink gives approximately the year 1427 as terminum post quem (see: Beit-Ariè, Hebrew Codicology, 1981, p. 78). The meager decoration program of the manuscript consists of only two pen-drawn text illustrations for two passages of the Haggadah, recurring in most Italo-Ashkenazi illuminated haggadot and prayer books from the 14th till the early 16th century. The first depiction, a round medallion reminding the seder plate enclosing the initial word "This [is the bread] (הא [לחמא]) (fol. 181), is actually less frequent, as usually this passage is illustrated with a depiction of the seder basked containing the three mazzot, raised by a group of people or simply by hands, as for example in a Mahzor of Roman rite, copied in Fermo in 1431, (formely: London, Jew's College, Montefiore Library, ms. 213, fol. 88; see comparison # 1; Narkiss, Italian Manuscripts;). The depiction in the Vienna manuscript with a large roundel looks more like the depiction of the large Mazzah within the text space of the text it illustrates, appearing in some Italian manuscripts, such as in the Bodleian Italian Mahzor (Oxford, Bodliean Lib. Mich. 610, fol. 94v; see comparison # 2; Narkiss, Italian Manuscripts, No. 49). In the Vienna Woman's Siddur the passage of "Mazzah" is not illustrated.

The second illustration depicts one hand with no arm holding a bunch of lettuce illustrating the passage of Maror (fol. 189). The representation of the Maror as a bunch of lettuce leafs recalls the analogous illustration in many other Italian manuscripts of the 15th century, in particular that in the "Rothschild-Weil Mahzor" (see: vol. I in Jerusalem, Jewish National and University Library, 8° 4450; fol. 120v – see: comparison # 3), dated around 1460-1470 (see: Metzger, "Un Mahzor"). Both manuscripts display the detail of the detached hand holding the bunch, whose wrist is decorated with a scalloped sleeve.

Both illustrations in our manuscript are executed in fine uncoloured pen-drawing, most possibly by the same hand, which is remaining unidentified. Possibly other decoration was intended to be added in the manuscript but never executed, as indicated by large space left empty around some initial words, such as for the first initial word "These" (אלו [מאה ברכות] ) on fol. 2v, and for the opening of the section for the Sabbath (fol. 64).

In conclusion, the Vienna Woman's Siddur was copied and decorated for a woman, in the second half of the 15th century in Central-Northern Italy.