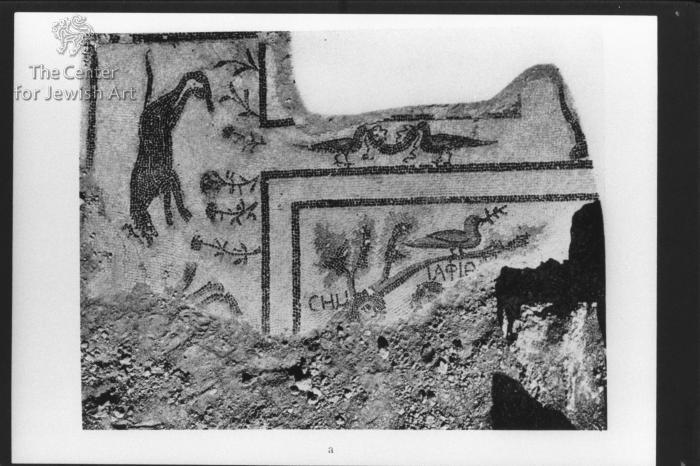 The mosaic floor is located in the nartex (vestibule). It consists of a long oblong central panel surrounded by a narrow border. In the center of the south side of the border is a panel of sanctuary implements with a Greek inscription. In it’s center is a curved seven-branched Menorah, standing on three legs. The Menorah is flanked by a Mahta and a Shofar on it’s right, and by a Lulab and an Ethrog on it’s left. The Greek inscription, inscribed in two columns on either side of the Menorah, reads as follow: “Holy place. Amen. Sela. Peace to the synagogue.”.

The left corner of the central panel was partly preserved, and shows a dove standing on a tree, carrying a branch in its beak.

Two of Noah’s sons are depicted beneath the tree, and to their right are animals, possibly all coming out from the Ark (Gen. 9) (which was possibly on the damaged part of the panel). Only the heads of Shem and Jafeth have remained, Inscribed above their heads, written in Greek: “Shem”, on the left, and “Jafeth”, on the right.

The animals on the right side of the central panel, are arranged in three rows, facing right.

The upper row shows the birds including doves, peacocks, and geese; the middle row portrays the beasts, such as horses, sheep, and gazelles; while the lower row contains reptiles and beasts, such as a hare and snakes.

The border frieze depicts beasts pursuing each other on the north side of the panel.

The panel was designed to be viewed from the south.