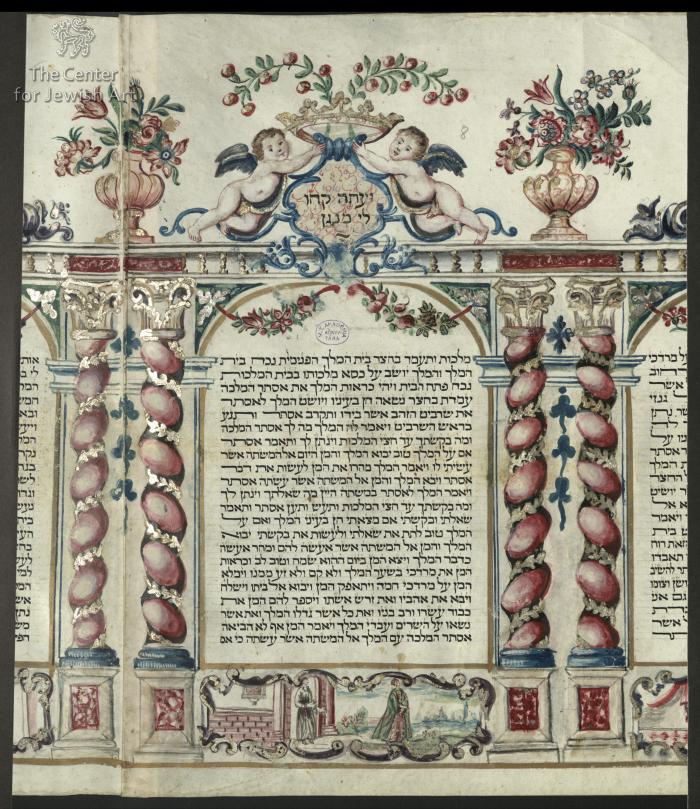 The decorative program of this lavishly decorated megillah is based on an architectonic frame with a balustrade on which a variety of ornamental motifs is placed: allegorical figures, putti flanking cartouches with Hebrew inscriptions and supporting a crown, flower-filled vases, garlands, and cartouches decorated with a mask. Above each text panel there are allegories depicted as seated women holding different attributes alternately with pairs of putti. In the text panels below the allegories, empty cartouches decorated with a mask are incorporated. The Hebrew text of the Book of Esther is written within arcades flanked by twisted columns. Above them, flower-filled vases are placed; they separate allegories and pairs of putti in the upper margins. The lower margins are adorned with miniatures chronicling the Purim story framed in cartouches interspaced by columns' bases.

The scroll is accompanied by a separate benediction sheet decorated with the same ornaments as the megillah itself. Both are housed in a modern case.

The family of profusely hand-decorated scrolls that differ in detail, but they all include allegorical representations. In most cases, they are seated women with attributes that are strongly modeled on the iconographical imageries included in “Iconology” by Cesare Ripa (1555–1622). His work printed for the first time in Rome in 1593 was one the favorite manuals for the European artists in the 17th and 18th centuries.