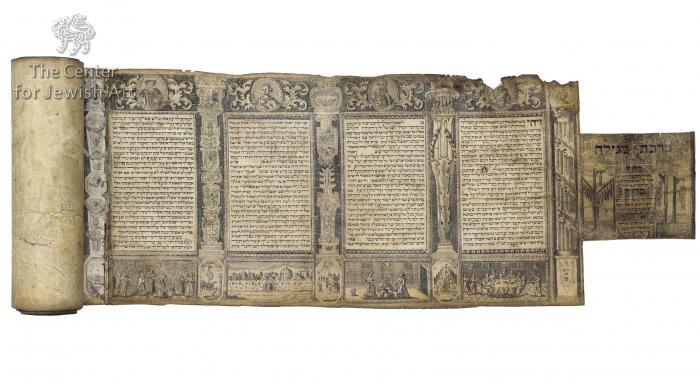 The first sheet contains the opening decoration (partly preserved) and four columns of the text (nos. 1-4):

Opening decoration: In this exemplar, only two narrative scenes from the Esther story are preserved. In a rectangular panel, directly below, the Hebrew words ברכת מגילה - "blessings for the Megillah" are printed. Below, there are three rectangular frames: the central panel contains the benedictions recited before the Megillah reading that are decorated by hand, the panel on the right shows the chamberlains, Bigthan and Teresh, hanging on two gallows (Es. 2:23), whereas the one on the left depicts Haman and his sons hanging on three gallows (Es. 7:10 and Es. 9:14 or Es. 9:25). The upper and lowest registers of the original decoration are cut off.

Text column no. 1: The initial word of the Megillah (ויהי) is written in enlarged and bolded letters. In the upper margin, above the column, a medallion with a bust of the king flanked by acanthus leaves is depicted. In the lower margin, the feast of the king is shown (Es. 1:3-8) - there are six men seated at a round laid table; additionally, on either side of the table, servants are visible.

Text column no. 2: In the upper margin, a bust of a man with a mustache and a cap on his head (Haman?) is shown. In the lower margin, Queen Vashti is portrayed while she is strangled by two women standing on either side of her. During the execution, she keels with hands folded on the chest, and the crown lies on the floor, behind her. The Book of Esther does not mention the fate of Vashti after her refusal of the king's order and the source for this representation is unknown.

Text column no. 3: In the upper margin, a bust of a young woman (Esther?) is depicted. The frame in the lower margins contains the depiction of the walled city. In the central part of the wall, there is a gate at which a man (Mordecai) is seated (Es. 2:19 and/or 2:21).

Text column no. 4: In the upper margin, a bust of a bearded man with a flat cap on the head (Mordecai?) is depicted. In the frame in the lower margin, a wedding ceremony of Ahasuerus and Esther is represented. The scene is witnessed by a group of men standing on the left and a group of women standing on the right. The Book of Esther does not mention this episode and the source for this representation remains unknown. It can be influenced by European paintings in which the scene of the marriage of the Virgin Mary and Josef was similarly composed. This can also explain the dress of a man standing in the center that refers to the high priest's robes.

In the octagons separating the frames are depicted (from the right to the left): 1) a mask, 2) a (palace?) garden with a fountain, 3) a cityscape with the sun shining over a city, 4) a ship on the sea.

The opening decoration of the scroll is partly preserved; it lacks its upper and lower registers.

Some minor damages in the edges of the first sheet can be seen.

The first membrane is darker than all remaining membranes in the scroll.

In general, the text is well preserved, although the sheets are crumpled; the text in the final panel is preserved in the worst condition.

The scroll is formed of 4 sheets containing 16 columns of text and two additional benediction panels at the beginning and the end of the scroll. Each column includes 26-27 lines of text. The text in col. 14 is printed; it contains 11 lines divided into two half-columns.

The text is inscribed in the Hebrew square script in brown ink on the flesh side of parchment membranes.

The benedictions: The initial benedictions are inscribed in the square letters in the central panel of the opening decoration. All three words ברוך are decorated with a filigree ornament.

The former number of the manuscript is Ms 312.