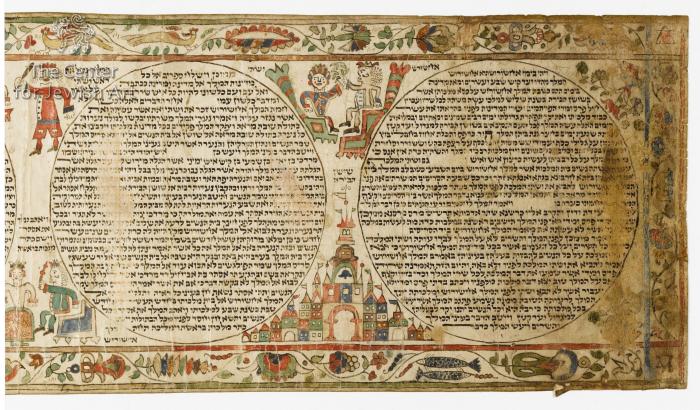 The upper and lower margins are decorated with belts filled with foliate and floral ornaments in which birds and fish are woven.

Illustrations between roundels nos. 1 and 2: The upper scene shows enthroned Ahasuerus and Vashti holding the ends of the same leafy branch in their hands. They are named with their names in Hebrew: אחשורש ושתי

Illustrations between roundels nos. 2 and 3: The upper scene shows the execution of Queen Vashti (not mentioned in the Book of Esther). On the right, an executioner in a red suit is shown and on the left, the upper half of Vashti can be seen (not visible in this photograph). It is inscribed in Hebrew:

The lower scene shows the coronation of Esther (Es. 2:17): King Ahasuerus sits on the throne with a scepter in his hand and Esther is standing in front of him; both are crowned. The scene is inscribed in Hebrew:

The opening part is very dark and the decorations on it are damaged.

Some parts of the text are erased.

The scroll is formed of 3 sheets containing in total 9 columns of text (8 of them is written in roundels) with 28, 30, or 31 lines each, except for col. 8 which has 11 lines divided into two half-columns.

The text is written in Hebrew square Ashkenazi script with tagin in dark brown and brown ink on parchment membranes.

Several letters in the scroll are decorated with tiny swirls.

The ruling is almost invisible; only in a few places, its traces can be discerned.

The pricking on the membranes' edges can be seen; it is visible either on the side of the text and decorations or on the blank side of the parchments.

The third membrane is different from the two first membranes in the scroll; it is more suede and yellower than them and its quality influenced the text and decorations.

The fragments of the scroll are reproduced in some publications, but no comprehensive discussion on it is available.