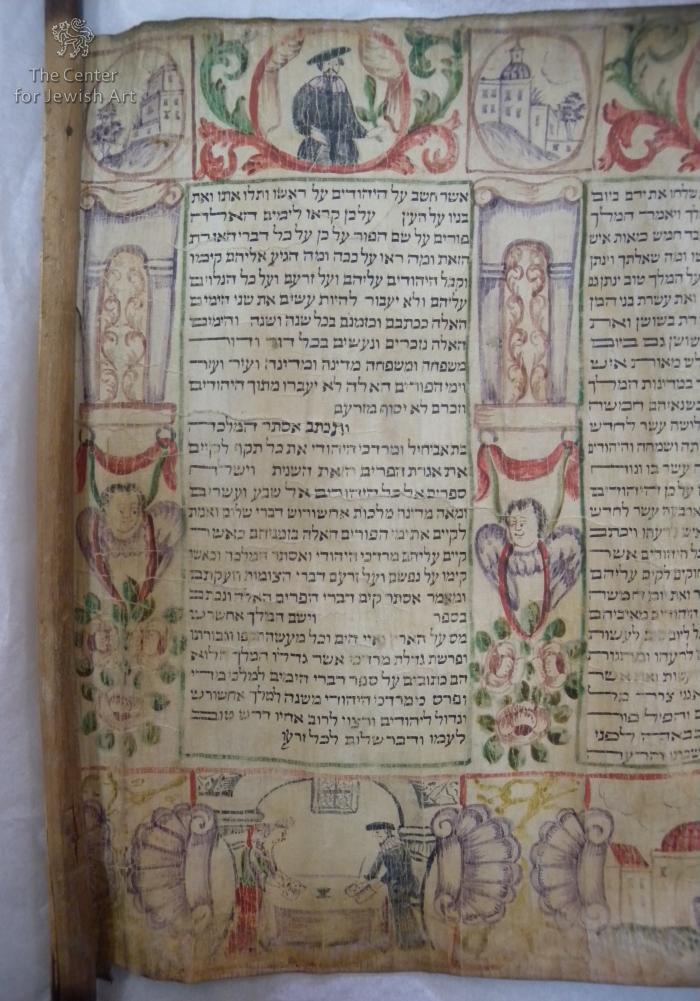 Text column no. 12 (sheet 3) surrounded by a decorative painted border. In the upper margin, the medallion with the bust of Mordecai is placed and in the lower margin, two people seated at the table are depicted; they are Esther and Mordecai writing the Purim letter (Es. 9:29).

The text is inscribed in the Hebrew Ashkenazi square script in light black ink, on the flesh side of parchment sheets that are rather thin. The flesh side is more smooth and brighter than the blank side that is rather suede and darker, however, the color of the sheets is not the same.

The opening word of the Megillah (ויהי) is written in enlarged and bolded letters, framed in an oval flanked by stylized acanthus leaves.

The letter ע in the final word of the book is highlighted by an elongated left arm and the lower component of the letter is decorated with a long stroke that is bent to the right.

In general, the ruling is almost invisible on both sides of parchment sheets. The lines made with a stylus can be discerned on blank parts of the 11th text panel and in the decorations between the text panels. This shows that both lines - upper and lower - were made along with the sheets.

There are hardly any margins in the text panels.

In institutional and private collections several similar examples are held; in the Index see ID 37731.

For a short English description of similar scrolls see: Sotheby's