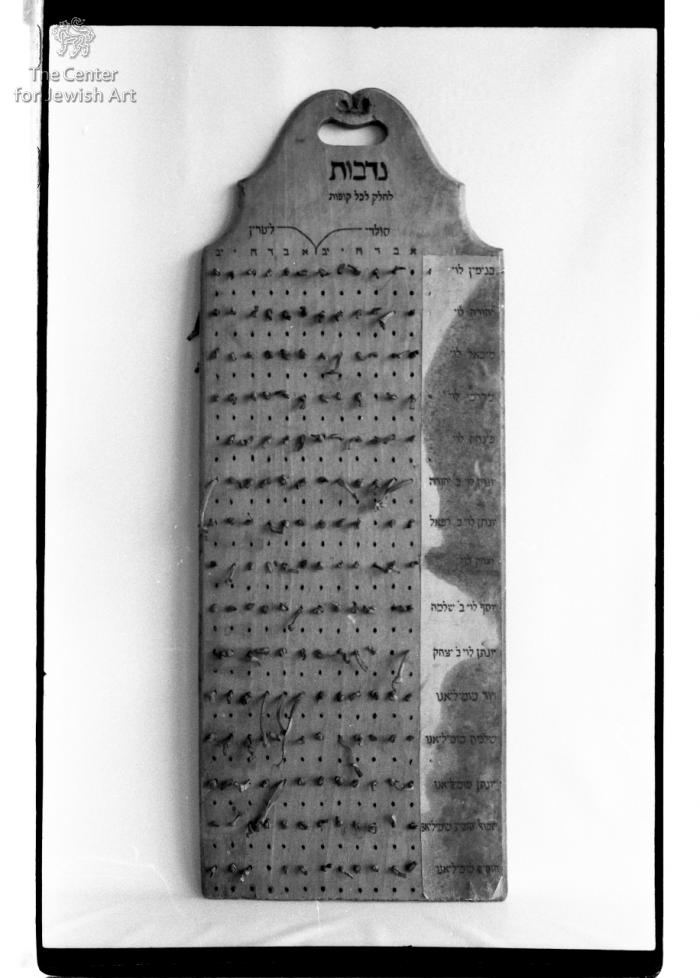 © Center for Jewish Art, Photographer: Radovan, Zev, 2000
Name/Title
Luah Menadvim Le-Zedakah (A Plaque for Alms Donation) | Unknown
Object
System for registering aliyot to the Torah
Object Detail
Settings
Unknown
Date
17??
Synagogue active dates
Reconstruction dates
Artist/ Maker
Unknown (Unknown)
Origin
Italy | Piedmont | Mondovi
|
Historical Origin
Unknown
Community type
Italian | Piedmont | Mondovi
|
Congregation
Italy | Piedmont | Mondovi
Location
Unknown |
Site
Unknown
School/Style
Unknown|
Period
Savoy Royalty (1416-1861)
Period Detail
Collection
Italy | Sc_530
| 26
Documentation / Research project
Unknown
Category
Sacred and Ritual Objects
Material/Technique
Material Stucture
Material Decoration
Material Bonding
Material Inscription
Material Additions
Material Cloth
Material Lining
Tesserae Arrangement
Density
Colors
Construction material
Measurements
Height
Length
Width
Depth
Circumference
Thickness
Diameter
Weight
Axis
Panel Measurements
Subject
Unknown |
Condition
Extant
Documented by CJA
Surveyed by CJA
Present Usage
Present Usage Details
Condition of Building Fabric
Architectural Significance type
Historical significance: Event/Period
Historical significance: Collective Memory/Folklore
Historical significance: Person
Architectural Significance: Style
Architectural Significance: Artistic Decoration
Urban significance
Significance Rating
Languages of inscription
Unknown
Type of grave
Unknown
0
Coordinates: 0.000000, 0.000000
Ornamentation
Custom
In most Jewish communities around the world, it is customary that a man who is called up to the Torah in a synagogue, pays an amount of money to the synagogue for the honour. This custom can be problematic since on Sabbaths and festivals it is prohibited to deal with or even to mention money.
This was the reason for the development of plaques such as the one described below. This plaque was used for registering the "sale" of Torah readings and other donations on Sabbaths and festivals – to avoid directly speaking of monetary matters. The plaque allowed the sum of money which was to be paid on a weekday by the members of the community accorded an honour, to be marked in a clever way: A list of the community members was set beside a vertical row of holes with attached threads, inscribed with a sum of money. During the "sale" of the Torah readings, the threads were then drawn out in order to mark the specific sum donated, corresponding to the name of the donor.
It is still unknown when the communities in Piedmont started this custom. The earliest plaque documented dates back to 1703, and is inscribed with names of members who prayed in the Mondovi synagogue (Sc.530-25). Apart from representing the custom, these plaques provide a valuable genealogical list of the families, who lived in Piedmont from the early eighteenth century. arranged according to the synagogues Moreover, a comparison of lists from different periods reveals the development or the decline of a specific synagogue, as for example the two plaques of Asti, point to the diminishing number of its members who read the Torah during the service in the nineteenth century (Sc.528-39).