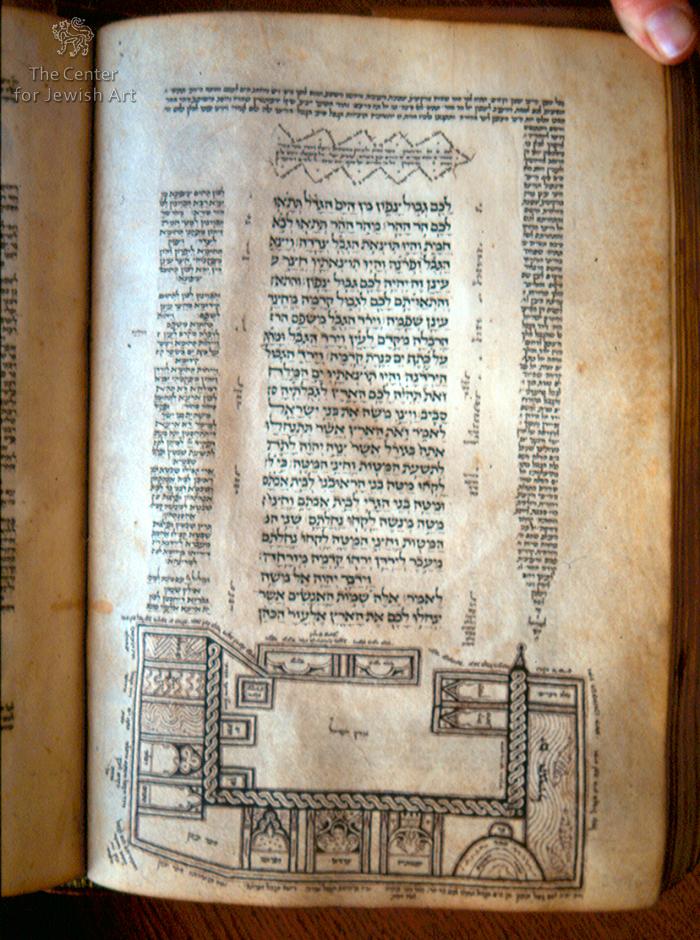 The biblical text in the centre of the page is surrounded by the Massorah magna and parva and by the Targum in the inner margin and on the upper and outer margins by Rashi's commentary, both written in shaped text. The top Massorah is also surrounded by a zig-zag line ending in the triangle facing to the right.

Set at the lower part of the page is a rectangular map drawn in dark brown ink on the parchment ground, illustrating the text of Num. 34:2-12 and the Rashi's commentary on these verses, discussing the boundaries of theLandofIsraeland the countries surrounding it, from the South through the West and East till the North.

Along the outer borders of the map on all sides are inscriptions in the semi-cursive script from the biblical text, relating to the specific locations depicted in the map. The diagram is oriented to the West, needs to be read upside down as can be deduced from the two directions inscribed on the map: "Air line on the Westside" (חוט מצר מערבי) on the right side of the map, and "Air line on the East side" (חוט מצר מזרחי) inscribed on the left side of the map.

The Western border on the right side of the map is made up of two rectangular compartments set within the main center space designated to the Land of Israel, each decorated within by an arch topped by a gable and two small circles and inscribed from right to left Azmon (עצמון), Kadesh-barnea (קדש ברנע). The border continues under the guilloche band with a small, narrow rectangular compartment inscribed "unto the river of Egypt" (נחלה מצרים) and to its left a large rectangular compartment inscribed in large square script "GreatSea" (ים הגדול). the great sea, indicating the border of the Mediterranean Sea is decorated by wavy lines symbolizing a body of water and three fish swimming in the water.

The Northern border, depicted on the bottom of the diagram, is made up of five compartments. The first one contains a depiction of a small mountain above a larger mountain, inscribed on the top section "Mount Hor" (הר ההר) and below Turi Amnom (טורי אמנום), which Rashi brings as the Yerushalmi's translations for Mt. Hor (Rashi's commentary on the Babylonian Talmud, Tractate Gittin, 8a). The visual depiction of Mount Hor follows the description in Rashi's commentary on Numbers 20: 22, based on other sources[1], describing the Mountain of Hor as a "mountain on top of a mountain, like a small heap above a large heap" (הר על גבי הר כתפוח קטן על גבי תפוח גדול). The next three compartments are equal in size, each divided into a bottom section with an inscription and an upper section which contains a decoration. Each of these compartments are framed by two thin towers and decorated within by foliate scroll motifs and small circles. The first is inscribed "Antiochia" (אנטוכיא) and is decorated by a turret above an arch; the second is inscribed Zedad (צדדה) and the third is inscribed Ziphron (זפרון). To the left of these is a corner compartment with the inscription Hazar-enan (חצר עינן) written diagonally inside it.

The Eastern border is divided into 5 equal compartments. The first compartment is Sepham (שפמה) and decorated by a trefoil arch and the second is inscribed Riblah (רבלה) and decorated by an arch with a large rosette above it. The next three compartments illustrate bodies of water – the first one, inscribed "the side of the sea of Chinnereth eastward" (כתף ים כנרת/ קדמה) is decorated with wavy lines, the second, inscribed twice with "the Jordan" (הירדן) is decorated by double smaller wavy lines, and the "the Dead Sea" (ים המלח) is decorated by zig-zag lines. Above these are two smaller compartments, set in the center designated as the Land of Israel. The one on the right is inscribed Ayin (עין), the one in the middle "the sea of Cinnereth". The borderline which turns into the Southern border is diagonal and above it, in the center space designated as the Land of Israel is a small square compartment set in the right and inscribed "Ascent of Akrabbim" (מעלה עקרבים).

The Southern border (on the top), is made up of two rectangle compartments, each decorated within by a trefoil arch and two small circles, inscribed (from right to left): Zin (צנה), Hazar-addar (חצר אדר).