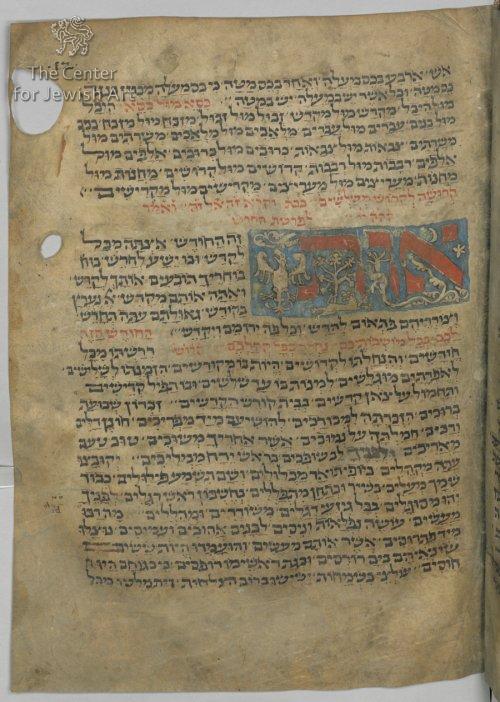 א 2051) of the morning service for Shabbat Hahodesh, which is read after the weekly pericope of the Torah at the fourth Special Sabbath of the month Adar after Purim, referring to the benediction of the month Nisan, is coloured in red and enclosed within an unframed blue panel. The panel is decorated in the right-hand corner with a moon and star illustrating the text of the piyyut. Other motifs are a heraldic eagle, a running dog and a dragon with acanthus scroll tail and other floral motifs in spared-ground technique. The letters are in red on a blue ground.

In the lower margin of fol. 11v a later hand partly copied the eagle of this panel.

The yozer for the pericope Hahodesh is illuminated by a moon and star or by a sun and moon in many Ashkenazi mahzorim from the 13th-14th centuries (Shalev-Eyni 2001, pp. 70, 88-89). Similarly to our Mahzor the moon and star appear in the Worms Mahzor (fig. 1).

For similar decoration by Illuminator A, see fol. 263.