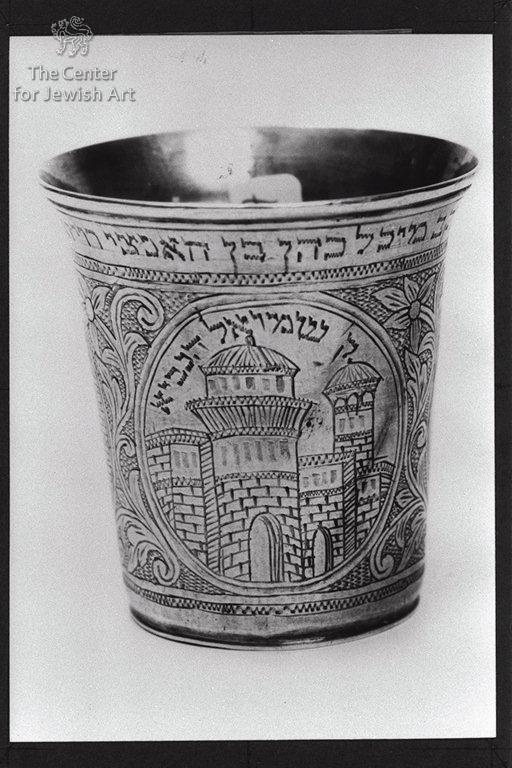 The sanctification of the Shabbat and Holidays is connected with a blessing recited over wine or grape juice. While the wine can be drunck from any vessel, often special cups are created for the purpose. In most cases, regular cups are simply decorated or inscribed with names or blessings, rendering them exclusively for the Kiddush.

This so-called "Zfat Cup" is a well known and popular item of Judaica. Most of these cups were brought without decoration from Europe, as indicated by the silver hallmarks, and were engraved in Eretz Israel with vignettes of Holy sites. The common knowledge is that such cups were fashioned the the city of Safed and hence their common name. The earliest dated cup is from 1881, so it is probable that they were made in the last quarter of the 19th century and the first quarter of the 20th. A number of existing examples have personal dedications, but it seems that they were purchased as souvenirs of the Holy Land as well.

Most of these cups, of the later types, carry an almost identical design, while earlier examples showed more original variation. This object is of the later type of quite standard form. The Holy sites depicted here are the Kotel, the Holy city of Safed and Mount Zion in Jerusalem. What makes it an unusual piece, however, are the miniature size, of which few examples are known, and the personalized dedication around the upper rim.

Inscription: Am eternal gift from Ya'akov Michal Cohen, the son of Chantzi Roise, in the Holy City of Safed, may it be built and established.