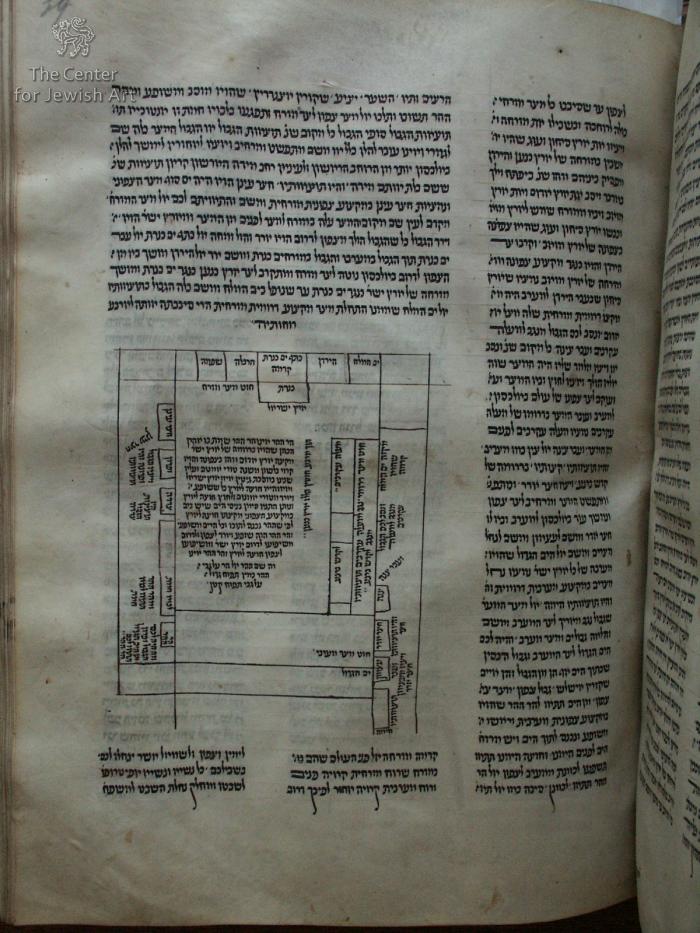 Set in the middle of the second text column is a large rectangular schematic map, executed by scribe B, illustrating the Rashi commentary for the text of Numbers 34:2-12 dealing with the boundaries of the Land of Israel from the South, through the West and East till the North.  The map is oriented to the East, according to Rashi 34:11 and includes inscriptions of excerpts from the text of the Bible as well as from the text of Rashi's commentary.

In the centre of the rectangle is inscribed on top "the Land of Israel" (ארץ ישראל) and on the right side inscribed vertically "within these four sides is the Land of Canaan" (תוך ארבע חוטין הללו ארץ כנען).  The centre of the rectangle includes a paragraph of text similar to Rashi's commentary on Gittin 8a (though it is not an exact copy of it), discussing the identification and location of the mountain of Hor.

Surrounding the centre on each sides are strips divided into varying numbers of compartments of varying sizes, inscribed with names of places mentioned in the text.

The southern border (on the right), is a strip which is open at the bottom, contains excerpts from the text of Numbers 34:3-5, sometimes comprised together in a slightly different manner than that of the biblical text.  The inscriptions read (from right to left): "the outmost coast of the salt sea eastward" (מקוה ים המלח/ שהוא/ קדמה), "And your border shall turn from the south to the ascent of Akrabbim" (ונסב לכם הגבול/מנגב למעלה/ עקרבים).  To the left of this is an inscription written diagonally reading "and pass on to Zin" (ועבר צנה).  To the left of this are four small compartments inscribed with names of places mentioned in the biblical text and set above inscriptions of excerpts from the biblical text.  (From right to left): The first compartment is inscribed "Zin" (צנה), the second "Hazar-addar" (חצר אדר), and below it "and the going forth thereof Hazar" (והיו תוצאותיו/ חצר), the third "Azmon" (עצמון) and below it "and pass and shall go on from Azmon, Hazar-addar" (ועבר/ ויצא מעצמון/ חצר אדר) (the biblical text actually reads the opposite of this inscription, since it directs that the border should go on to Hazar-addar and then pass on to Azmon [Numbers, 43:4]).  The fourth compartment, set on the far left side of this strip is empty and is inscribed underneath "and the goings out of it" (תוצאותיו) and on the right "shall be the sea" (הימה).

Above the middle part of this right hand strip is a smaller strip which protrudes into the centre section designated as the Land of Israel.  This smaller strip is inscribed with an excerpt from Numbers 34:4, reading "south side – the south to the ascent of Akrabbim and the going forth thereof shall be from the south to Kadesh-barnea" (חוט מצר דרומי-נגב למעלה עקרבים תוצאותיו/מנגב לקדש ברנע).  Above this is another strip with two compartments inscribed (from right to left): "ascent of Akrabbim" (מעלה עקרבים), "to Kadesh-barnea" (לקדש ברנע).  These relate to Rashi's commentary to Numbers 34:4, although according to Rashi, this inner strip is supposed to reach until the section parallel to "Azmon" (עצמון), and in our map the strip only reaches until "Zin" (צנה).

The northern border, set on the left, is a strip in which are five small compartments, each containing the names of places mentioned in the biblical text.  These compartments are each set above an inscription of excerpts from Numbers 34:7-9, sometimes comprised in a manner slightly different than that of the biblical text.  The far right compartment is inscribed "the mount Hor" (הר ההר) and underneath "and this shall be your border Ziphron, from the great sea ye shall point out for you the mount Hor" (וזה היה לכם/ הגבול זפרון/ מן הים הגדול תתאו לכם הר ההר).  (It seems the scribe made a mistake in copying the excerpt taken from verse 7 and instead of the word "north" (צפון) he copied the name "Ziphron" (זפרון), appearing in verse 9.  This mistake may already have appeared in his model, or the scribe may have mixed them up because the two words have a similar pronunciation.)  The next compartment is a long one, inscribed "the entrance of Hamath" (לבוא חמת) and underneath "From mount Hor ye shall point out your border unto the entrance of Hamath" (ומהר ההר תתאו לבוא חמת).  To the left of this is a compartment inscribed "Zedad" (צדדה) and underneath "and the going forth of the border shall be to Zedad" (היו/תוצאות/הגבול/צדדה).  To the left is a compartment inscribed "Ziphron" (זפרון) and underneath "and the border shall go on to Ziphron, and the goings out of it shall be at" ((ויצא הגבול/ זפרונה והיו/ תוצאותיו.   Between this and the final compartment is the continuation of the previous inscription which is set diagonally reading "Hazar-enan" (חצר עינן), leading up to the next compartment which is also inscribed "Hazar-enan" (חצר עינן).

The eastern border, set on the top, is inscribed below "east side" (חוט מצר מזרח) and contains five compartments inscribed with names of places mentioned in the biblical text of Numbers 34:10-12 reading (from left to right): "Sepham" (שפמה), "Riblah" (הרבלה), "the side of the sea of Chinnereth eastward" (כתף ים כנרת/ קדמה), "the Jordan" (הירדן), "the salt sea" (ים המלח).