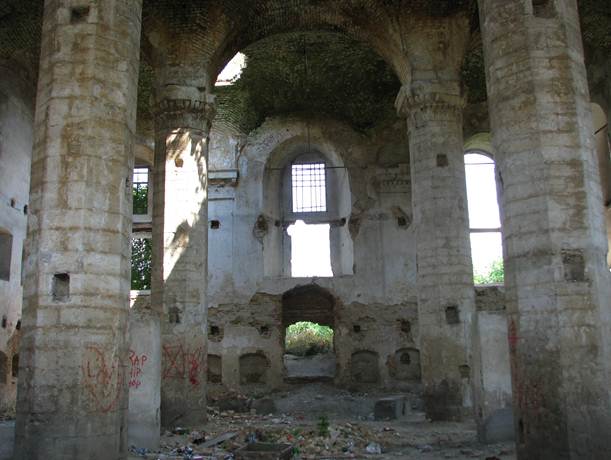 
The Center for Jewish Art Uploads its Archives onto the Internet

A long standing dream of the Center to digitize its archives and upload them onto the internet has come true. Within the framework of TAMAR project (preservation of National assets) the archives of the CJA were recently recognised by the Israeli Government as a "Non-Tangible National Heritage", worthy of being publicised through digitization into the National Library's website.
Currently the Center is engaged, in cooperation with the National Library of Israel (NLI), with a pilot project digitizing 12,000 slides and uploading them onto the National Library's website. The pilot project is now near completion. In the last six months Zoya Arshavsky, Gilad Hemed, Ariella Amar and Ivan Ceresnjes prepared all the slides for digitization and provided metadata in digital form. Currently, two thirds of the slides have been already scanned and the database is being prepared by the NLI computerization team.
This fruitful cooperation with the Library will now be continued. In January 2013 the Center and the Library will embark on a large project, due to run for 3 years, which will include all the material amassed by the Center for over 30 years. Having the archives accessible on the internet will open wide vistas of knowledge about Jewish visual heritage, thus conjuring the culture of lost communities and commemorating the way they lived. This will also promote research and learning while providing a visual dimension to the narrative of Jewish history and our perception of Jewish life before and during the Holocaust, hitherto built mainly on handed-down texts.

However, while the government allocated funds for partial support of the digitization and publication of the Center’s archives on the web, the Center is still in need for matching funds to pay salaries to its experts for providing and processing the textual data.
We will welcome and be grateful for any contribution that might help this significant enterprise come true.

The Center for Jewish Art Publishes its Documentation and Research

The crowning point of the Center's activities was the publication of a two-volume catalogue of Synagogues in Lithuania in cooperation with the Vilnius Academy of Art and the Centre for Studies of the Culture and History of East European Jews in Vilnius, Lithuania. The catalogue is a comprehensive overview of 96 extant synagogues in 59 cities and towns, among them 17 synagogues built of wood. This is c. 9% of synagogues existing in Lithuania before the Holocaust. The catalogue provides documentation, photographs and architectonic plans of the buildings interlaced with historical in-depth research of the lost communities and their built heritage. The destruction of synagogues in Lithuania continues: during the time that passed from the documentation of the buildings to the publication of the catalogue, three former synagogues were demolished and the unique wooden synagogue in Pakruojis was damaged by fire.
The catalogue was edited by Aliza Cohen-Mushlin, Sergey Kravtsov, Vladimir Levin, Giedrė Mickūnaite and Jurgita Šiauciūnaitė-Verbickienė.

Two more catalogues of synagogues and one catalogue of Hebrew illuminated manuscripts are in the process of preparation:
1) A comprehensive catalogue comprising 37 extant synagogues in 26 towns in Latvia is now being written in cooperation with the Jewish Museum in Riga.  The field research and documentation for this catalogue were carried out by Center’s researchers Dr. Sergey Kravtsov and Arch. Zoya Arshavsky in 2007–2009 with the support of the Dutch Jewish Humanitarian Fund. Like in Lithuania, only c. 11% of the pre-World War II synagogues in Latvia is preserved. By now one of the wooden synagogues documented in 2009, has already been demolished. As with the Lithuanian catalogue, the Latvian one will follow the same format of a comprehensive overview of the extant and extinct synagogues, accompanied by scientific research and articles of their architectonic history and that of the communities in which they were conceived .  The authors of the catalogue are Sergey Kravtsov, Ilya Lensky and Vladimir Levin.

The Green Synagogue in Rezekne, Latvia. Photo 2007 by Sergey Kravtsov

2) A catalogue of 36 extant synagogues in 21 towns in the historical region of Volhynia (Ukraine).  This number constitutes only 4% of the synagogues existing in this region before the Holocaust.  Like in Lithuania and Latvia, the state of preservation of some synagogues, a very important factor from the historical and architectural point of view, is deplorable - some of them are about to collapse in the near future, as evidenced by the photograph of the Great Synagogue Ostroh (see title page).
This project is supported by the Machover Trust and is due to be finished in December 2012.  The authors of the catalogue are Sergey Kravtsov and Vladimir Levin.

3) A catalogue of the collection of Hebrew illuminated manuscripts at the Bayerische Staatsbibliothek in Munich includes 85 items. Among them the earliest dated Ashkenazi manuscript in the world (the Rashi commentary copied in 1233) and three manuscripts in Yiddish, including a translation of the Bible, a collection of German-Jewish folktales and a 15th-century book on war machines, written by a Jew in four languages: Yiddish, Hebrew, German and Latin.  The documentation of the manuscripts was supported by the Fritz Thyssen Foundation.  This catalogue, to appear on the website of the Bavarian State Library is now in its final stages of editing.  The project is headed by Prof. Aliza Cohen-Mushlin and carried out by the Center’s researchers Ilona Steimann, Michal Sternthal and Yaffa Levi.

Prof. Ziva Amishai-Maisels, our colleague and the world renowned specialist on Chagall, was asked by Sotheby's to prepare an article on the little-known works by the artist, depicting synagogue interiors. Only six such finished oils are currently known, three of which were sold this year by Sothby's. One of these paintings, Synagogue in Vilna, the "Kloyz" of the Vilna Gaon, carries Chagall's signature. In search for authentication Prof. Maisels approached our Senior Researcher Dr. Sergey Kravtsov in order to verify whether the depicted interior of the synagogue corresponded to the historical building. Thanks to his and Dr. Vladimir Levin’s research for the catalogue of synagogues in Lithuania, they were able to compare Chagall's work with rare historical photographs.  Although they based their conclusions on black and white photos only, they could confirm the authenticity of the depiction which Chagall faithfully rendered, down to the smallest details of the interior, including even the colour of the window glazes.  Subsequently the second volume of Synagogues in Lithuania was enriched by the only existing colour depiction of the Gaon's Kloyz, which is also the only one showing it's Torah ark. With this clear authentication at hand Sotheby's were able to sell the painting for $ 758,500 – a quarter of a million dollars more than the estimated price.


A year has passed and the Holiday season is again on our threshold. As always we would like to wish you a healthy, happy and peaceful New Year and to share with you some information about our ongoing activities and plans for the future.  In spite of the long-lasting financial world crisis, which obviously also affected us at the Center, we continue to focus our efforts on the rescue of the Jewish artistic heritage.
In May 2011, Dr. Sergey Kravtsov travelled to historical Volhynian cities in Ukraine to carry out a field survey of extant synagogues, within the framework of our Synagogues of Volhynia project.  His aim was to verify previously collected information, take new photographs, and record recent changes made to these structures. Dr. Kravtsov made a number of excursions to 23 towns and cities in today’s Khmel’nytsky, Rivne, Ternopil’, Volyn and Zhytomyr oblasts (regions) of north-western Ukraine, covering about 3,500 km.  Dr. Kravtsov has collected field material on scores of Jewish sites, including synagogues, mausoleums (ohalim) of Hasidic tzadikim, cemeteries, ritual bathhouses (mikvaot) and other communal structures. The collected data will serve as a solid basis for the planned research and the forthcoming Catalogue of Synagogues in Volhynia.
Within the framework of the same project, Dr. Vladimir Levin travelled to the region in June to research archival materials. Dr. Levin visited historical archives in Zhytomyr, Rivne and Lutsk, checked hundreds of files and found archival information on 123 previously unknown synagogues in the region, most of which were destroyed during and after WWII. He also discovered the previously unknown preserved Herzberg’s Synagogue in Rivne, which stands in the centre of bazaar stalls, as it did hundred and fifty years ago. 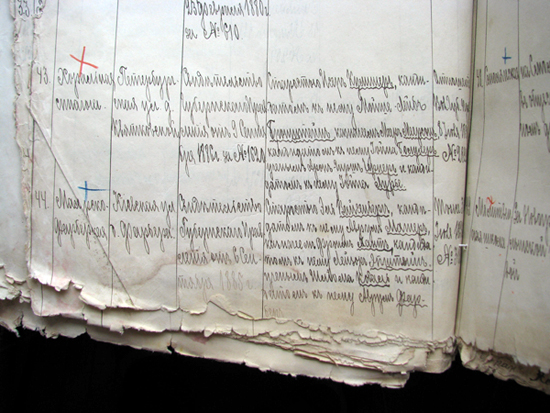 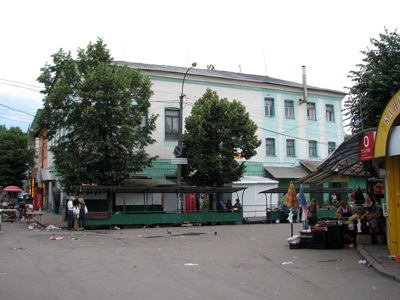 
Besides archival works, Dr. Levin visited and documented two synagogues in Zhytomyr, once a thriving Jewish centre, and two synagogues in Polonne, where the author of the first Hasidic book, Rabbi Yaakov Yosef of Polonnoe, lived. He also took additional photographs of the synagogues in Ostroh, Izyaslav, Shepetivka and Radyvyliv. 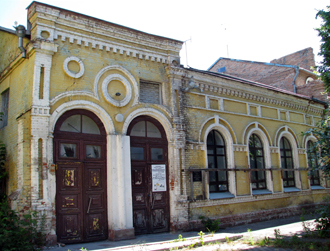 
Once the project is completed all the material amassed by the Center for over 30 years will become a universally accessible database – to be used by students and researchers of Jewish culture as well as the wide public interested in Jewish cultural heritage.  The project is carried out in collaboration with the National Library of Israel and is planned to span over a few years.
However, while the help by various donors provided the means and momentum to start the project, we are still in great need for further funds to cover the cost of necessary equipment as specified bellow.

Activities based on Research Carried out at the Center 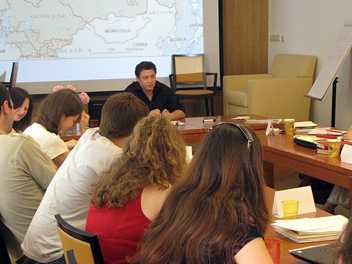 Dr. Levin is teaching his course at the summer school
on Jewish History and Culture of East-Central Europe in Lviv 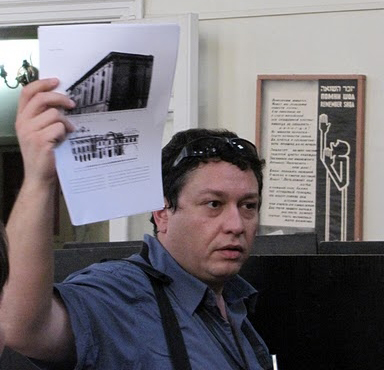 Dr. Levin is presenting Dr. Kravtsov's research paper at the summer school
on Jewish History and Culture of East-Central Europe in Lviv