The marble monument is located near a corner of a public park, in the center of a built-up urban neighborhood. It is set beneath a tall pine tree and rests on a rectangular concrete base set into the unpaved ground, The monument is marble left rough as quarried on the rear and edges, and smoothed and polished on the front, where there is a low relief carving of an olive branch, an open book, and strands of barbed wire, and a short, inscribed passage from Anne Frank’s diary.

Metal street signs identify the space as Plateia Annas Frank (Anne Frank Square). A fountain is located on the corner of the square not far from the monument. Unfortunately, a large brightly-colored kiosk and movable garbage bins are also located in close proximity to the monument. 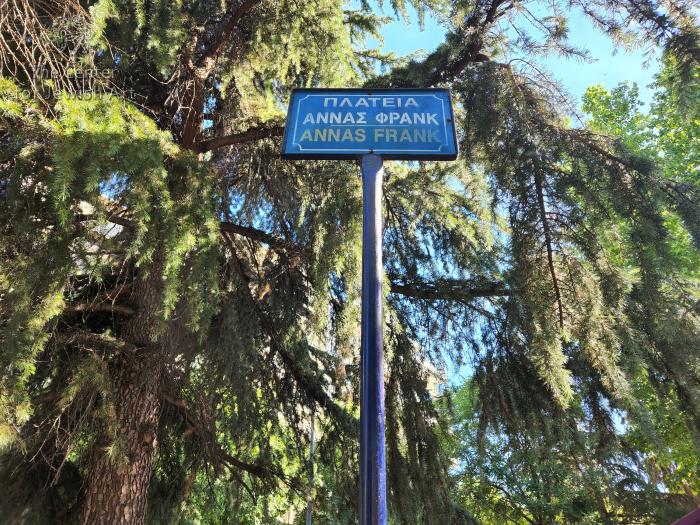 The Municipality of Larissa dedicated a square near the general hospital in memory of the Holocaust and named “Anne Frank Square”. In cooperation with the Secretariat of the Region of Thessaly, a commemorative marker sculpted by Kostas Ntais was installed in memory of Anne Frank and by association, the 1.500.000 children killed in the Holocaust (the murdered children were mentioned at the dedication but not on the monument itself). Across one corner of the square is situated an impressive house that was appropriated as the home of the Nazi commander of the town during the German occupation.

The unveiling of the column took place on October 31, 1999, with the Ambassadors of Israel and the Netherlands present, together with the President of the Central Board of Jewish Communities of Greece (KIS), local authorities, and many others. Before the dedication, there was an event at Larissa’s Municipal Conservatory where the main speaker was local author Vaggelis Kolonas, who was the instigator of naming the square, In the foyer of the Conservatory, a photo exhibition about Anne Frank was organized in cooperation with the Embassy of Netherlands.