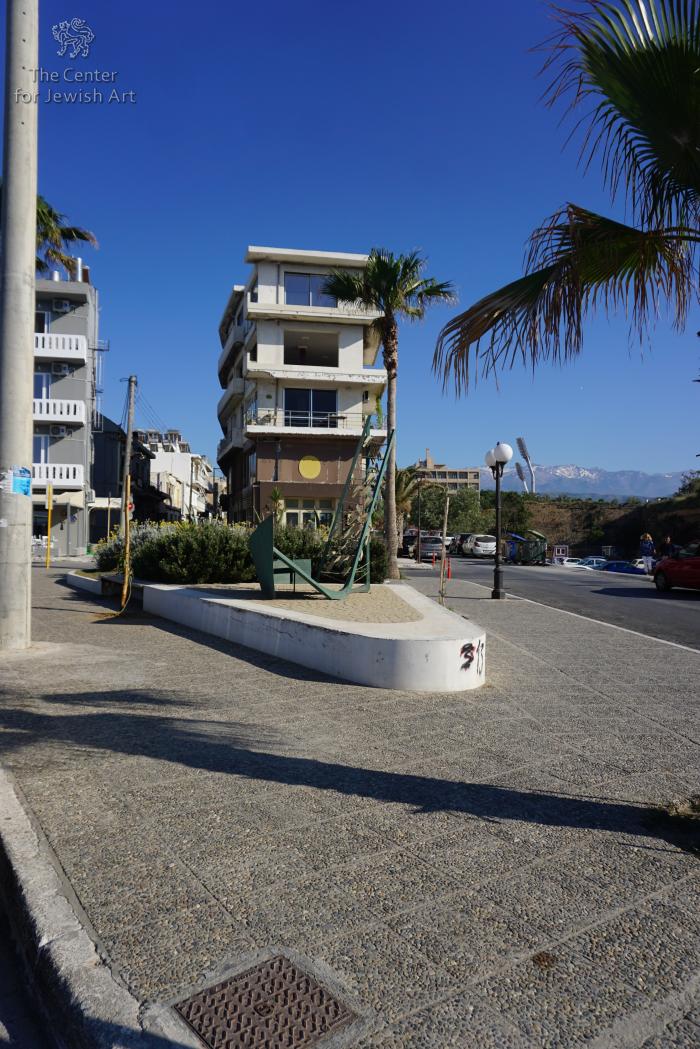 Victims of the sinking of the Tánaïs transport ship

The monument is located just outside the eastern walls of the old town of Chania in the Koum Kapi neighborhood, at a fork intersection of Kiprou and Akti Miaouli streets.  It consists of three parts. First, there is a large triangular concrete base with rounded corners that occupies a good part of the site at the fork of the two roads, one of which runs to the left along the edge of the sea front (east of the actual port), and the other runs along the line of the old town walls. The platform mimics the shape of the land plot, and the curved front reminds one of a ship’s prow. The front half is a platform that carries the sculptural monument. The rear part of this concrete base is wider and serves as a giant planter filled with greenery.

The second part is the sculptural monument itself, which from the waterside approximates the form of a sailing ship, but from other angles appears more abstract. From head-on, the metal parts look something like a giant anchor. Metal lattice work on the right side resembles ship's rigging, and on this is installed a flock of metal doves who seem to ascend upward (presumably these are the souls of the dead). The ship-specific form and symbolism in the monument only come out slowly. One sees the form of a hull, an anchor, and ship’s rigging.

The third part of the memorial, and perhaps the most important, is a pair of small bronze rectangular plaques with commemorative inscriptions. Unfortunately, these are nearly hidden behind the sculptural monument. They are set low on the base and far from the edges, and thus very hard to read. One is in Greek and the other in English. Given their small size and their location, they are hard to see, and nearly impossible to read in bright sunlight.

The plaques have identical inscriptions in Greek and English.

Of the Greek Jews of Crete
Men, women and children

Of the Christian members of the resistance

Of the Italian antifascist servicemen

The Municipality of Hania

The Central Board of Jewish
Communities in Greece

The Jewish community of Thessaloniki
during the presidency of David Saltiel

Municipality of Chania, The Central Board of Jewish Communities of Greece (KIS) The monument commemorates all those killed when the Greek-owned, but German-operated ship Tánaïs was sunk. Almost the entire Jewish community of Chania was on board, on the second leg of their deportation to Auschwitz-Birkenau. They were headed to death but found it sooner than even their German captors expected. Also killed with them were an unknown number of Cretan resistance fighters and Italian prisoners of war. The monument was dedicated in October 2013 to commemorate all the victims of the sinking.

The memorial monument was created under the aegis of The Central Board of Jewish Communities in Greece (KIS) and the Municipality of Chania and sponsored by the Jewish community of Thessaloniki during the presidency of David Saltiel and by Mr. Sabby Mionis. It was reported in Chania that Dona-Lilian (Lily) Kapon, whose family had moved from Chania to Athens in the 1930s, was a leading force behind the creation of the memorial.