A pyramid-shaped concrete monument is placed on a stepped base and bears a plaque inscribed in Russian. The inscription does not specify that the victims were Jewish.

The Russian inscription on the older monument reads:

Translation: Here are buried thousands of innocent victims who perished at the hands of Fascist occupiers, 1941-1944. 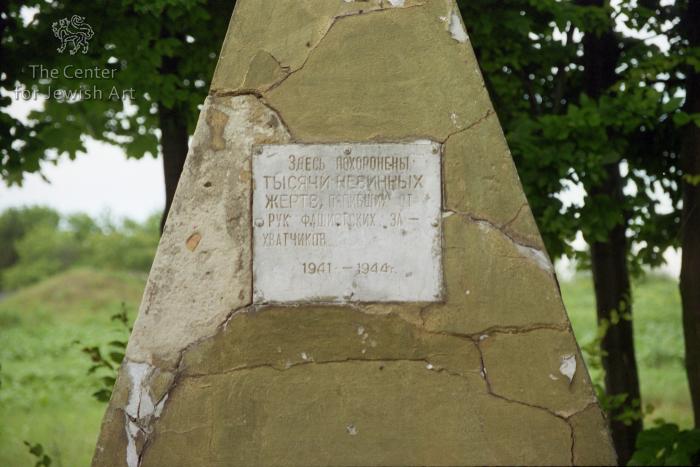 In the 1930s, there were around  7,000 Jews in Kremenets. With the beginning of World War II on September 1, 1939, the number of Jews increased since several thousand Jews from German-occupied Poland took refuge in Kremenets. After September 17, 1939, with the arrival of the Red Army in the city following the Ribbentrop-Molotov Pact, Kremenets became part of Soviet Ukraine. The Germans captured Kremenets on July 2 or 3, 1941. After the start of the German invasion, several hundred young Jews were able to flee to the Soviet Union.

The atrocities began in the first days of the German invasion with the pogrom and mass murders. On March 1, 1942, about 9,000 Jews were interned in a sealed ghetto. On August 10-11, the Kremenets ghetto was liquidated. Many of its inmates were shot to death, at the former WWI shooting range outside the town. The Jews of the nearby village of Berezce were also killed at the same murder site. Murders continued until October 1942.

"Murder Story of Krzemieniec Jews at the Yakutsk Regiment in Krzemieniec," Untold Stories - Murder Sites of Jews in Occupied Territories of the USSR (Yad Vashem project), https://collections.yadvashem.org/en/untold-stories/killing-site/14627503-Yakutsk-Regiment-in-Krzemieniec (accessed September 29, 2022)
Type
The following information on this monument will be completed:
Copy-editing
Language editing
Measurements
|