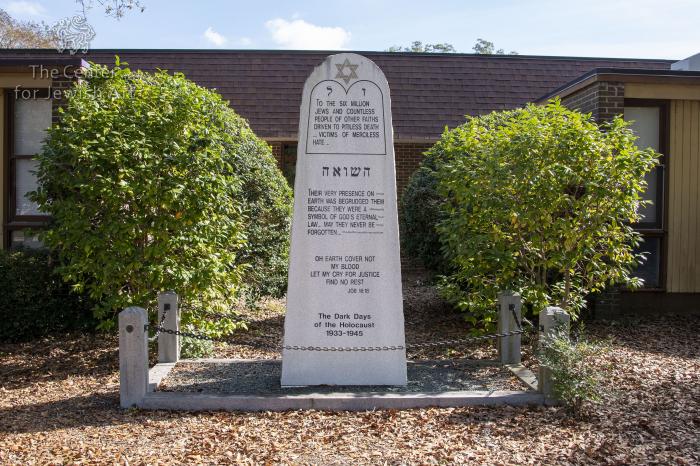 Matzevah-type monument with yellow-colored Magen David above outline of the Ten Commandments Tablet with text within. More text below and on the rear. The monument is surrounded by metal posts and chains that were added to the Memorial to represent the guard towers and the fences surrounding the extermination camps. The gray gravel spread at the base of the Memorial is intended to be a reminder of the ashes of Holocaust victims who were killed and cremated, “their ashes left to blow to the corners of the earth....shrubs were chosen because they are ever-green and because these varieties will have some blooms almost all year.”

The inscription inside the Tablet of Ten Commandments reads in Hebrew and English.

TO THE SIX MILLION
JEWS AND COUNTLESS
PEOPLE OF OTHER FAITHS
DRIVEN TO PITILESS DEATH
...VICTIMS OF MERCILESS
HATE...

The inscriptions under the Tablet of Ten Commandments are in Hebrew and English.

The central inscription is "justified" by barbed wire and alludes to the prayer in memory of Holocaust victims as formulated in the Reform prayer book "Gates of Repentance".

THEIR VERY PRESENCE ON
EARTH WAS BEGRUDGED THEM
BECAUSE THEY WERE A
SYMBOL OF GOD’S ETERNAL
LAW. MAY THEY NEVER BE
FORGOTTEN

The inscription on the back side reads:

DEDICATED APR. 30, 1989
TO THOSE WHO PERISHED
IN AUSCHWITZ...DACHAU...
BUCHENWALD...TREBLINKA
AND OTHER DEATH CAMPS