Children who perished in the Holocaust

The memorial consists of a stone monument and a small stone bench surrounded by three crepe myrtle trees. It sits on a small grass area between Grand Park and Savannah’s Playground in the Market Common. The monument consists of two parts. A large plinth is faced with inscribed stone slabs. A flat stone slab sits atop this and carries a carved marble monument on top. The sculpted piece represents a wall of irregular stones on which rests an enormous butterfly carved in high relief. Nearby is a stone bench, the bottom part of which is a single piece of granite that is also inscribed.

On the front of the monument plinth:

On the rear of the monument plinth:

THE HOLOCAUST
Between 1933 and 1945 Germany’s dictator
Adolph Hitler organized and enforced Nazi policies
that ended individual freedom of speech,
freedom of the press, freedom of assembly,
and the right to privacy,

By May 1945, Nazi Germany and its collaborators
had used systematic, bureaucratic, state-sponsored
persecution and genocide to annihilate
6,000,000 European Jews, among them
1,500,000 infants and children.
5,000,000 Christians, among them children.
and numerous people of all ages
they considered undesirable.
REMEMBER

Children in the Holocaust saw the butterfly
as a symbol of freedom
Permanent Butterfly Memorial Monument
dedicated May 1, 2016

The Permanent Butterfly Memorial Foundation as a gift to the city of Myrtle Beach. 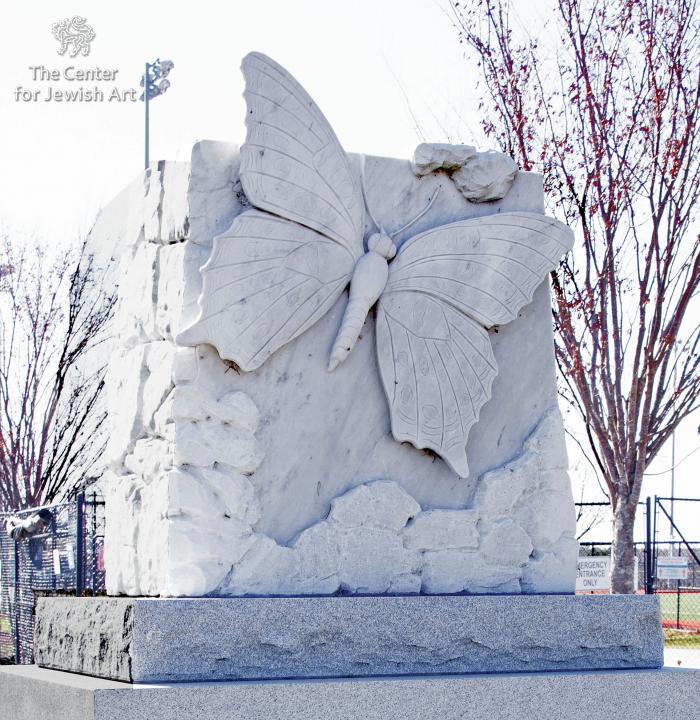 The Holocaust Butterfly Memorial Monument honors the 1.5 million children who perished in the Holocaust. The project began in 1998 when local Chabad Jewish Academy Social Studies teacher Ellie Schiller developed a project with her students to honor the child victims of the Holocaust inspired by the poem “I Never Saw Another Butterfly,” written by Pavel Friedmann, a young man deported to Terezin in 1942 and killed at Auschwitz in 1944. The goal was to collect 1.5 million paper butterflies in memory of each child. Hugo Schiller, Elie’s husband Hugo, himself a Holocaust survivor, encouraged the project.

Publicity about the project spread Though Schiller and her students began by receiving only a few butterflies a week from across the country, the numbers grew dramatically and in time, more than 1.5 million butterflies were collected from around the world. In 2014, a foundation was founded to honor the project with the primary purpose to create a permanent memorial to child victims. $32,000 was raised and the City of Myrtle Beach contributed the location and extra funding. The Butterfly Memorial Monument was created in a public park, next to the children's playground, and dedicated in 2016 and The City of Myrtle Beach accepted ownership of the monument.

Main Surveys & Excavations
Sources
Aaron, Arielle A. In The Presence of Butterflies: The Story of the Original Butterfly Project. (‎AuthorHouse Publishing, 2011)