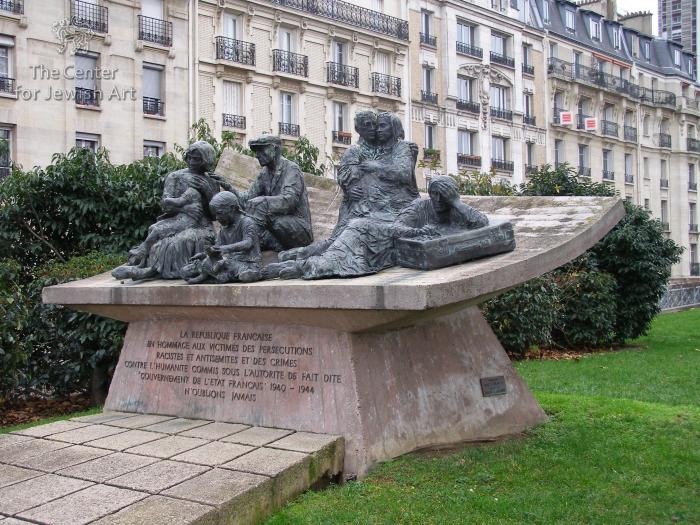 Jews who were rounded up in Paris on July 16-17, 1942, and imprisoned at the Velodrome d’HIV before deportation

A bronze sculpture represents a group of seven figures, variously kneeling and lying surrounded by their luggage and personal belongings. The bronze group is set on a wide curved concrete shell that serves as a base.

The monument is modest both in height and artistic ambitions, and derivative in its use of images and iconography of refugees. The composition recalls paintings of refugees of World war I and Russian pogroms by artists Maurycy Minkowski and others.

The Paris statue refers to all deportees but especially commemorates the victims of the Vel' d'Hiv. The figural sculptural group includes children and a pregnant woman and a sick man. The curved concrete shell on which the bronze group sits is meant to represent the curve of the velodrome track. In fact, deportees were in the stands and throughout the entire complex, but there is no contemporary visual documentation of the scene.

Translation: The French Republic, in homage to the victims of persecution / racist and anti-Semitic persecution and crimes / against humanity committed under the so-called de facto authority / French state government 1940-1944. Let us never forget. 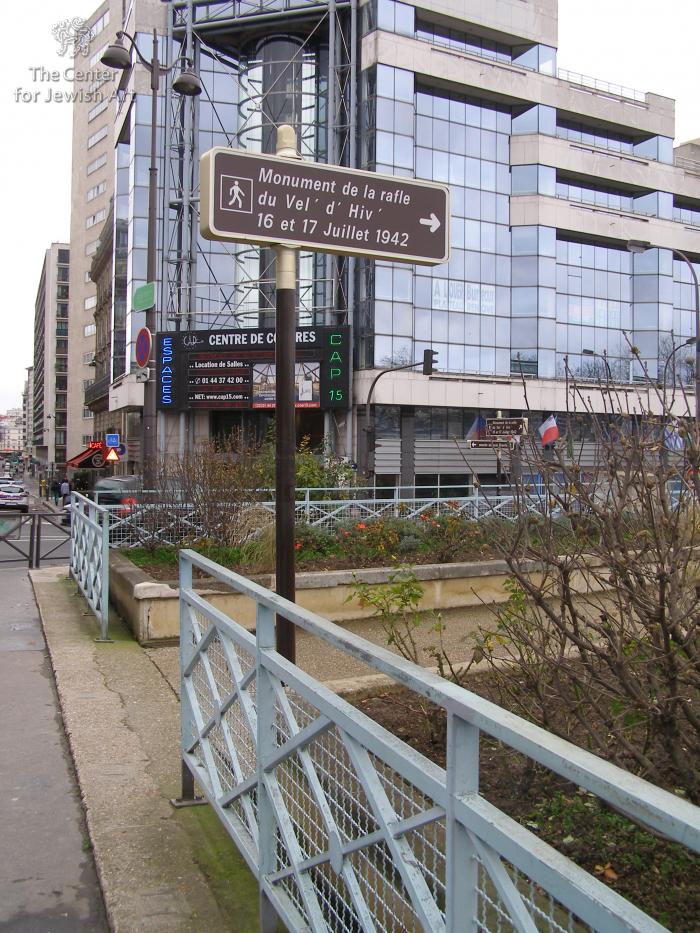 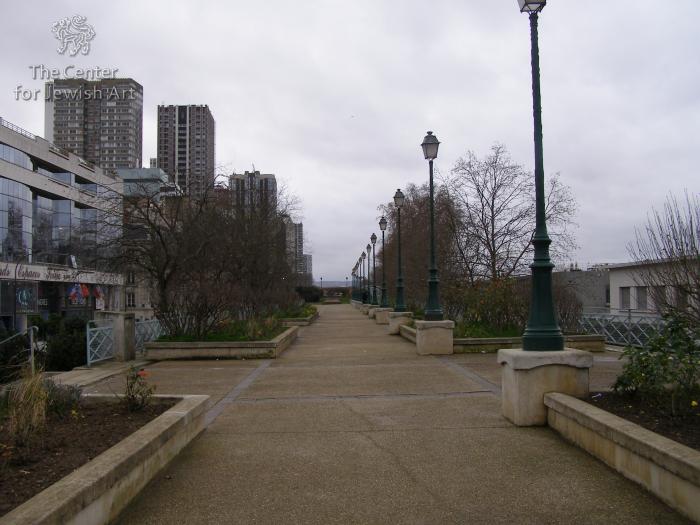 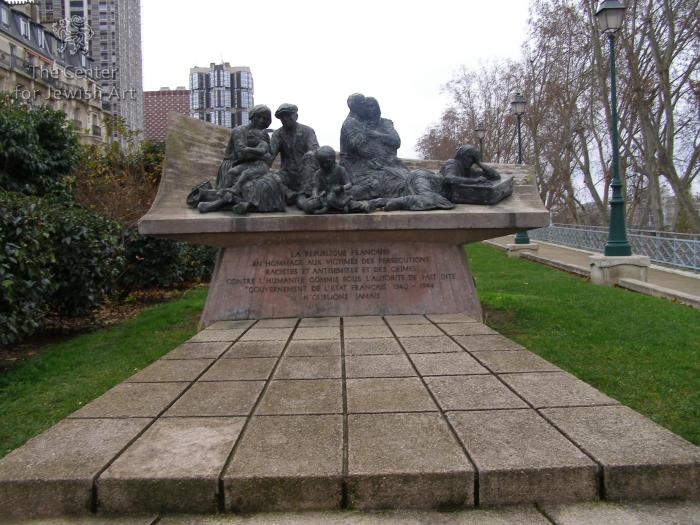 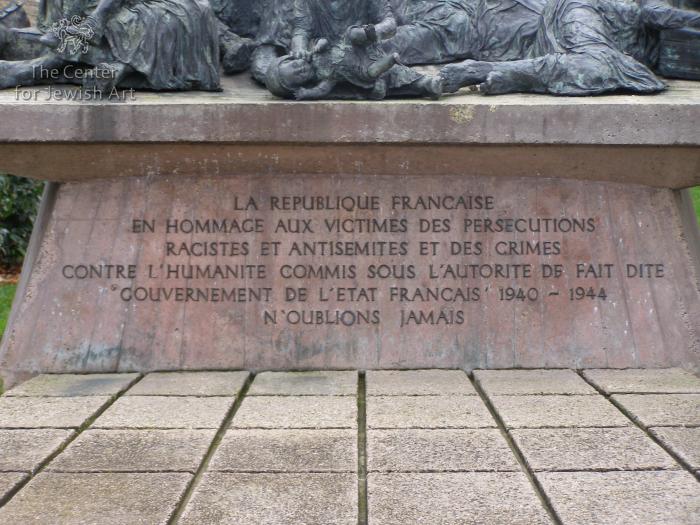 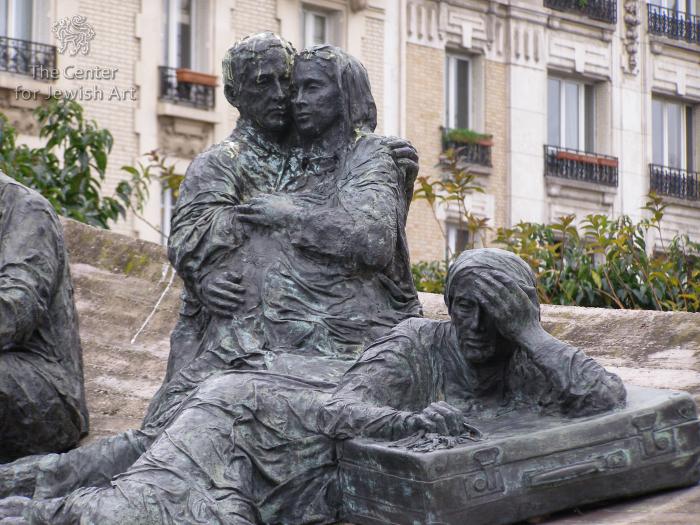 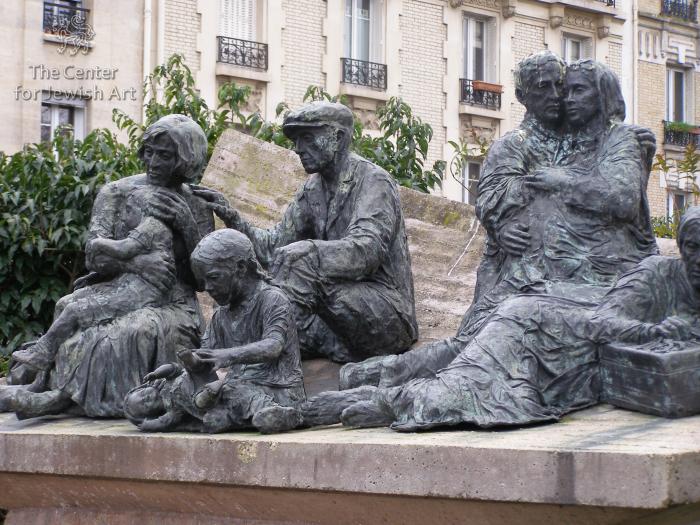 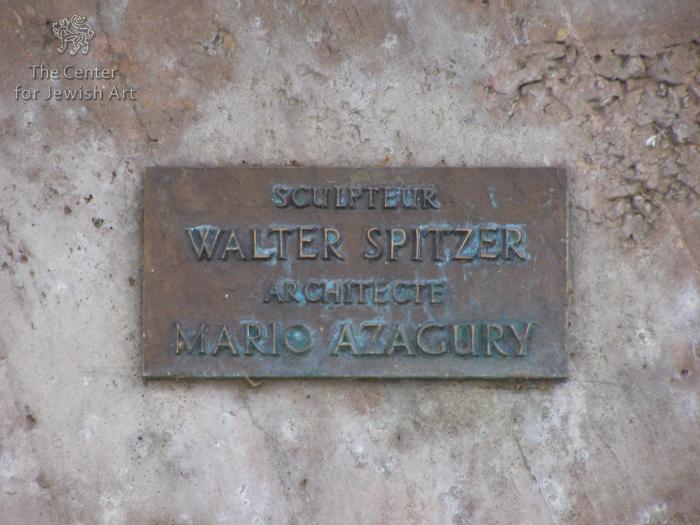 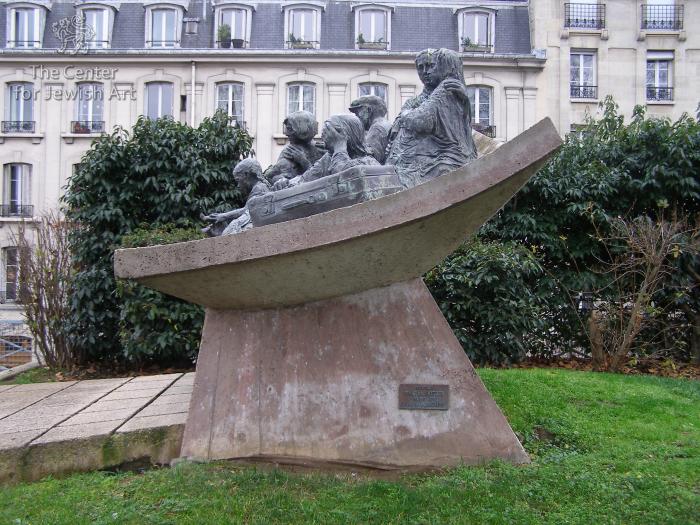 The monument commemorates the round-up of 14,000 Jews in Paris and their detainment in the Vélodrome d'Hiver, an indoor velodrome (cycle track) at the corner of the boulevard de Grenelle and the rue Nélaton in the 15th arrondissement of Paris, not far from the Eiffel Tower.  The deportees, many of whom were women and children, were held in the velodrome for several days before their deportation to transit camps, leading in turn to their removal to Auschwitz, and their deaths.

A national competition was held in 1993 “to find a new, more suitable memorial expression for the site.” On 3 February 1993, then-President François Mitterrand commissioned a monument to be erected on the edge of the quai de Grenelle, near where the Velodrome d'HIV stood.

Polish-born Holocaust survivor Walter Spitzer was engaged as the sculptor and Mario Azagury as the architect. The monument is on land given by the city of Paris and paid for by the Ministère des Anciens Combattants (Veterans Administration [Am], Old Soldiers [Br]) and is cared for by the Ministry of Defense.

The monument was dedicated on 17 July 1994, and since then a ceremony is held at the site every year.  At the ceremony in 1995 then-President Jacques Chirac, successor to Mitterrand, spoke about the guilt of the French police and gendarmerie who collaborated with the Germans in the deportation of the city’s Jewish inhabitants.

The deportation of Paris's Jews was one of many callous acts of French collaboration in Nazi aims, which have gradually received more attention in France and abroad. Émile Hennequin, director of the Paris police, ordered on July 12, 1942 that "the operations must be effected with the maximum speed, without pointless speaking and without comment."  Local police reports document that beginning at 4:00 a.m. on 16 July 1942, 13,152 Jews were arrested, of which 5,802 (44%) were women and 4,051 (31%) were children.  Some people were warned by the French Resistance or hidden and escaped being rounded up.  The arrested had to leave their homes quickly - they could take only a few items; blanket, sweater, shoes, and two shirts.  Conditions in the velodrome were horrendous, with little food and water, few toilets, and no other amenities. The deportation was remembered in Marcel Ophuls documentary The Sorrow and the Pity (1969) and more of an attempt to visually recreate the internment was made in the film Sarah's Key, released in 2010, based on the 2002 novel of the same name by Tatiana de Rosnay.

Members of the Parisian Jewish community have criticized the monument because it does not in any way specify the Jewish identity of the victims of the roundup, nor, despite its foregrounding of a little girl holding a baby doll, indicate a high percentage of children interned at the Velodrome ‘Hiver. The inscription mentions “antisemitism,” but does not use French words for Jews, Jewish, or Judaism. Unlike many other monuments there are no explicit Jewish symbols nor are the sculpted figures and their belongings shown with any Jewish attributes. This deliberate omission is in keeping with a long French governmental policy that strives for cultural leveling, a policy that was explicitly violated in the targeting of Jews.

Main Surveys & Excavations
Sources
Carrier, Peter. Holocaust Monuments and National Memory Cultures in France and Germany Since 1989: The Origins and Political Function of the Vél' D'Hiv' in Paris and the Holocaust Monument in Berlin (New York and Oxford: Berghahn Books, 2005).

Wiedmer, Caroline, The Claims of Memory: Representations of the Holocaust in Contemporary Germany and France (Ithaca, NY and London: Cornell University Press, 1999)
Type
The following information on this monument will be completed:
Language editing
Measurements
Copy-editing
|