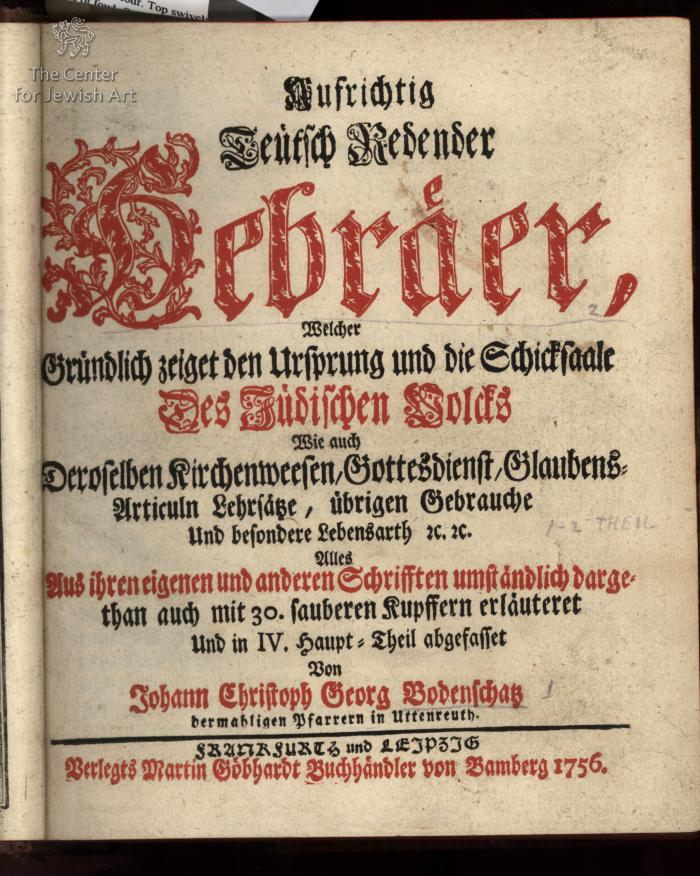 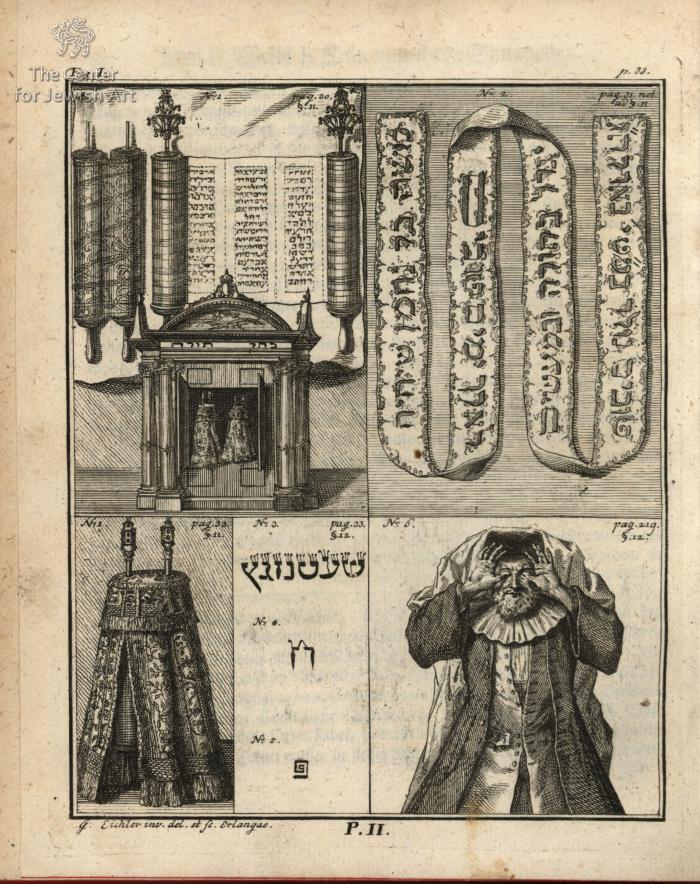 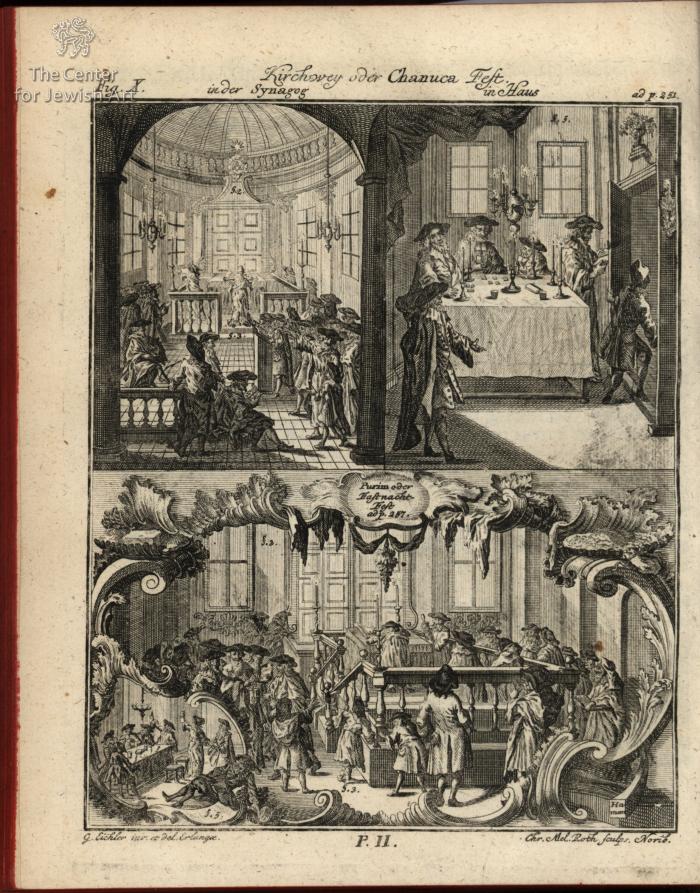 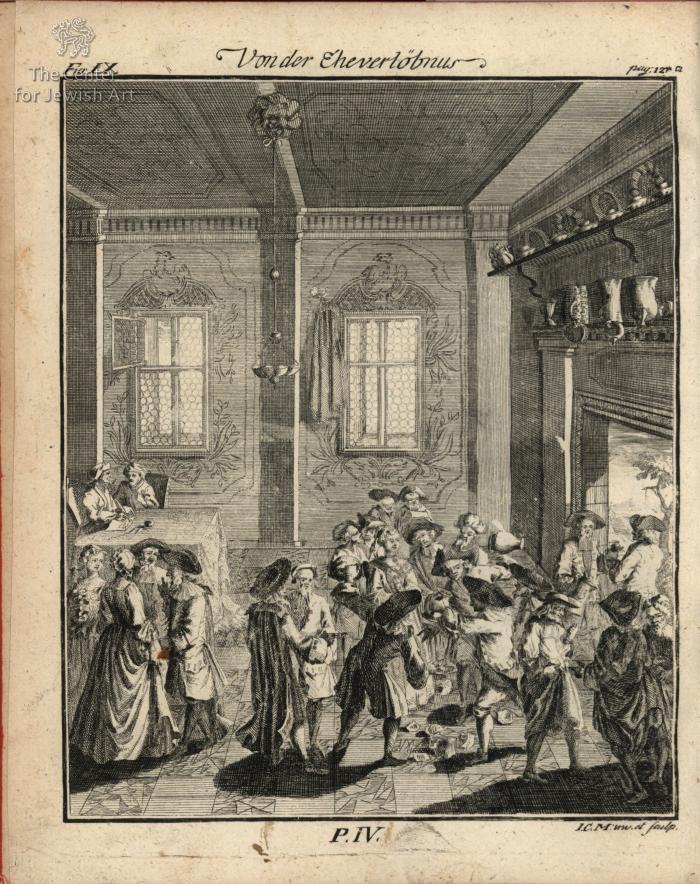 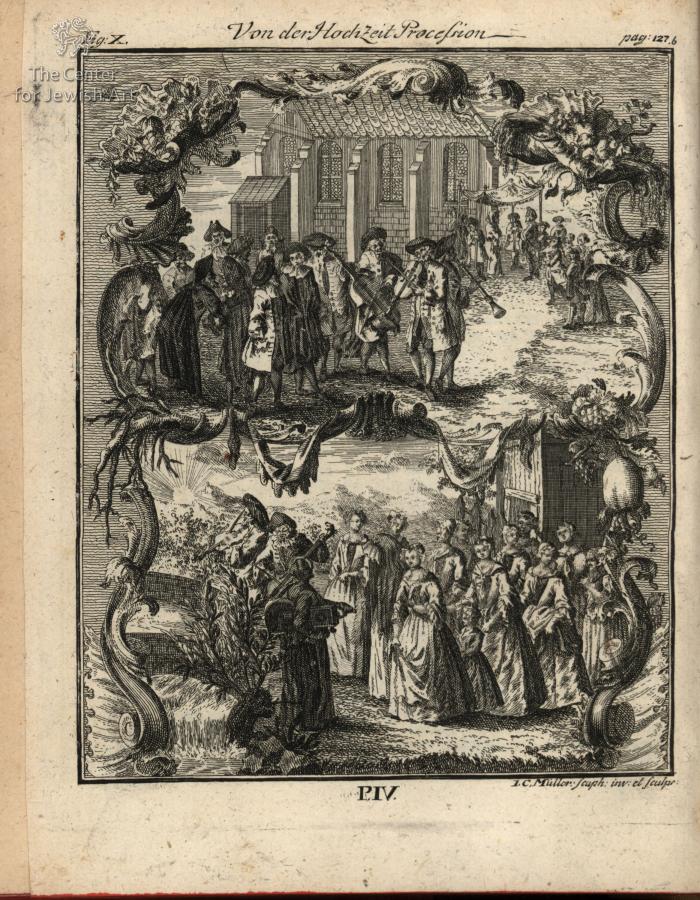 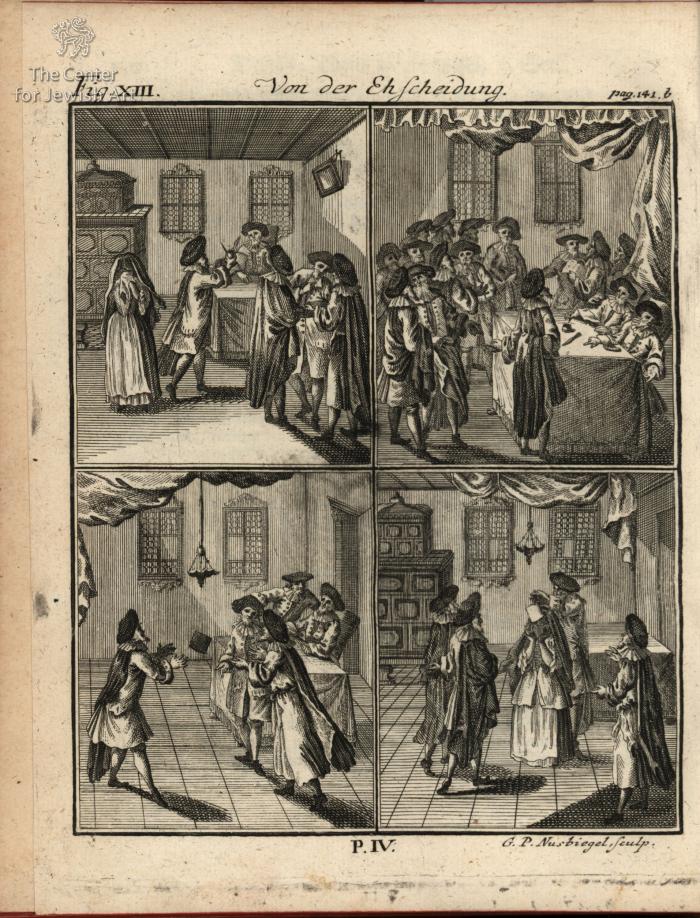 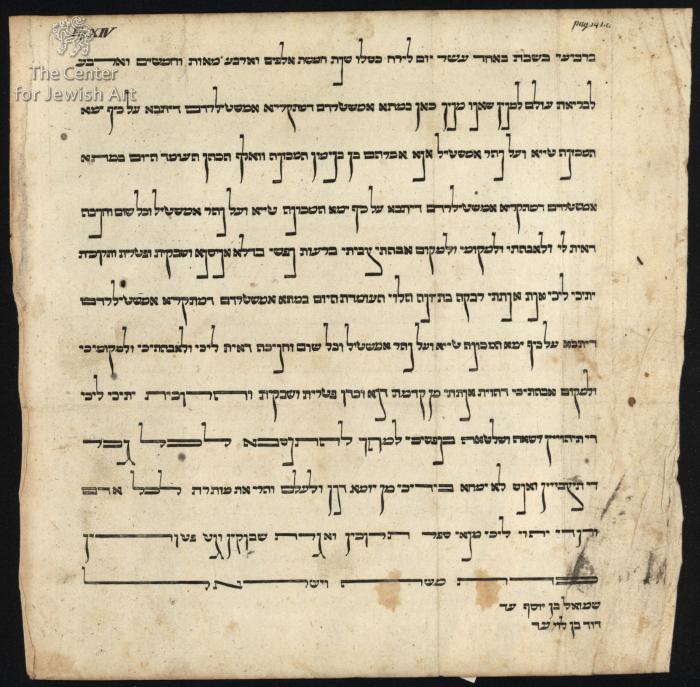 Kirchliche Verfassung der Heutigen Juden by Johann Christoph Georg Bodenschatz – Frankfurt and Leipzig, 1756 with engravings depicting Jewish Customs Kirchliche Verfassung der heutigen Juden, sonderlich derer in Deutschland, by Johann Christoph Georg Bodenschatz. Erlanger, 1756. Four parts in two volumes. German. Second edition. German theologian Johann Christoph Georg Bodenschatz's (1717-1797) work, describing Judaism and Jewish customs, particularly the customs of Ashkenazi Jews. The book includes detailed and objective descriptions of Jewish customs during the author's time and provides a highly important source of information for the history of Jews in the 18th century. The book includes twenty-nine (out of thirty) engraved plates. The engravings by Gottfried Eichler, Georg Paul Nusbiegel and Johann Conrad Müller depict various Jewish customs.
Aufrichtig deutsch redener Hebräer welcher gründlich zeiget den Ursprung und die Schicksaale des jüdischen Volcks, Johann Christoph Georg Bodenschatz. Bamberg, 1756. German. Scholarly study by Johann Christoph Bodenschatz, researching the Jewish religion and Jewish customs (four parts in one volume). The book contains, in addition to Bodenschatz’s research, thirty detailed and beautiful engravings, most of them depicting Jewish customs: blessing of the moon, prayers in synagogue, Tisha BeAv and more. Johann Christoph Georg Bodenschatz (1717-1797), German Protestant theologian, outlined, in detail, in this book the Jewish life, mainly of Ashkenazi Jewry. Bodenschatz describes in detail Jewish customs of his time, and succeeds in portraying objectively the Jewish way of life and customs.
Bodenschatz was born at Hof, Germany. In his early education at the gymnasium of Gera he became interested in Oriental and Biblical subjects through his teacher, Schleusner; and later (1733), at the University of Jena, he took up Oriental languages as a special study.
Bodenschatz entered the Church, and was vicar of Uttenreuth, ultimately (1780) becoming superintendent at Baiersdorf. He devoted his life to Jewish antiquities, and is said to have made elaborate models of the Ark of Noah and of the Tabernacle in the wilderness. In 1748 he summarized the results of his researches in his Kirchliche Verfassung der Heutigen Juden, Sonderlich Derer in Deutschland (in four parts, Erlangen). This work gives, besides a short history of the Jews, which is derived mainly from Schudt and Basnage, a full account of Jewish ceremonial, drawn by the author from both written and oral sources and illustrated with engravings. Of these engravings some are imitated from Picart, but most of them were especially designed and engraved for the work; several have been reproduced in the Jewish Encyclopedia.
Bodenschatz generally gives an accurate account of Jewish ceremonial and custom; his work is consequently an original source for the actual practise of Jewish ceremonial in mid-Germany in the first half of the eighteenth century. This is the second edition of the book that appeared in Frankfort in 1756 under the title Aufrichtig Deutschredende Hebräer, oder Die Gebräuche und Ceremonien der Juden.
He died at Baiersdorf near Erlangen.Bodenschatz’s faithful observations and detailed descriptions of contemporary Jewish customs in Germany, depicting Jewish life on the eve of the Emancipation. A German Christian Hebraist, Protestant theologian and student of Oriental Languages at the University of Jena, Bodenschatz (1717-1797) authored several monographs on Jewish antiquities. This, his major work, was intended for a Christian audience.
It was not unusual for Christian Hebraists to describe contemporary Jewish life with great accuracy and understanding. In this work, originally published under the title Kirchliche verfassung der heutigen Juden, Bodenschatz presented an account of the customs and ceremonies of the Ashkenazic Jews of 17th-century and early-18th-century Germany.The volume is richly illustrated with 30 copper plate engravings, some of which were taken from the first volume of Bernard Picart’s Cérémonies et coûtumes religieuses de tous les peoples du monde, which had been published a few years earlier, but most were prepared especially for this volume. They depict a variety of customs including prayer (in and out of synagogue), ritual slaughtering, Sabbath and holiday observance, etc.
The engravings are the work of Eichler Gottfried (1677-1759) a German artist and engraver.
The image of ritual slaughtering shows the many aspects of Shechitah in the courtyard for a building. In the foreground, two men hold down an ox as the shochet cuts its throat with a chalaf (knife). At left, a bodek manual examines the lungs of the hanging carcass. The scene also includes a pair of bodekim who are visually inspecting the extracted lungs and two men slaughtering a fowl. Along the side of the building several hanging carcasses are being carved for sale.