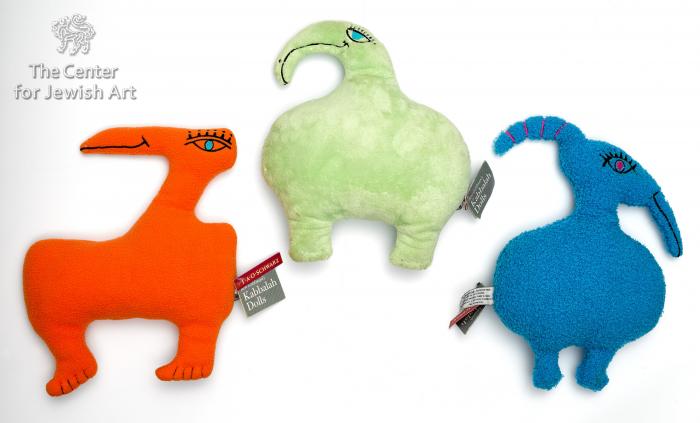 Kabbalah Dolls are a trio of plush dolls based on an ancient Kabbalistic amulet containing the images of three angels, Sanoi, Sansanoi and Samangalaf.

The amulet that was used for centuries to provide spiritual protection for children has now been reinterpreted by Ken Goldman as adorable plush. These dolls make the perfect gift for those who like a little history, mystery and fun in their designer toys.

"Kabbalah Dolls" are the first release of "Biblical Beasties" a design office founded by Ken Goldman using images from ancient Biblical manuscripts and mystical texts as inspiration for their designer toys and accessories.

"Kabbalah Dolls" are an exclusive F.A.O Schwarz product and are on sale now both on-line and at all their stores.

Goldman, 47, grew up in Bradley Beach, N.J., where his father was a rabbi. The artist and his wife, Sandy, made aliyah 22 years ago to Kibbutz Shluchot, a religious kibbutz at the foothills of the Gilboa Mountains in Ein Harod, where they still live. But his “Kabbalistic Beasties” — plush dolls reminiscent of ancient kabbalistic amulets — are flying off the shelves back in New York at FAO Schwarz, Manhattan’s fabled toy store.

The plush beasts come in three varieties — Sanoi in green velour, Samonglif in burnt orange plush and Sansoni in a nubby cobalt blue — and sell for $15. The cozy critters are big enough for a kid to snuggle with, ranging from 11 to 14 inches in height.

“I am not, by far, a kabbalah fanatic,” Goldman says. “I was initially attracted to the unusual graphics associated with kabbalistic elements, combinations of letters and symbols, which are supposedly charged with mystical powers.”

The kabbalah dolls originally debuted in 2002 as three-foot-tall, fabric sculptures at the Mishkan L’Omanut (Ein Harod’s Museum of Art). Goldman was inspired by three unique characters etched onto a ninth-century amulet traditionally hung over children’s cribs for centuries, which he believes are representative of three angels guarding the child and providing spiritual protection. “I just had to rescue them from their original texts,” he says.

Transforming the angels into plush dolls made perfect sense to him. “Stuffed animals are a child’s most comforting friend,” he says. Friends who had visited the exhibition kept asking him to produce a smaller version of the kabbalistic beasties to be purchased as baby gifts.

Goldman let the idea bounce around in his head for a while. But family responsibilities and day-to-day life, including work on the kibbutz fishponds and running Kayitz Bakibbutz (kayitz.com), a summer camp for children with special needs, kept him busy.

Still, he put his degree in industrial design from Pratt Institute to use by designing three prototypes, which he sent to a factory in China to be produced.

Then, in September 2006, he found out about the FAO Schwarz Toy Audition. Four times a year, the company invites toymakers to present their creations to a panel of judges. The odds are slim; only five or six out of the hundreds of toy ideas presented make the cut. But Goldman was in Chicago visiting family, so he boarded a short flight to New York to try his luck.

He had no idea what he was getting himself into. But sometimes it’s better that way, Goldman says.

“It was a mob scene,” he recalls. “When I got there, everyone was uptight and pacing the aisles. They gave me papers to fill out with little-print lawyer type. People were looking over their shoulders, scared that their ideas would be stolen.”

Goldman waited his turn, growing more anxious as time ticked on. Yet he found a receptive audience with the FAO Schwarz people. “They were enamored by the actual designs themselves as well as the story behind it,” he says. “It has a little history, a little mysticism. It’s not another ducky for the bathtub.”

The FAO Schwarz people promised they’d be in touch. “I walked out of there with a great feeling,” he says.

Then the hard work began. Contract terms were ironed out, e-mails volleyed back and forth and eventually, this past September, the “Kabbalistic Beasties” went on sale.

Though FAO Schwarz is a privately held company and does not divulge sales data, the company confirmed that the “Kabbalistic Beasties” are selling, with prominent placement on the first floor of the store. “The colors are great, the shapes are fabulous and it’s a unique plush,” said spokesperson Nanette DiFalco. “It’s part of our ‘Characters With Attitude’ line, and we’re selling more of those than the typical teddy bear.”

But Goldman isn’t likely to become an overnight millionaire. Since Kibbutz Shluchot still operates as a traditional kibbutz and has yet to be privatized, all profits from the kabbalah plush dolls will go to the kibbutz, not Goldman’s personal bank account. “Anything I earn, I give over to the community,” Goldman says. Sometimes it’s frustrating, he admits. But he doesn’t regret his decision to live on a kibbutz. “It’s the most amazing place to raise a family.”