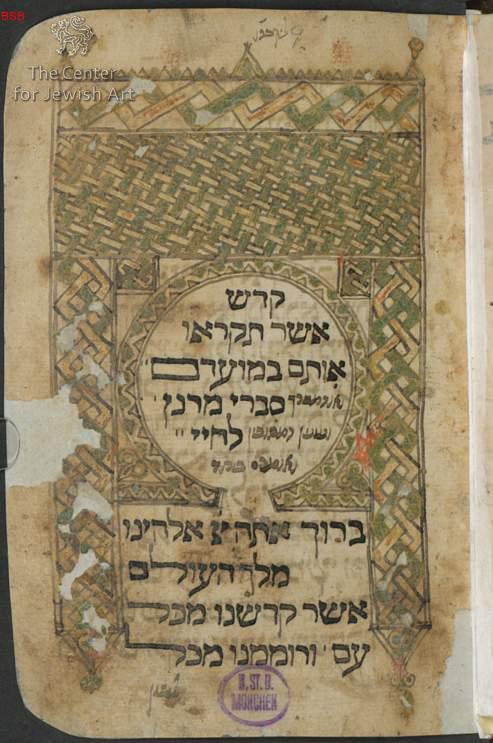 This set has no children

The original decoration of the manuscript consists of decorated arches and frames done by the scribe, in green and orange and dark brown ink. They are filled with foliate scrolls and stylised guilloche motifs, the scrolls mostly in spared-ground technique on green and orange grounds (e.g. fols. 10v-11, 23, 26) or dark brown ink (fols. 30v-31); stylised rosettes (e.g. fols. 23, 26, 30v-31) and other floral motifs (e.g. fol. 20), as well as geometrical patterns of all-over carpet designs, wattle, all-over pattern of crosses (e.g. fols. 9, 19v, 27v) and  knot motifs in the spandrels (fol. 9).

This prayer book of the Moroccan rite (Tiqun Pesah) consists of a Hebrew Haggadah (fols. 9-21v) and Dhir for Passover (צ'היר / טהיר של פסח), which includes haftarot in Aramaic and piyyutim (fols. 22-33v). The arrangement of quires is not original, but the result of rebinding. The additional first quire (fols. 1-6) is of different paper inscribed by six later hands with notes in Hebrew and Judaeo-Arabic, as well as sketches; two other leaves of the same paper at the end of the book include piyyutim (fols. 34-35v).

The decoration programme of the original part was executed by the scribe and now consists of eight full-page arches, six of which are horseshoe-shaped (fols. 9, 23, 26, 27v, 30v-31), and two panels illustrating the mazzah (fol. 19v) and maror (fol. 20). The arches are decorated with foliate and geometrical patterns in green and orange.

The style is typical of decorated manuscripts from the Tafilalt region in south-eastMorocco. The colours and decorative patterns recall the 1838 Passover Haggadah and Dhir written by Moshe Shmaya Betan in Tinzolin, Tafilalet (cf. figs. 1 and 2), and another Dhir from the same area of c.1850 (cf. figs. 3 and 4). The common patterns and colours of orange and green can be found also in an Esther scroll and marriage contracts (Ketubbot) of the region. Some Ketubbot are marked Sijilmassa, the Jewish name for the Tafilalt area (cf. figs. 5 and 6).

There are other Passover Haggadah and Dhir manuscripts in the style of Tafilalt region, dated in the 1870s. One, of c.1875, includes an illustration of the maror (bitter herb) as a stylised stem with two branches, standing on a semi-circular base within an arch. This stem-shaped maror recalls that in our manuscript

(cf. figs. 7 and 8), as well as that in another 19th-century Moroccan Haggadah, although the latter's style differs (fig. 9).

continued use of the typical geometric and foliate designs and colours as late as the beginning of the 20th century (cf. figs. 10 and 11).

Many manuscripts were produced during the 19th and the beginning of the 20th century in this rural region for its various small communities (Moshe Bar-Asher 1991:147), but the style of script showed little change. On the other hand, the densely composed decoration became richer, using similar motifs. One example is a manuscript from Tafilalt, produced according to its colophon in 1911 by Moshe Elasri (;משה אלעסרי fig. 12).

Of special interest in connection with our manuscript is a Haggadah and Dhir (Tel-Aviv Gross, MO.011.09), which according to the colophon was written in 1870 by Moshe ben Yitzhak Maman in Outat (Outat Oulad el Haj), a small town in north-east Morocco in the Fez-Boulmane region. It was richly decorated in black ink in spared-ground technique, and includes a drawing of silver Berber twin fibulae flanking a comb (fig. 13). The drawing emphasises a text which twice mentions Moses, perhaps alluding our scribe Moshe. In the added first quire of our manuscript two sketchy drawings of similar fibulae are drawn by two different hands: a dexterous drawing possibly by Hand 6 (fol. 3v-fig. 14), and a cruder version by an unidentified hand (fol. 2). They resemble Moshe Maman's jewel in most details, in particular by flanking an object which recalls a comb. Although it can be argued that since the triangular fibulae are very common inMoroccoand so anyone could draw them anywhere, the unusual composition with a comb in the centre suggests a close relationship between the Dhir of Maman from Outat and the first quire which was added to our manuscript. Moreover, the knot motif above our drawing is an enlargement of that in Maman's fibulae and it can thus be assumed that it served as a direct model for Hand 6 who copied it in our added quire.

This assumption leads to the following conclusions: since the script of our original manuscript and its decoration do not resemble Maman's, it seems that his manuscript from Outat was not in front of our original scribe. Indeed, our manuscript is closer to the Tafilalt style, especially to the early manuscripts of 1838 (fig. 2) and c.1850 (fig. 4). Our additional quire, if it indeed copies Maman's jewel of 1870, is of about this time. Apparently the six crude hands which haphazardly entered various notes and sketches in that quire were members of the family which owned our Tafilalt manuscript. At some point the added quire was bound with our manuscript, whether in Tafilalt or Outat we shall never know.