© Copyright of the University of Manchester, Photographer: N/A, 2016. 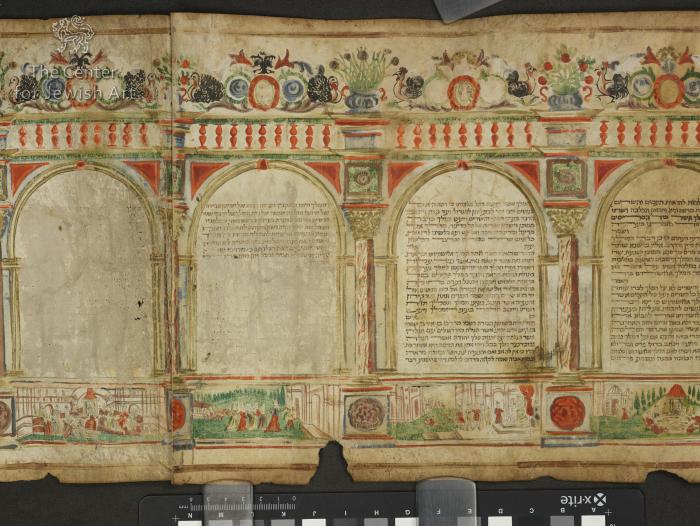 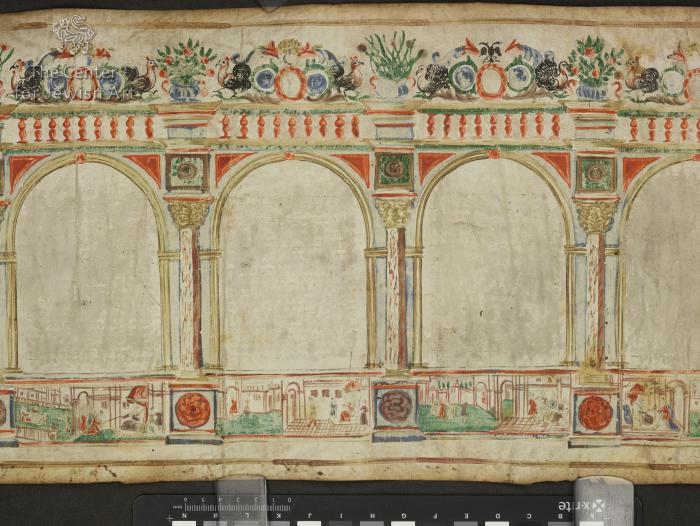 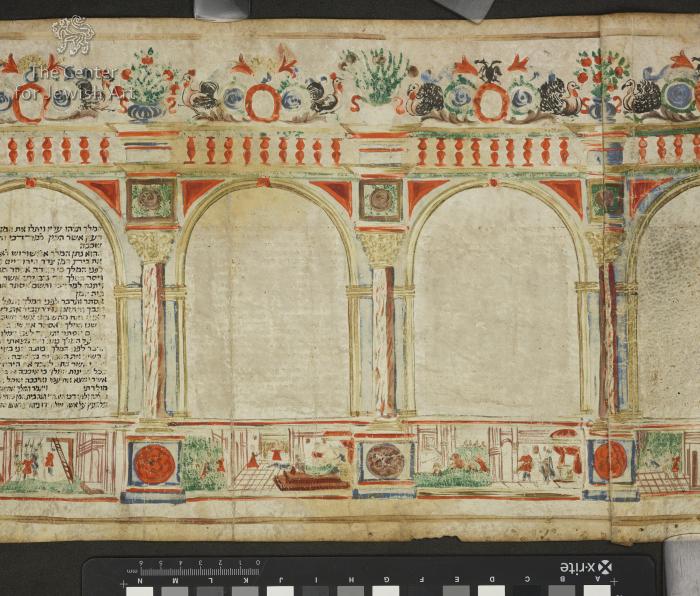 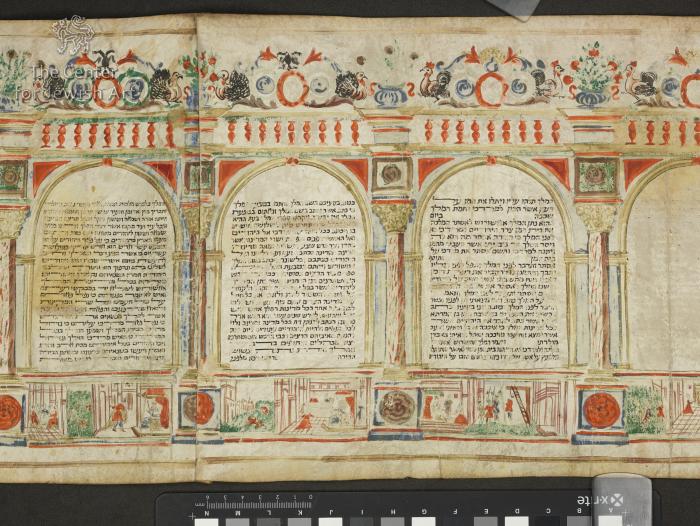 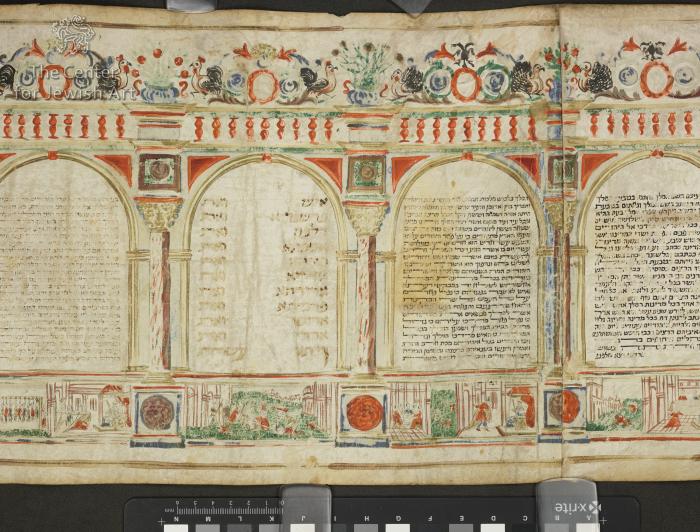 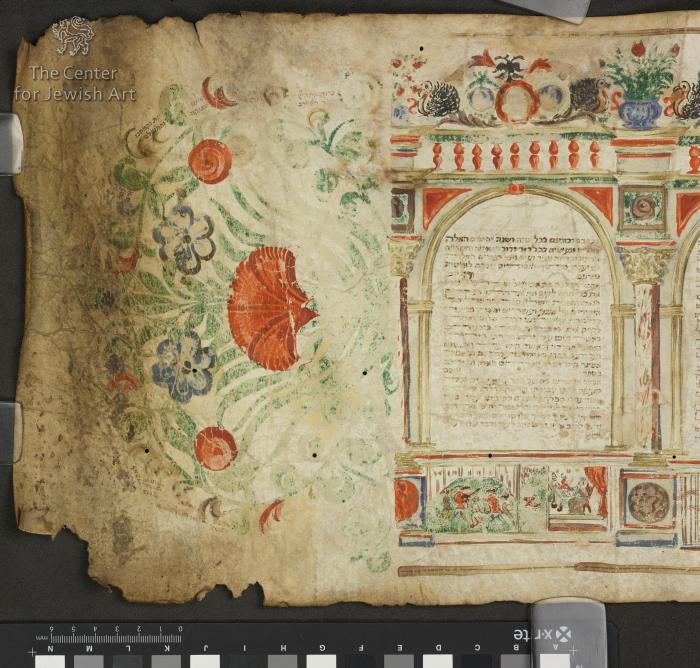 The family of Italian Esther scrolls from the second half of the 17th century named by Mendel Metzger after Judaica collector, Moses Gaster (1856–1939), of whose collections an exemplar of this manuscript formed a part (see M. Metzger, “The Earliest Engraved Italian Megilloth”, Bulletin of the John Rylands Library 48:2 (1966), 381‒432, esp. 390). It includes Esther scrolls produced in mixed technique in which decorative border is partly printed and colored by hand while the Hebrew text of the Book of Esther is inscribed by a scribe. Main part of the decorations consists of a series of arcades, under which the text of the Book of Esther was inscribed. The text panels are interspersed by columns whose bases are decorated with flowers that separate rectangular frames with figurative scenes chronicling the Book of Esther. Upper margins are filled with a balustrade on which are placed flower-filled vases and pairs of roosters and turkeys. These details are present in all exemplars of the scrolls, however, particular manuscripts differ in detail. The decorative scheme of Gaster II scrolls shows common features with Griselini scrolls.

The manuscript is preserved in fair condition; it lacks its opening part and some damages are visible.

There are some damages in the final part of the scroll too and losses in the sheets' edges.

The text is damaged, a substantial part of it is erased, seriously faded, or restored with a second layer of ink.

The illustrations are well preserved.

This scroll is decorated in the style of the Gaster II type (for the explanation of the name see "Additional Remarks"). These lavishly decorated megillot, produced with mixed techniques in which the decorative border is partly printed but also features copper engravings and hand-colored illuminations. In this style, the Hebrew text of the Book of Esther is penned by a scribe. The main part of the pattern consists of a series of arcades, under which the text of the Megillah is inscribed (in the exemplar from the former Gaster collection several columns are erased). The text panels are separated by columns whose bases are decorated with flowers. These floral bases separate rectangular frames in which figurative scenes chronicle the narrative of the Book of Esther. The upper margins feature a balustrade on top of which colorful cartouches are drawn. This exemplar is exceptional because three cartouches are filled with drawings: two busts and possibly a coat of arms with a tree and hands in the gesture of priestly blessing. Generally, in the Gaster II style, these cartouches are flanked by two roundels, and pairs of roosters and turkeys. These decorations are separated by flower-filled vases atop each column. The opening and final decorations vary in different examples of Gaster II scrolls. The megillah from the former Gaster collection opens with foliate and floral ornaments in which the "Four animals" from Pirkei Avot - "Ethics of the Fathers" (5:20) surround a decorative cartouche filled with initial benedictions. Its final part contains a symmetrical decoration composed of foliate and floral ornaments.

The scroll is formed of 4 membranes containing 19 columns of the text with 23 lines, except for col. 16 with 11 lines divided into two parts.

The text is inscribed in the Hebrew square Italian script in brown ink of different hues, on the flesh side of parchment membranes. Some parts of the text are copied in black ink but this can be a second layer applied later.

The sheets are made of very thick and stiff parchment. Their blank side is rather dark and rough.

The ruling - made with a hardpoint - is barely visible.

The benedictions: the initial benedictions are inscribed in the cartouche that is a central part of the opening decoration. The first six words of the blessings are abbreviated.

The final benediction and the poem for Purim are written at the end of the scroll; they are integrated into the outermost part of the decoration. The layout of the text is totally irregular.

The name "Gaster II" was introduced by Mendel Metzger in an article entitled "The Earliest Engraved Italian Megilloth" published in the "Bulletin of the John Rylands Library" (48:2 (1966), 381‒432, esp. 390). The type was named after Moses Gaster (1856–1939), the rabbi, scholar, and Judaica collector of whose collections a scroll adorned with this pattern formed a part (at present this is the scroll Gaster Hebrew MS 711 stored in the John Rylands Library in Manchester that is the manuscript described here). At least 8 manuscripts representing this type are known; they are preserved in private and institutional collections. For their descriptions see "Related objects".

The decorative scheme of Gaster II scrolls shows common features with the Griselini and Griselini-Related scrolls (see "Griselini scrolls" and "Griselini-Related scrolls" in the Index), whereas the narrative scenes are the same as in the scrolls representing Klagsbald type (see in the Index). The exception is frame no. 19 that in Gaster II scrolls joins the illustrations no. 19 and 20 from Klagsbald scrolls.

In the manuscript, some details are painted in white that is an exception for the scrolls representing this group.

Originally, some details (e.g. flowers on the columns' bases) possibly were painted in gold but at present only green shade is visible.

Around some illustrations, blots of ink are visible.

The scroll belonged to Moses Gaster's (1856–1939) collection. In his hand-written catalogue, it is listed under no. 711. At the beginning of the scroll, in its upper margin, there is an inscription in black ink: "711 M. Gaster".

The manuscript is described in: