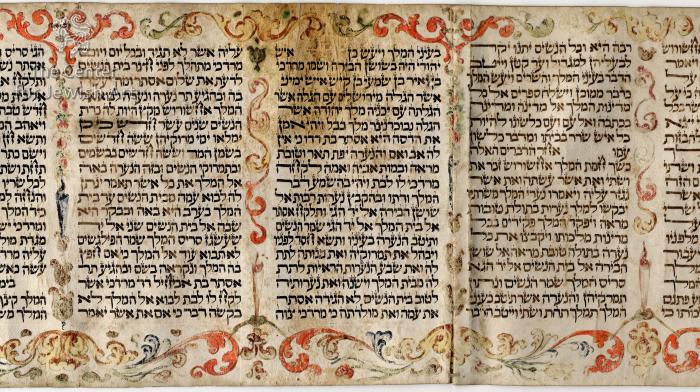 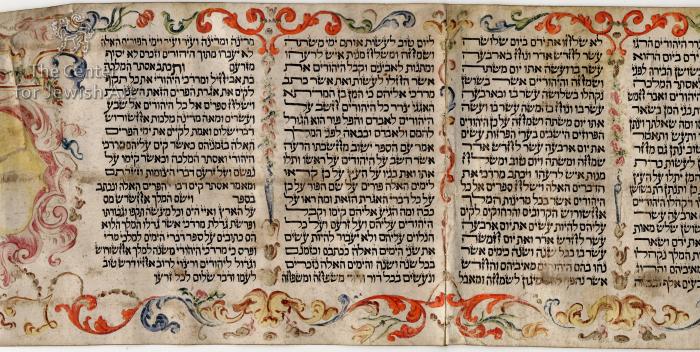 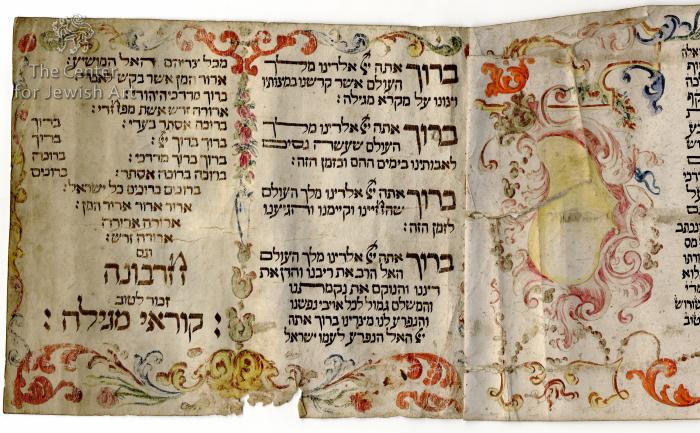 The scroll opens and closes with empty decorative cartouches narrower at the top; after the final cartouche, a sheet with benedictions and piyutim is stitched to the megillah. The upper margins are narrower than the lower margins, and they all are adorned with acanthus and various floral motifs. The spaces between the columns of the text are decorated with similar motifs, supplemented with hangings and garlands. Šedinová (p. 84 – see “Bibliography”) noticed that they are not hanging from above, suggesting that the decoration is painted upside-down on the membranes. If the hangings are placed in the lower part of the columns - that is, they are standing rather than hanging - then they resemble lighted candles or torches. It is difficult to guess what the intent of the scroll’s maker in this respect was but the cartouches seem to be in their proper orientation.

The Book of Esther in Hebrew with initial and final benedictions and piyutim: portions from שושנת יעקב, and the name only of the piyut קוראי מגילה.

The scroll is formed of 10 sheets containing 27 columns of the text, followed by 2 columns with initial and final benedictions and a liturgical poem. Each column of the main text has 19 lines, except for col. 23 which has 11 lines divided into two half-columns.

The number of text columns per sheet varies: sheets nos. 2-8 contain 3 columns each, sheet no. 1 contains 4 columns, and sheets nos. 9 and 10 contain 2 columns (the last one includes additional texts related to the Megillah reading).

The text is inscribed in Hebrew square Italian script with tagin, in black ink, on the flesh side of the parchment membranes.

The letter ח (Es. 1:6) is written as a typical letter whereas all other letters ח are formed of two elements joined with a roof. The letter ת (Es. 9:29) is enlarged and bolded. Other large and small letters are included in col. 23.

Numerous letters in col. 22 are stretched to fill the space in the lines.

The ruling is made with a hardpoint.

The last sheet (no. 10) is dedicated to the additional texts: the initial and final benedictions and a liturgical poem.

Benedictions: the initial words of the benedictions - ברוך - are enlarged and inscribed separately from the rest of the formulas. Additionally, the name of Harbona at the end of שושנת יעקב is also enlarged, as is the title of the next poem - קוראי מגילה ("Korei Megillah") to be recited. The Tetragrammaton is replaced by a ligature.

The former number of the manuscript is Ms 260. Šedinová in the article (see "Bibliography") uses the number 125281.

History/Provenance
Šedinová says (p. 83) "The scroll is the first one of the three illuminated Megilloth Esther owned by the State Jewish Museum". The scroll was amongst the Judaic objects gathered by the Nazis during 1942-1945.
Main Surveys & Excavations
Bibliography

The images of the scroll are available on https://collections.jewishmuseum.cz/index.php/Detail/Object/Show/object_id/221936 (accessed on 13.11.2020).