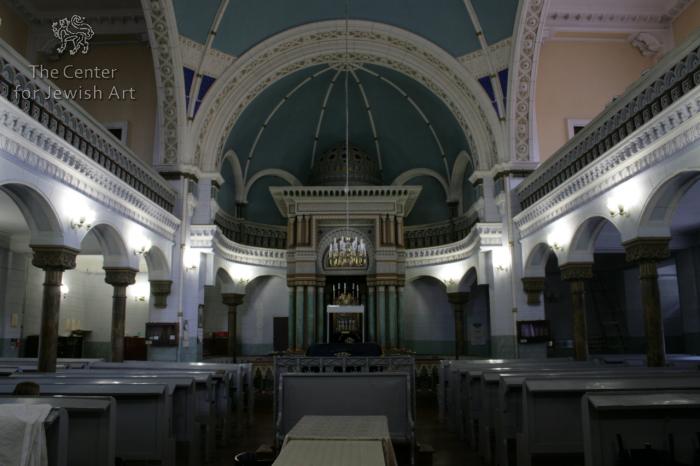 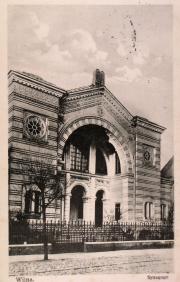 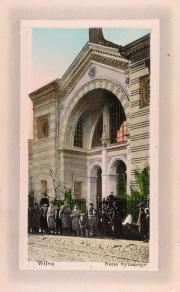 The Choral Taharat Ha-Kodesh Synagogue was the “progressive”synagogue of the maskilim and therefore differed from the traditional synagogues. It is the sole functioning synagogue in Vilnius since WW II.

The first minyan of maskilim was opened by the Katsenelenbogen family in their courtyard in the early 1820s and it existed until the late 1840s. However, the idea to establish a public maskilic synagogue appeared only in October 1846, when the maskilim were infuriated by the eulogy of the city’s maggid Rabbi Shlomo Zalman Zeev Volf from Derechin (1788–1866) for the leading maskil and writer Mordechai Aharon Gintsburg (1795–1846), in which he publicly attacked the Haskalah movement. Already in February 1847 several leading maskilim applied for permission to establish a maskilic synagogue in a rented wing in the house of Samson at 21 Nemetskaia (todayVokiečių) Street. The traditionalist opponents of the Haskalah twice petitioned to the provincial authorities in order to prevent the opening of the new synagogue and even sent a petition to the Minister of Interior in St. Petersburg. However, with the support of the superintendant of the Vilnius educational district, the maskilim obtained the permission, and the new synagogue was inaugurated in May 1847, in the presence of the provincial governor.

In the following years the synagogue moved to the house of Yeḥiel Danzig on Oshmiany Lane (Ašmenos St.) and then to Gordon’s house on Nemetskaia Street. The Taharat Ha-Kodesh differed from other Vilnius kloyzn with its orderly prayers and neatness.

The prayers were accompanied by a choir; hence, its second name was the Choral Synagogue (khor-shul in Yiddish). Special attention was given to regular preaching, at the beginning in German and since the late 19th century – in Russian. The establishment of a maskilic synagogue open to the public was a clear political, ideological and cultural statement, which showed the maturity of the Haskalah movement and its readiness to advance to the public space and to confront directly the conservative circles of the Jewish community.

Soon after the establishment, the idea to build a separate building for the synagogue was articulated; however, as a Hebrew newspaper complained in 1867, “it costs much money.” The existence of a design for the Taharat Ha-Kodesh Synagogue made by architect Mieczysław Strebejko in 1877 testifies to the advanced plans for erecting a separate building. The synagogue was planned on Novaia (today Islandijos) Street, in the Neo-Gothic style: it had a spacious prayer hall with a Torah ark combined with a bimah on the northeast and a women’s gallery on three other sides. However, the project was not carried out and the Talmud Torah school was built on that plot in 1891. In 1878 Monoshevich, a wealthy worshiper of the Taharat Ha-Kodesh, built a special wing in his house at 22 Nemetskaia (Vokiečių) Street to accommodate the synagogue: it had a women’s gallery and a central bimah. After a conflict between the house-owner and the worshippers in 1885, the synagogue was closed: wooden benches were taken away and the bimah was donated to the inhabitants of the New Town. However, a year later, on Rosh Ha-Shanah (New Year) Holiday in September 1886, a new synagogue was inaugurated in a rented house on Politseiskaia (today Arklių) Street. It is described as a “narrow and short house, the women’s section is like a chicken coop.” In 1888 the synagogue board asked for support from the korobka tax in order “to improve the prayer house and to enlarge it;” however, it seems that the request was left without response. In 1892 a harmonium was installed in the synagogue, but it was used only on weekdays.

In 1894 the synagogue board elected a “building commission” in order to advance with the permanent building, but of no avail; this idea was revived in 1897–98. A house and an empty plot were bought in 1899 at 35 Zaval’naia (today 39 Pylimo) Street, in order to build there the permanent synagogue; meantime, the temporary synagogue moved there.66 In 1901 architect Aleksei Polozov designed a sumptuous choral synagogue. At the end, however, the synagogue was built according to a much simpler design by the Jewish technician Daniel Rosenhaus; Polozov only supervised the construction. The cornerstone was laid on April 23, 1902.The new building had 350 seats for men and 200 for women, central heating and electric lighting. The building costs amounted to 45,000 rubles, and the Torah ark was donated by D. Lipski. The first prayer in the synagogue was held on Rosh Ha-Shanah in September 1903, and the official inauguration ceremony was celebrated during the Hanukah holiday three months later, in December 1903. However, the northeastern street façade of the synagogue was completed much later, in 1914 – as seen on pre- 1914 photograph, which show that the decorated capitals of the engaged columns on either side of the entrance are missing, as well as the Hebrew inscription in the frieze: כי ביתי בית תפלה יקרא לכל העמים (“for my house shall be called a house of prayer for all people,” Is. 56:7). In 1933 the synagogue had regular worshippers.The preserved building of the Taharat Ha-Kodesh Synagogue is adjusted to a trapezoid plot. Its monumental, mainly two-storey mass is complimented with single-story annexes, and topped by a dome. The main northeastern façade of the synagogue, facing Pylimo Street, is designed as an arched recessed portico, set between pylons and lateral low annexes, and beneath a gable surmounted by the Tablets of the Law. Each pylon is pierced by a rose window in the upper part and coupled rectangular windows in the lower one. The entrance porch comprises three arches, separated by two piers decorated with engaged columns, which are terminated by openwork oniondomes finals, perhaps alluding to Jachin and Boaz of the biblical Temple. The tripartite division of the porch is continued in a large Palladian window above it (a similar window pierces the opposite façade). The entrance façade of the synagogue is plastered, and its horizontal articulation imitates oriental polychrome brickwork. Its overall style is Neo-Moorish, despite the Neo-Classicist central window. Other façades are unassuming and barely plastered.

The vestibule and staircases precede the prayer hall, where the direction towards the southeastern Torah ark is perpendicular to that of the entrance. On the first floor, the prayer hall is surrounded on three sides by women’s galleries. The Torah ark, preceded by a domed canopy decorated with colonettes, dentiled cornice and crenellation, is placed in a semicircular apse, within the ambulatory. A pulpit for a preacher – a distinctive feature of a “progressive” synagogue – is situated in front of the ark. The bimah is fenced by a metal parapet and situated in the midst of the pews. The first floor of the ambulatory served the choir. Four massive piers support the central cupola, while the women’s galleries and the choir rest on columns reminiscent of Alhambra. The hall is abundantly lit by the Palladian windows and by the cupola skylight, glazed as a Star of David.

Currently, four plaques in gilded frames are situated on the walls of the prayer hall. Two of them, one entitled “Psalms for the Holidays according to the Custom of the Vilna Gaon” and another containing several holidays’ prayers, originate from the Leather Goods Retailers’ Kloyz “Beit Yaakov” at 7 Gaono Street. The origins of the third plaque, containing thirteen Maimonides’ principals of the Jewish faith, is unclear, though it certainly originates from another synagogue, to which it was donated by Shalom Tsam in 1913. The fourth plaque was made after WW II and it includes the prayer in memory of the Jews who perished in the Holocaust as well as yor-tsayt dates for the 125 Jewish communities in Lithuania. 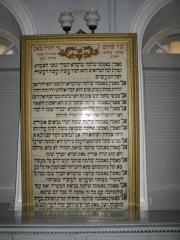 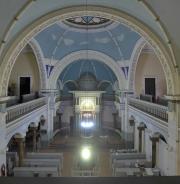 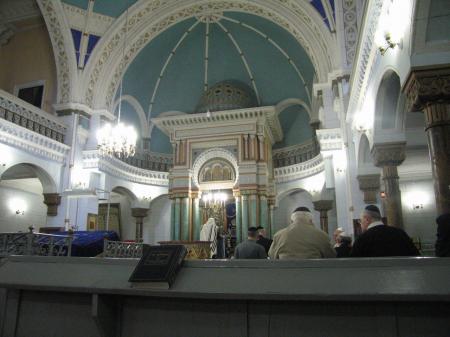 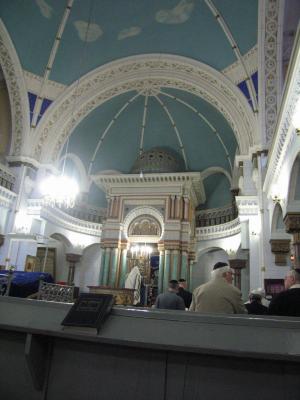 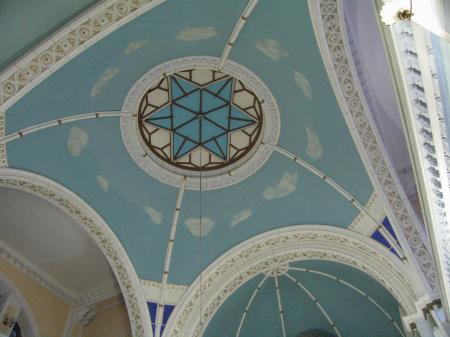 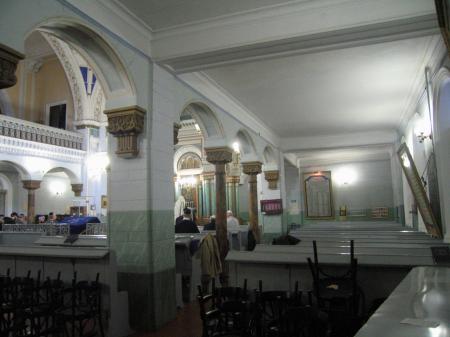 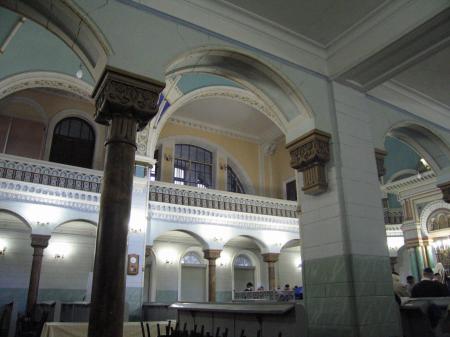 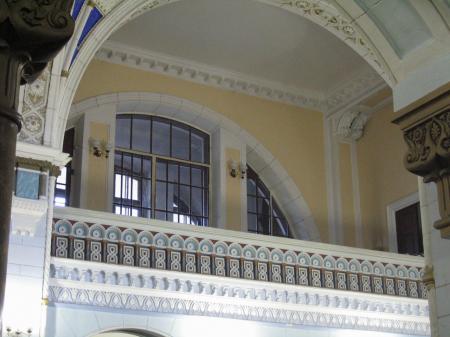 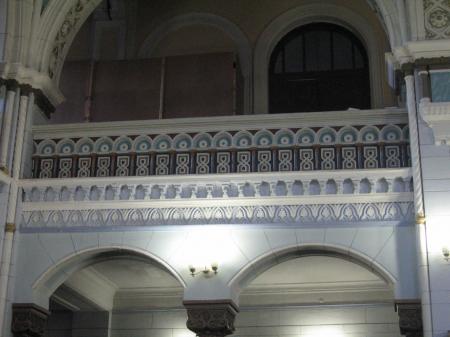 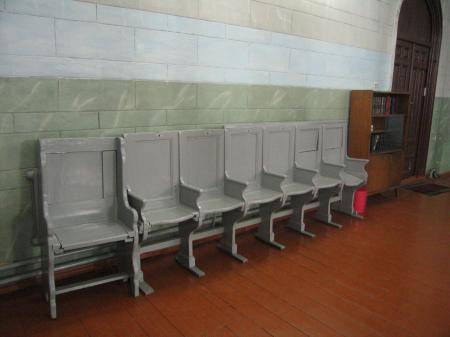