The masonry synagogue was built in 1816. As can be seen in an early 20th-century postcard, the synagogue was covered with a high mansard roof. The lower part of its northwestern façade was pierced by a segment-headed doorway and three round-headed windows placed asymmetrically. The first floor contained four basket-arched windows overhung by architraves. A two-tiered ogee-form gable above it concealed the mansard roof. The lower tier of the gable was flanked with volutes and pierced by four basket-arched windows with triangular pediments, and the upper tier contained a semicircular window in the center. A stone vase topped the gable. The stringcourse separating the first floor from the gable was underlined by a meander frieze. The synagogue was heavily damaged by fire in 1914. The correspondence regarding its reconstruction and fundraising from the 1920s indicates that the synagogue’s walls were preserved; however, it needed a new roof and interior furnishings. A photograph taken after 1918 shows that the roof and gable were indeed lost, and that the remaining walls were protected by narrow temporary roofing to avoid further weathering. In 1923 the Jewish community commissioned a reconstruction project from engineer J. Klimašauskas and submitted his design to the authorities. It seems that Klimašauskas planned a completely new building on the place of the synagogue’s ruins. The design features a Neo-Baroque synagogue of rectangular plan (21.50 x 14.6 m) covered with a very steep hipped roof. The ground plan shows that the two-storey northwestern part was meant to contain a vestibule with a men’s cloakroom on the southern side, and a staircase and women’s cloakroom on the northern one. The prayer hall has twelve windows, the Torah ark is indicated in the niche in the central bay of the southeastern wall, but the location of the bimah is not specified. The women’s gallery protrudes into the prayer hall as a rounded balcony, and the entire inner space is spanned with a wooden cove dome. The entrance in the northwestern two-storey façade is placed symmetrically: pilasters emphasize the corners and frame its central bay, which contains the portal topped with a plaster Star of David and an oval shouldered window above it. The side bays are pierced by two windows: rectangular on the ground floor and round-headed on the first floor. Pilasters divide the side, southwestern and northeastern, façades into six even bays, each containing a tall round-headed window. The entrance leading to the women’s staircase is situated in the northern corner of the northeastern façade. The interior location of the Torah ark is indicated by a protrusion in the central bay of the southeastern wall.  Although Klimašauskas’ design was approved, it was not implemented due to lack of funds.16 In 1930, the community presented a new, more modest reconstruction design, drawn by civil engineer V. Rimgas of Tauragė County. Rimgas used the surviving walls of the synagogue, preserving the tripartite division of the side façades, but abandoning the original shape of the roof and gable. He planned a synagogue of rectangular base (25.97 x 17.55 m), consisting of a two-storey part and a lofty prayer hall and covered with a hipped roof. The prayer hall was lit by two tiers of segment-headed windows: two pairs in each tier on the side walls, and two windows in each tier, flanking the place of the Torah ark on the southeastern wall. In the northwestern part, the women’s section on the first floor, as well as a large room on the ground floor underneath, were connected to the prayer hall through openings; both rooms had stoves. The men’s entrance to the synagogue was located in the northeastern façade, while the staircase to the women’s section was accessed from a door in the northern corner of the northwestern façade.

Photographs from around 1930 show that the damaged synagogue was rebuilt and covered with a hipped roof. The tall basket-arched windows, situated in the upper part of the walls, and surmounted with architraves, were evenly distributed. The side façades were divided into three bays by pilasters, each bay comprising a pair of windows. The southeastern façade had a central pilaster indicating the interior placement of the Torah ark, surmounted by a semicircular dormer. The northwestern façade had only corner pilasters; a large basket-arched doorway, probably for men, was situated in its center; three small round-headed windows were placed asymmetrically on the ground tier. The entrance for women was situated at the northern corner of the northeastern façade. All the façades were crowned with a meander frieze, preserved from pre–WW I times, and a molded cornice. The walls were additionally reinforced with metal stringers.

Apparently, the prayer hall originally had twelve windows. The only evidence of the interior arrangement is the photograph showing Rabbi Israel Meir Lesin by the Torah ark. Judging from this picture, the Torah ark was framed by plastered brick columns and was accessed by two flights of wooden stairs. Between these flights was an amud topped with an Art Deco stained glass screen.

The former synagogue has undergone several transformations as it was turned into a palace of culture in Soviet times. In 2007, it was a double-storey structure built of bricks and boulders, plastered and covered with a hipped roof of asbestos sheets. It has preserved the original rectangular ground plan; however, the L-shaped one-storey annex of white silicate brick (formerly plastered) conceals almost entirely the lower parts of the northwestern and part of the southwestern façades. The windows of the side façades, except for the westernmost ones, were extended downwards; those on the northwestern and southeastern façades were bricked up, while a door has been cut in the middle of the southeastern façade. The remains of the decorative features include the pilasters, the plastered stringcourse of the frieze, and a simplified two-step cornice. The interiors have been destroyed. The building stands abandoned and is rapidly deteriorating. 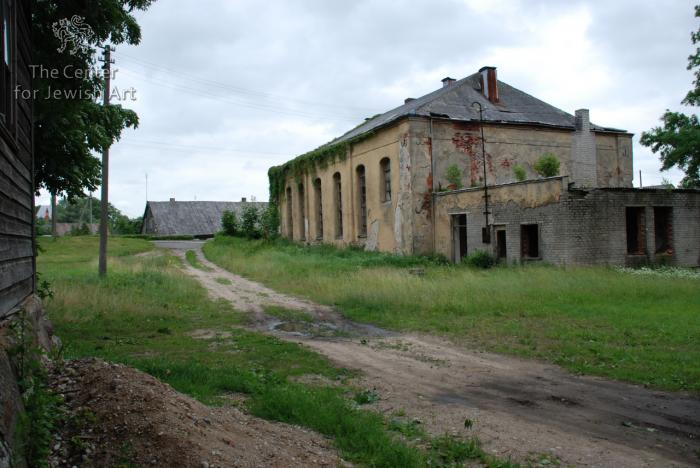 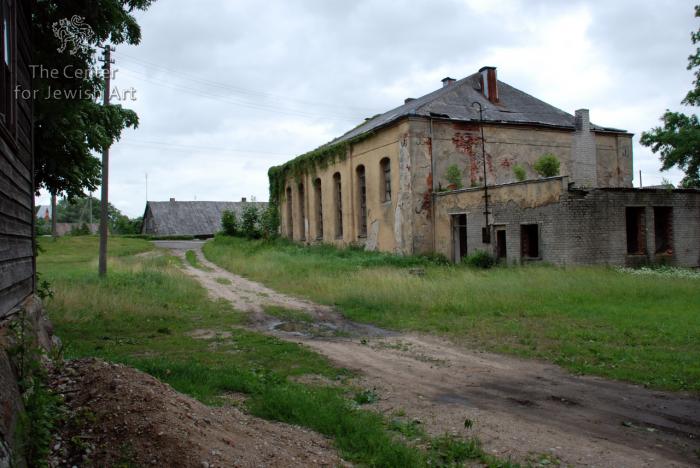 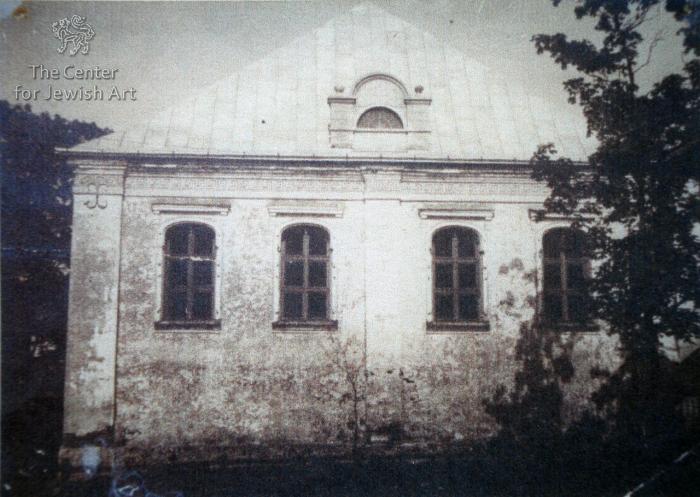 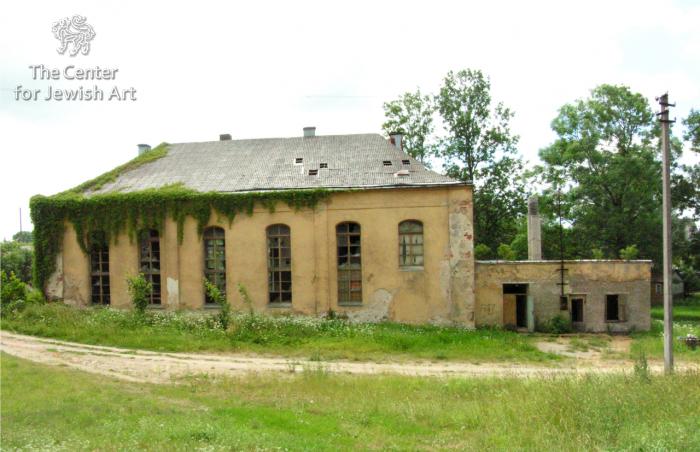 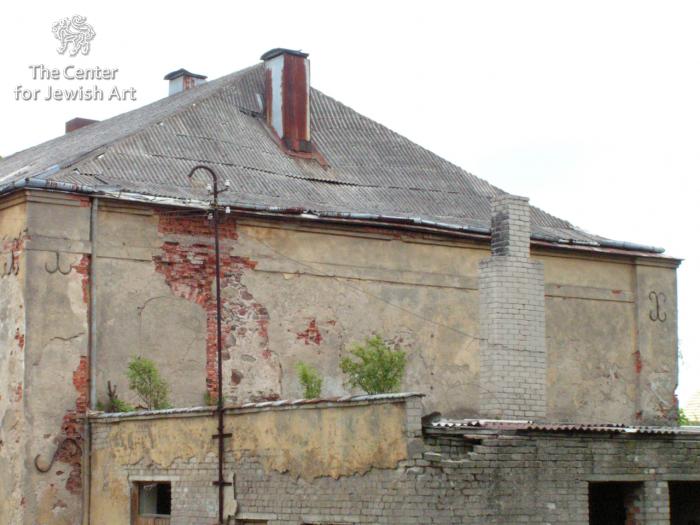 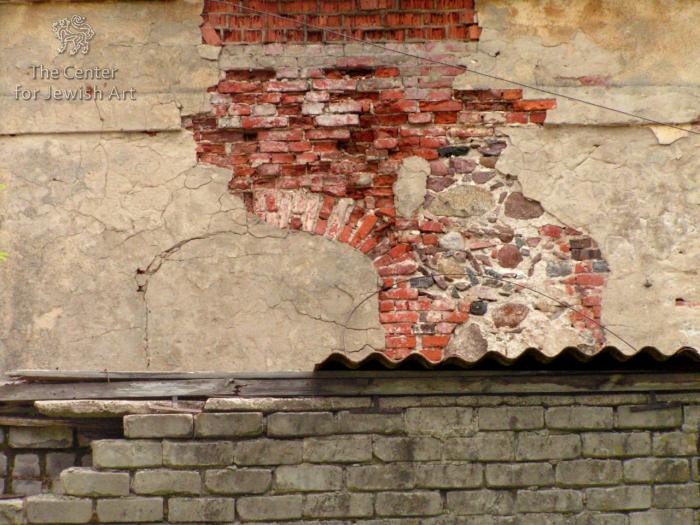