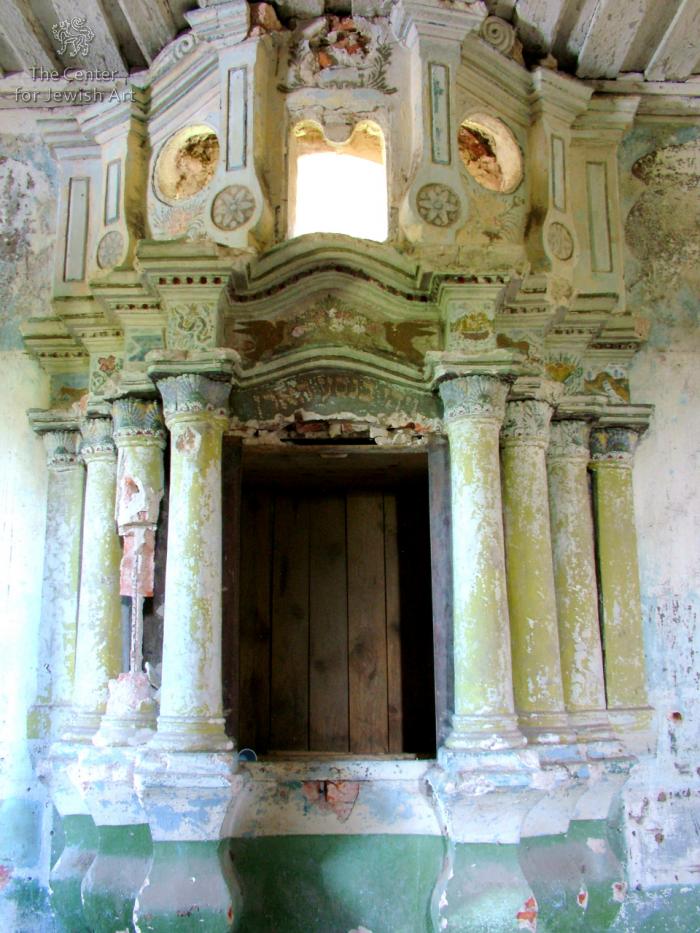 The Torah ark is built of brick, plastered and painted. It consists of a pedestal, a main tier with a niche for the Torah scrolls, and the upper tier reaching the actual ceiling (apparently, there were more tiers in between the actual ceiling and the original barrel vault). The pedestal of the ark is based on a stepping ground plan; it has a recessed middle part and squarish overlapping balusters on the sides. It is currently painted over in dark green. The main tier includes three columns and one pilaster on either side of the central rectangular Torah niche; they bear a broken entablature. The columns and pilasters are painted in light green and their capitals are cast in the form of shells, painted in blue and yellow, with a row of small shells painted in red and white. The Torah niche is spanned with a sinuous-shaped pediment. There is a Hebrew inscription in a field above the niche and beneath the pediment: ויהי בנסע הארן (“Whenever the ark set out,” Num. 10:35, the opening phrase of the prayer said when the Torah scrolls are taken from the ark to the bimah). Flowers flanked by two pigeons are painted on the pediment above the niche.

The frieze bears depictions of the Twelve Tribes of Israel. They are grouped according to their mothers (the children of Leah on the right, southern side, the children of Bilhah, Zilpah, and Rachel on the left, northern side) and placed in order of seniority. The tribe of Joseph is represented by his two sons, Ephraim and Manasseh, and Reuben is represented twice, thus expanding the number of images to fourteen. The depictions on the southern part of the frieze include, from right to left: a stream for Reuben (Gen. 49:4), a sword with the town gate of Shechem for Simeon (Gen. 34:25, 49:5-6), a mandrake for Reuben again (Gen. 30:14-17), a harp for Levi (I Chron. 15:16; II Chron. 5:12), a lion for Judah (Gen. 49:9), a donkey for Issachar (Gen. 49:14), and a ship for Zebulun (Gen. 43:13). On the northern part there are, from right to left: a serpent for Dan (Gen. 49:17), a deer (hind) for Naphtali (Gen. 49:21), a banner for Gad (symbolizing troops or a camp, Gen. 49:19), an olive branch (badly preserved) for Asher (Deut. 33:24), a flower for Ephraim (Is. 28:1), a bull for Manasseh (Deut. 33:17), and a wolf for Benjamin (Gen. 49:27). The parts of the frieze adjacent to the pediment and to the walls are covered with simple plants. In general, the depiction of the Tribes of Israel is a late phenomenon, which appears only at the last years of the 19th and early 20th century.

The upper tier of the Torah ark includes six pilasters. Four of them have a figured face, decorated with a flower rosette and a vertical panel above it. The central field of this tier contains a twin arch, apparently designated for the Tablets of the Law. Most likely, glass tablets were inserted there. Thus, the light shining through the window behind the Torah ark would illuminate the tablets as if visually referring to “the commandment is a lamp, and the law is light” (Prov. 6:23). Vestiges of a plaster Crown of Torah flanked by painted plants are discernable above the niche. The side bays of the upper tier are pierced with oculi, which would presumably have originally borne glass bearing inscriptions too. Vases with flowers are painted under the oculi.

The molded cornice above the pilasters is surmounted by two volutes abutting to the ceiling. This tier of the Torah ark is flanked by two eagles painted on the wall. 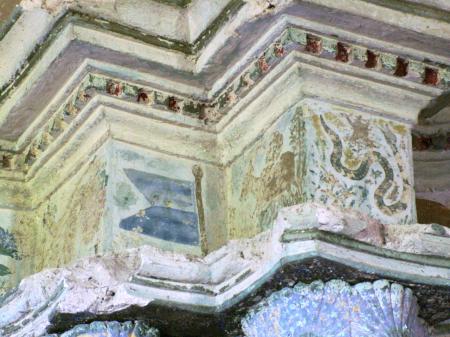 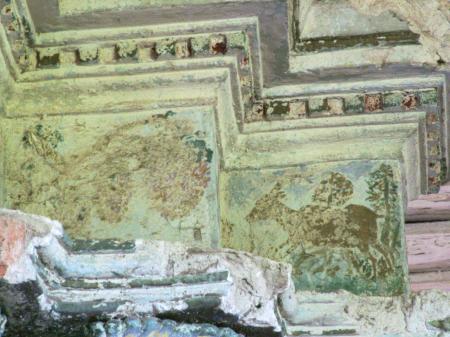 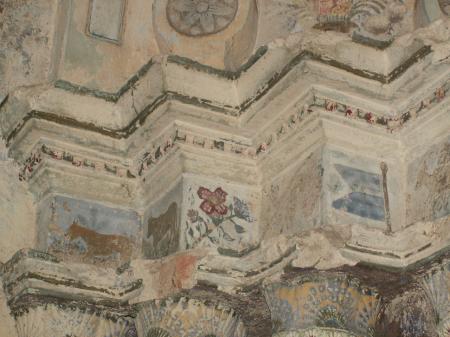 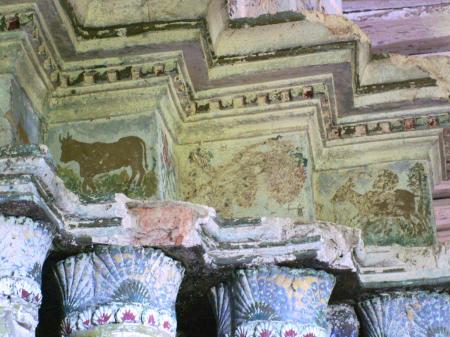 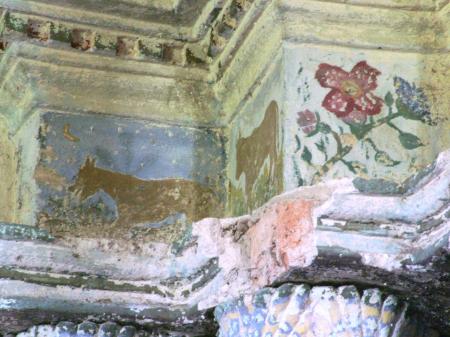 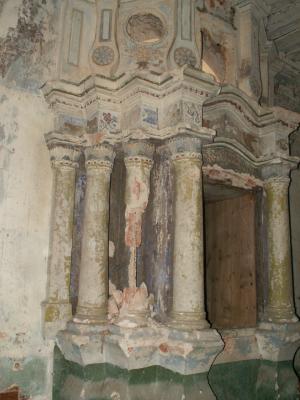 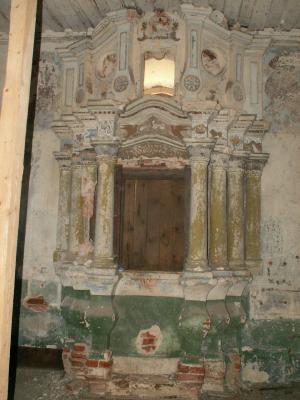