The composition and motifs of the painting on the ceiling (12.8m by 10m) consisted of system of concentric ornamental border edgings.

The center of the composition is taken up by a large vivid bunch of roses, daisies, and wild flowers displayed against the backdrop of the heavens with flying swallows. The bouquet is edged in with a border formed by a wreath of twelve medallions illustrating Psalm 150. The wreath formed by the medallions is framed by a twelve-pointed star composed of two hexagrams of contrasting color, a possible reference to the Star of David. Signs of the Zodiac are depicted in the triangles.

The composition in the ceiling center is flanked on the south and the north by two rectangular panels (the north one has been almost entirely destroyed as a result of the construction of the wall during the latest replanning, which split the prayer hall into two rooms). The corners of the panel are decorated with medallions showing the “Four Animals”:

The flat ceiling is supported by semi-circular vaults decorated with genre scenes, still lifes, and landscapes, all inserted into painted arches. The decorated arches are all interconnected, forming a single arcaded frieze along the perimeter of the prayer hall. In the center of the southwestern wall, above the space for the Torah ark, which had apparently been made of wood, a colorful pseudo-nuptial composition stands out: menacing lions flank the two Tables of the Covenant, shown against the backdrop of the rising sun and framed by partially open purple curtains.

Among the scenes integrated into the arcaded frieze, three independent iconographic cycles can be identified. Eight scenes connected with the seven Biblical characters  the “Ushpizin,” or “Guests” (two scenes are devoted to Jacob).

Twelve scenes presenting the symbols of the Twelve Tribes of Israel;

and six views of mountains occupying a special place in the Biblical narrative.

(Due to the remodeling of the building, when a new wall on the northern side split the main prayer hall into two, some of the wall paintings became part of the adjoining room, while the paintings in the inter-wall fold were lost).

Wall paintings along the lower register are part of a single architectural-decorative composition. The walls, cut through by twelve semi-circular windows, are divided into twelve parts by clusters of painted columns which as if “buttress” the “vault”; the columns are entwined with cerulean blue and royal purple fabric, creating the impression of a formal reception hall. Above every window, between the column clusters, a landscape or genre scene appears enframed by decorative cartouches. Two independent cycles can be singled out among these unusual paintings: views of holy sites in the Land of Israel, and scenes from the Books of the Prophets.

The balcony of the women’s section is decorated with a diptych consisting of two elongated landscapes enclosed in rectangular frames. One shows the “Holy City of Jerusalem”; the other is the “On the Rivers of Babylon” scene: 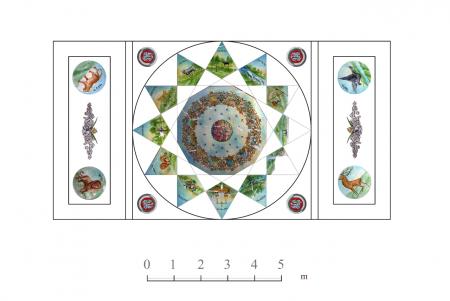 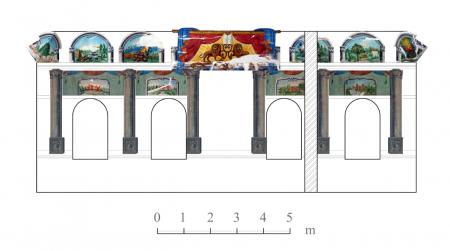 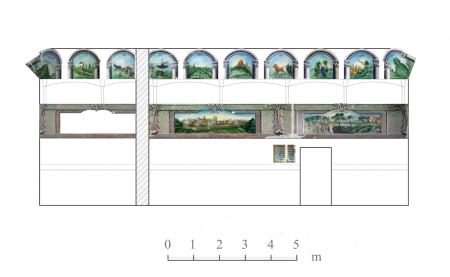 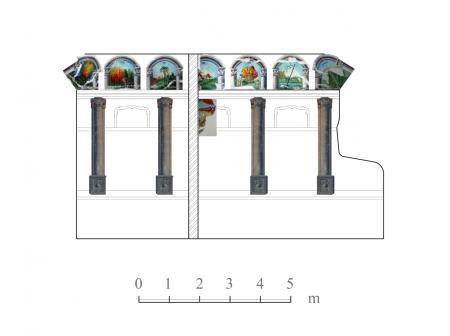 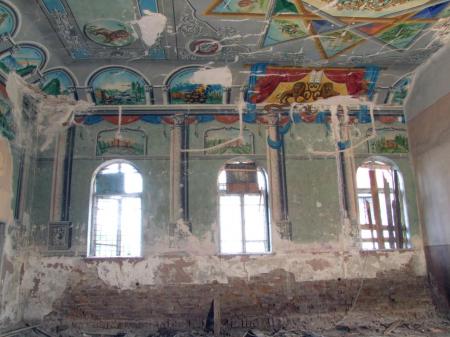 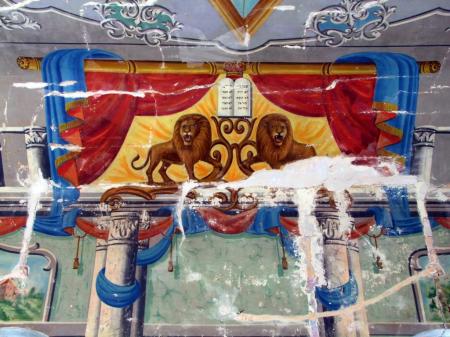 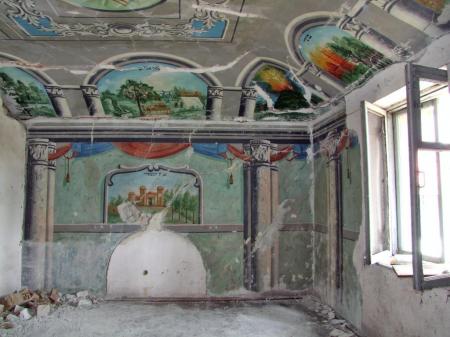 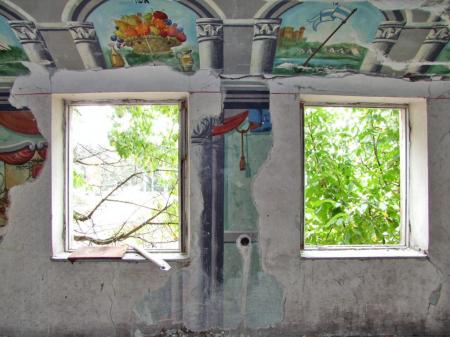 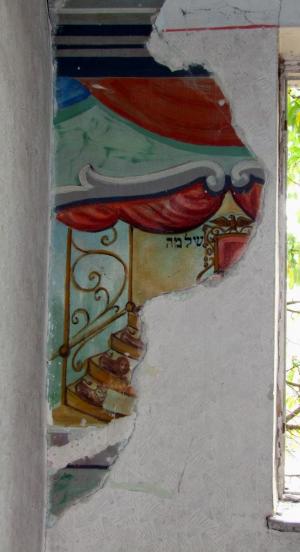