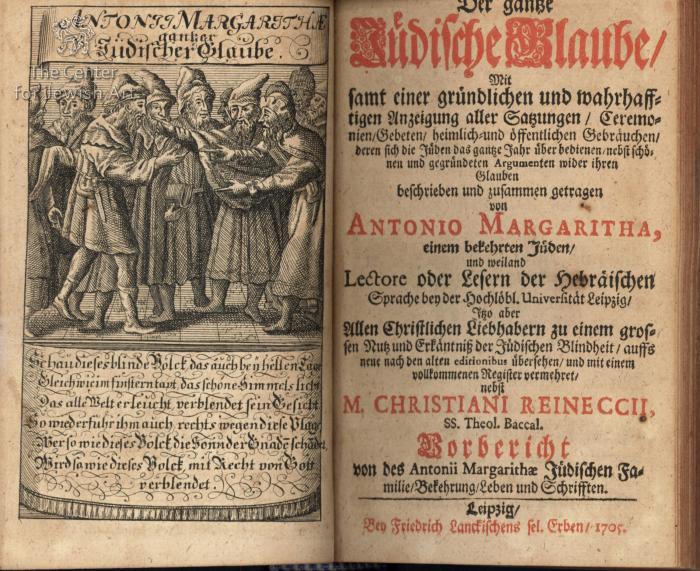 Der Gantze Jdische Glaube [The Whole Jewish Belief], by Antonio (Anton) Margaritha. An anti-Semitic, polemic work by the convert Anton Margaritha (1492-1542), a descendent of a well-known family of rabbis in Germany; son of the Rabbi of Regensburg Shmuel Margaliot and grandson of Rabbi Yaakov Margaliot. It was first published in Augsburg, in 1530, and includes the first translation of the Jewish prayer book for a non-Jewish readership (see: "Between Judaism and Christianity(ies), between Ethnography and Polemic: Antonius Margaritha's Writing on the Kabbalah in 'The Whole Jewish Belief'" [Hebrew], by Daniel Lehmann). Engraved title page. Der Gantze Judische Glaube claims to expose the true face of Judaism, mocks Jewish customs and makes serious accusations against the Jews. Margaritha warns his Christian readers against being in contact and trading with Jews, cautions them not to consult with Jewish physicians and portrays a negative picture of the Jewish Sabbath and the custom of using a "Sabbath Gentile". One of the worst allegations targets the political loyalty of the Jews, who are portrayed as treacherous subjects and supporters of enemy countries, headed by the Ottoman Empire. This work deeply affected Martin Luther, who was inspired by it to write his anti-Semitic book "On the Jews and Their Lies". Alongside its wide influence on anti-Semitism in early modern history, the book is also considered a valuable source of information about the daily life of Jews and their customs at the time. The grim accusations against the Jews made by Margaritha in this book led to a public debate, conducted in 1530 before the Imperial Committee that convened in the Reichstag of Augsburg, in the presence of Emperor Karl V. Margaritha's opponent in this debate was the well-known Jewish lobbyist Rabbi Joseph ben Gershon of Rosheim (Joseph Loanz). After Joseph ben Gershon refuted Margaritha's claims against the Jews, Margaritha was banished from Augsburg. [1] engraved title page, [15] leaves, 360, [24] pp.
Der Gantze Jüdische Glaube [The Whole Jewish Faith], by Anton Margaritha. Leipzig, 1705. German. Work on Jews and Judaism, mocking Jewish customs and raising various anti-Semitic accusations (the work greatly influenced German theologian Martin Luther when writing his treatise "On the Jews and their Lies"). [1] plate (engraving), [15] leaves, 360 pp, [12] leaves. 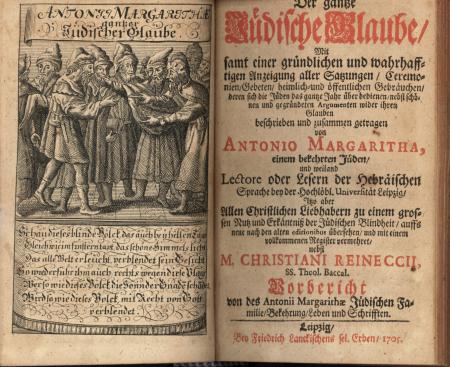 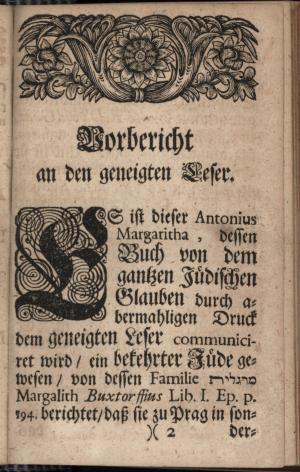 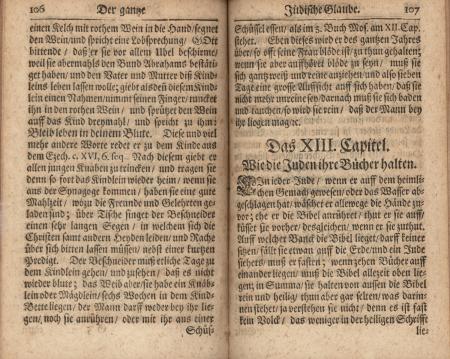 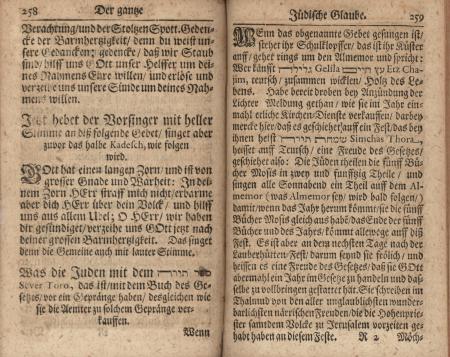