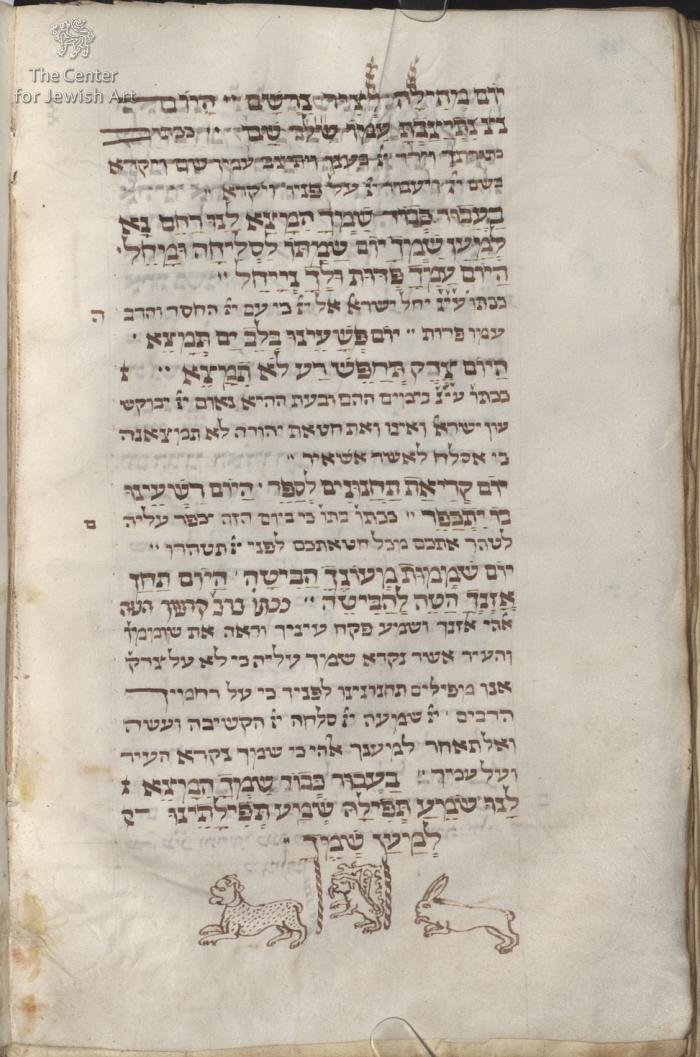 This small-size Mahzor, though no longer intact, originally comprised only piyyutim for the Special Sabbaths and festivals for the whole year. It was copied by Scribe A, vocalised by Menahem bar Yehiel and was not originally decorated. The only pen-drawn hybrid and animals are on the added leaves by the later Hand 4 (fols. 129v 130v, 136v). The careful proof-reading throughout the manuscript, the reference to well known vocalisers, the marginal annotations, and especially the additional piyyutim by four later hands suggest that the Mahzor was written for a cantor for liturgical use in the synagogue rather than for private use.

According to Goldschmidt, mahzorim which contained only piyyutim are not exceptional. Furthermore, some mahzorim remained in the cantor's pulpit for decades and the communities used to write in changes and even erase some texts to conform to the norm of the community (see Goldschmidt 1970, I: נ=40, though usually in cantor's mahzorim of large format). The manuscripts usually reflect the custom of the particular place of writing. However, in the Middle Ages the eastern rite, today called the "Polish rite", in contrast to the "Western Ashkenazi rite" is known to us from manuscripts of the 14th century in eastern parts of Germany but also in south German communities of Nuremberg, Rotenberg and Regensburg (for the distribution areas of the "Ashkenazi rite" from the 10th century to west and east of the German countries, see op. cit. I:יד=14,

The piyyutim according to western Ashkenazi rite added by Hand 1 to the original text (see Contents) suggest that the Mahzor was adapted to the needs of a community where the population changed over time due to immigration. For instance, the western Hand 1 has erased the liturgy (silluk) for musaf for the Day of Atonement ונתנה תוקף קדושת היום (fols. 116v-117) which was customary in eastern Ashkenaz (Y. and A. Fraenkel 2008:7).

The decoration by Hand 4 was popular as scribal art in thirteenth-and fourteenth-century Ashkenazi manuscripts in Franconia and neighbouring regions of south Germany. Although the motifs are often similar, the individual style of the scribes differs according to their dexterity. Nevertheless it is possible to compare the animals in our Munich Mahzor (fig. 1) to those in the initial word וידבר in the Vienna Rashi Commentary on the Bible of the 14th century from Franconia (fig. 2); and our goat and unicorn (fig. 3) to the deer and unicorn in the Franconian Siddur and Haggadah of the early 14th century (figs. 4- 5). Both unicorns are shown with the horn turned downwards and also resemble the pen-drawn unicorn adorning the colophon page of the Franconian Pentateuch of Gershom bar Eliezer of 1304 (fig. 6).

Considering the codicology in our manuscript, viz. the pricking in all margins and the plummet ruling, it was apparently produced in the last quarter of the 13th century (Beit-Arié 1981, pp. 70-71, 77-78), whereas the motifs and style of drawings executed by the later Hand 4 suggest a date at the beginning of the 14th century.

In contrast to the sparse decoration of the manuscript, the later binding is richly decorated. The cover was made in Heidelbergin 1553 for Ottheinrich Count Palatine (b. 1502, Elector 1556-1559), most probably by his bookbinder, Jörg Bernhardt of Görlitz (Mittler 1986 I:513-516; Schlechtez 2005:142-145), and carries the typical features of his bindings: a gilt portrait, the initials O.H.P. (Ott Heinrich Princeps), date of execution (1553), and his abbreviated motto M.D.Z. (Mit der Zeit). Ottheinrich had a personal library of several hundred books in Neuburg an der Donau and several thousands in HeidelbergCastlewhich he inherited from Friedrich II. Both libraries were united by Ottheinrich to form the Heidelberg University Library Bibliotheca Palatina in the Protestant Holy Ghost Church (Mittler 1986, I:1-13). Our Munich Mahzor, among other Hebrew manuscripts from the Ottheinrich Neuburg collection, entered the BSB in 1909 (Cod.hebr. 421-428; Walde 1916:229, Wagner 2003:30, 33). 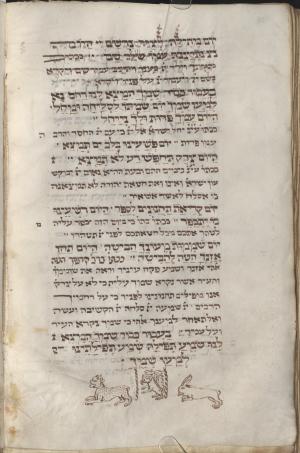 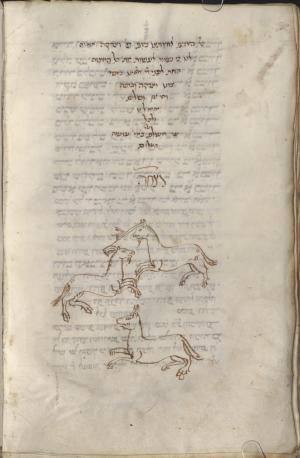 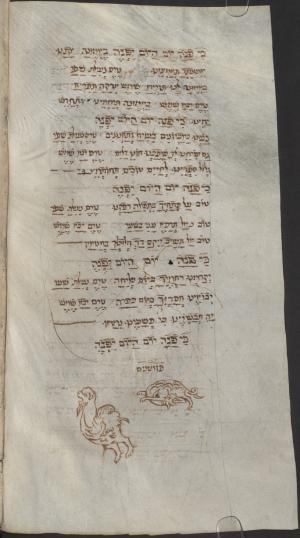 16th-century brown calf binding on wooden boards. Front and back are similarly blind-tooled with biblical figures, David playing the harp, the risen, blessing Christ, and St. Paulwith a book and sword, repeated within the outer frame. Floral scrolls within the inner frame. In the centre of the front cover is a rectangular gold-leaf portrait of Ottheinrich holding an open book and appearing in a window flanked by columns. Below is an inscription: "Ott Hainrich von G.G. (Gottes Gnaden) Pfaltzgrave Bey Rhein Hertzog in Nidern und Obern Bairn 1553". On the back cover is a central rectangle with Ottheinrich's coat-of-arms in gold leaf, with the letters M.D.Z. (Mit der Zeit) above and O.H.P. (Ott Heinrich Pfalzgraf) below.