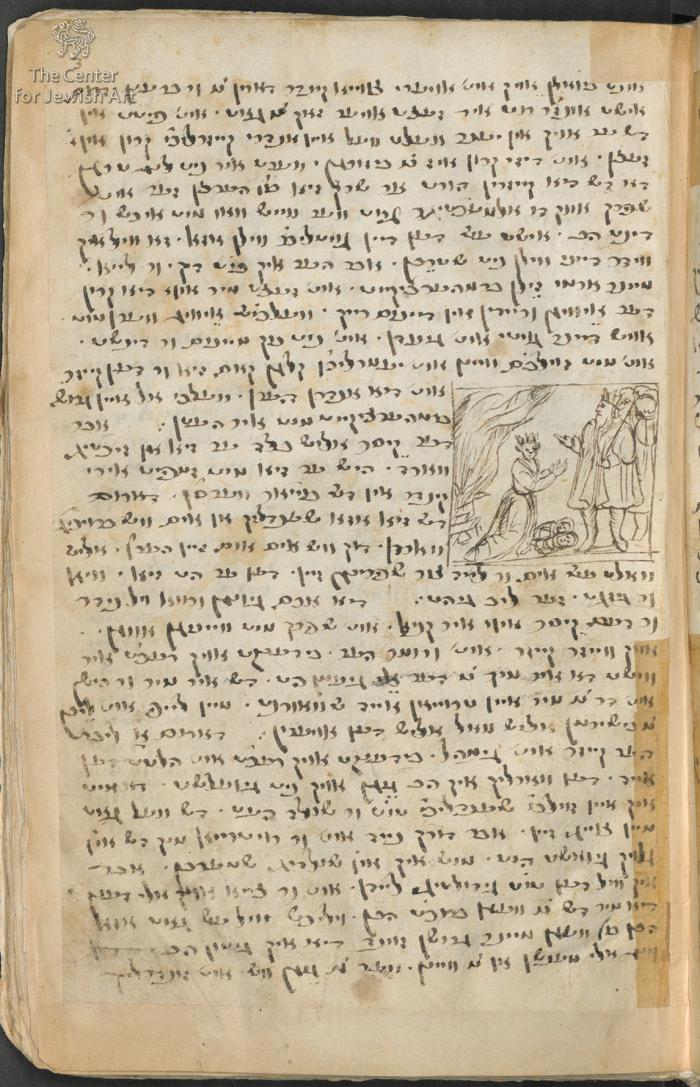 This manuscript is a collection of stories in Yiddish copied in Tannhausen, Germanybetween 1580 and 1600. The manuscript was decorated by the Jewish scribe Yitzhak bar Yuda Reutlingen with pen-drawn text illustrations within panels: eighteen illustrations for the text of Kaiser Octaviano and three for the twenty-two Maisses (Jewish stories). The story of Till Eulenspiegel, also included in this manuscript, is not illustrated. Although the model for the story of Kaiser Octaviano is unknown, our manuscript resembles in part the complete version which was printed inAugsburg in c.1568 by Matthäus Franck.

The German-Yiddish language is of East Swabia, nearAugsburg, between Tübingen andUlm(Timm 1987, pp. 465f). It was copied with pictures from a printed book with woodcuts, now lost.

The scenes on fols. 3, 4, 4v, 6, 8, 13, 16, 23, 28v, 30v, 39, 49, 57, 61 and 64 follow the woodcuts of the printed book of Augsburgc.1568, while fols. 32v, 53 and 55v illustrate different episodes not depicted in print. The scenes of Florens and the kidnapped Marcebilla (fol. 32v), Clemens escaping with the Sultan’s unicorn (fol. 53), and Florens and Marcebilla in a boat (fol. 54v) are not inAugsburg 1568, which suggests that this edition did not serve our scribe-artist. However, the printedAugsburg edition is more richly illustrated with 46 woodcuts, not counting the four missing ones with text at the beginning of our manuscript. Fourteen depictions are repeated in the printed edition, but none in the manuscript.

This manuscript is amongst the earlier known illustrated Yiddish manuscripts. There are several illustrated books printed in Yiddish from 1546-1600, mainly from Italy(Shmeruk 1986, pp. 11-12); and the earliest known Italian Yiddish manuscript with extensive illustrations is the Paris Book of Customs of c.1600 (Wolfthal 2004, p. 6). The Munich Yiddish Bellifortis (BSB Cod. hebr. 235), of the last quarter of the 15th century may be regarded as the earliest known illustrated Yiddish manuscript. Though the Bellifortis manuscript was written by the scribe apparently for his own use, the targeted audience for Yiddish illustrated literature, such as the Jewish Maisses and the Octavian story (BSB Cod. hebr. 100), were men and women of the middle ranks of Jewish society (Wolfthal 2004, p. xxv), rather than just women, young people or children as Shmeruk suggests (Shmeruk 1986, p. 40).

The owners of our Munich Yiddish manuscript, Yitzhak and Eliah, sons of Abraham Ulma (of Ulm) signed their names after the year 1600. From the 15th century on many Jews probably from Ulm bore the name Ulma. The Ulma families owned several manuscripts. Owners' inscriptions by members of the Shlomo Ulma family from the 16th and 17th centuries were found for example in the following manuscripts: (1) The most famous is the earliest complete Talmud known today, copied in France in 1342 (BSB Cod. hebr. 95). The inscriptions there mention Shlomo Ulma (1587/8), his son Shimon and his grandson Eliezer the son of Shimon. This Munich Talmud was kept by the Ulma family in Pfersee near Augsburg for around 200 years (Striedl 1957, p. 23). (2) Another manuscript, an illuminated Pentateuch from Brussels, 1309 (Hamburg, Staats- und Universitätsbibliothek, Ms. Levy, 19) seems also to have been in the possession of Shlomo Ulma, as testified by an inscription by another son, Kalonymus, who reports that he received this manuscript from his father in 1605/1610 (Róth and Striedl 1965, part 3, pp. 3-4). (3) The third manuscript owned by Shlomo Ulma is the Munich Liturgical Pentateuch from the end of the 13th century (BSB Cod. hebr. 2; see CJA Documantation). Another manuscript, a book of Evronot (Intercalation), was written by Shlomo Ulma in Günzburg in 1552 (New York, Jewish Theological Seminary Mic. #9487). 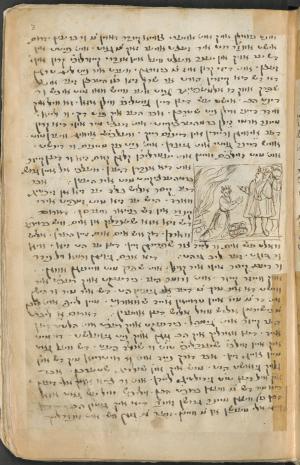 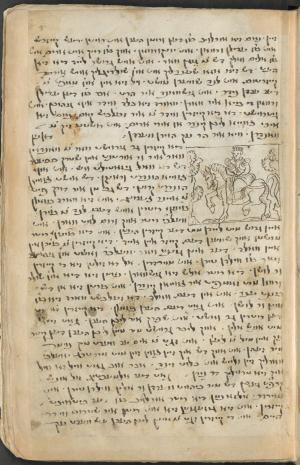 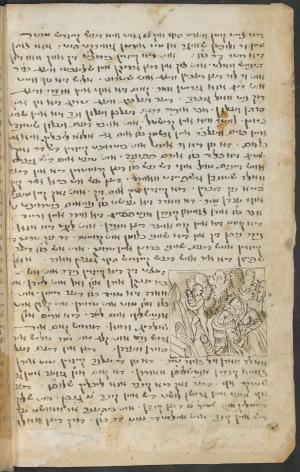 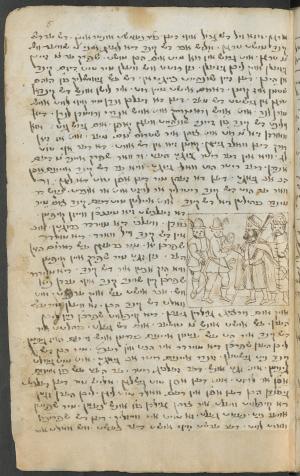 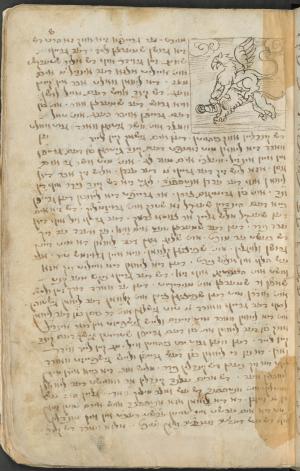 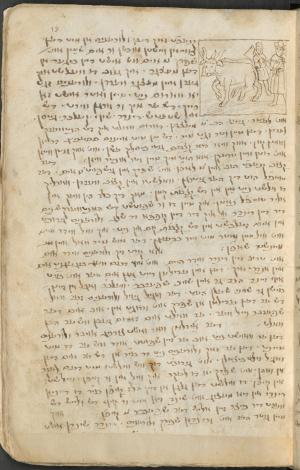 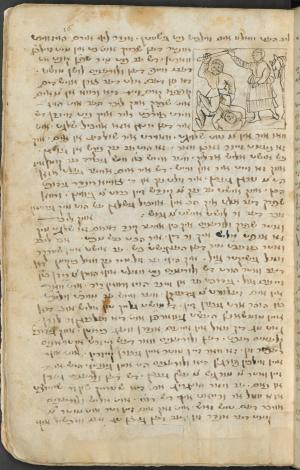 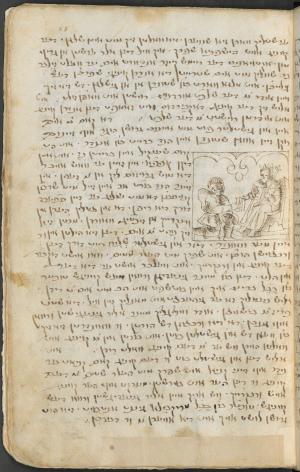 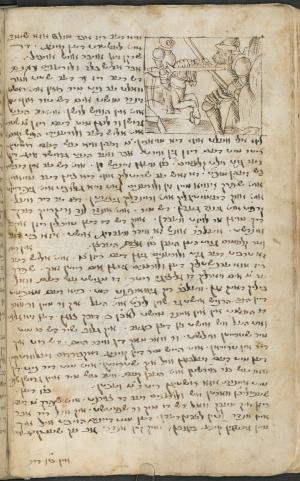 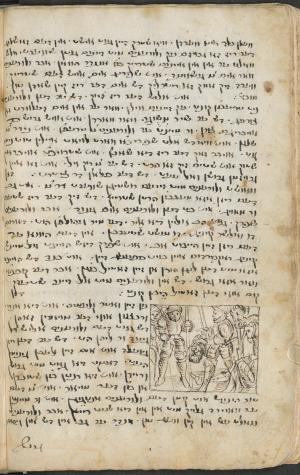 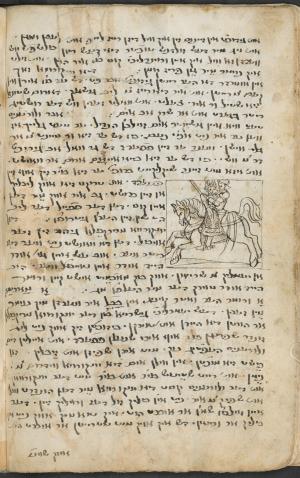 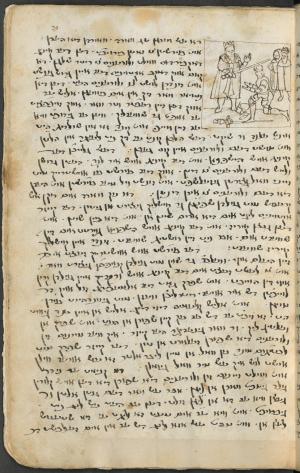 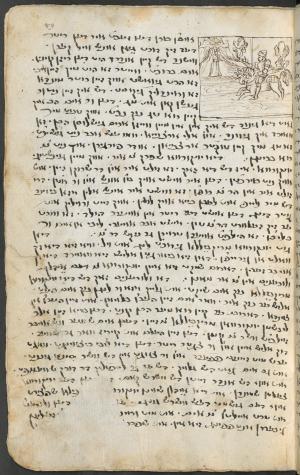 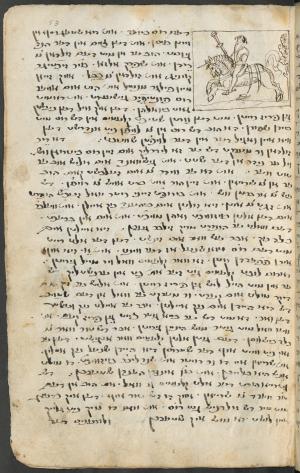 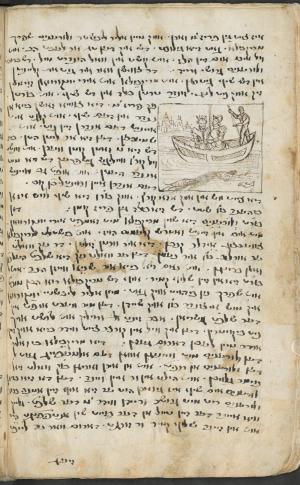 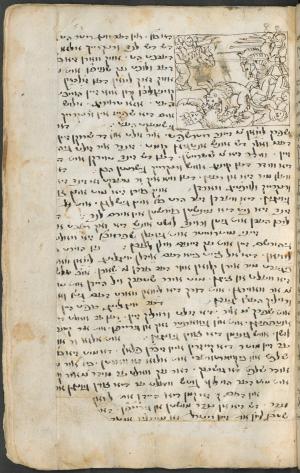 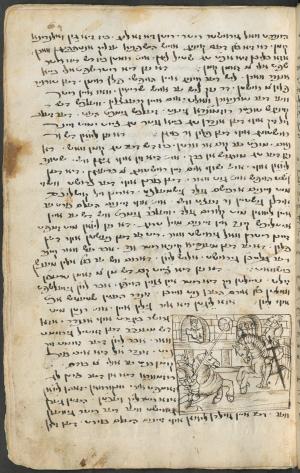 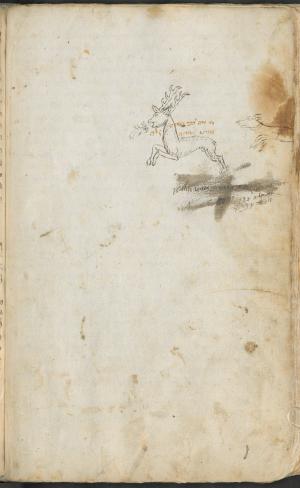 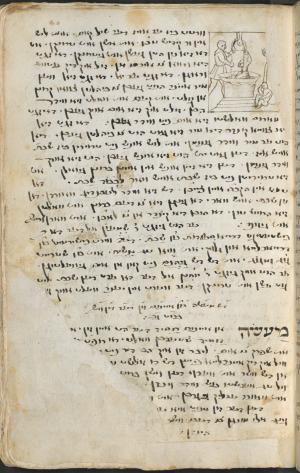 Script
The manuscript is written in semi-cursive Ashkenazi script in the Yiddish spoken in East Swabia between Tübingen and Ulm.

Columns
The text is written in one column.

Note: since the leaves were mostly strengthened in the gutter, no bifolia could be established. The quires were determined according to the sewing in the centre. The tail threads do not correspond to ends of quires.

parallel lines and hatchings. The scenes are composed of two or three main figures and the rest are

partly shown. The panels are placed next to the text they illustrate, and there are no titles, in

contradiction to the printed text,Augsburgc.1568.

Franck,Augsburgc.1568. Four drawings are probably missing at the mutilated beginning of the story